If it’s not reading minds and it’s not magic, then how does it work?

Open AI Codex, a machine learning model that translates natural language into code, powers GitHub Copilot to draw context from comments and code to suggest individual lines and whole functions as you type. Codex is a version of GPT-3 (Generative Pre-trained Transformer 3) fine-tuned for programming tasks. Some of your favorite applications, like Duolingo, use GPT-3 for grammar correction.

For more information on how GitHub Copilot works and its effectiveness, check out the following resources:

Once installed, the extension will suggest code as you type, but what next? How can you optimally benefit from the GitHub Copilot extension?

First, I recommend writing clear, understandable comments to help your AI pair programmer generate desired solutions, but if you’re interested in exploring how to use GitHub Copilot in ways you might not be thinking of, we compiled some fun and valuable use cases we’ve seen in talking with developers. I hope that the following examples inspire you!

GitHub Copilot can understand other languages beyond English! This is helpful for developers of all backgrounds because programming languages are based on American English. For example, the CSS property color is based on American English, so it is unfamiliar for native British-English or Canadian-English speakers who use the spelling ‘colour’. Forgetting the correct spelling and syntax can often result in typos, unexpected errors, and lost time.

Martin Woodward, Vice President of Developer Relations at GitHub, shared this tip with us! GitHub Copilot is great at creating dictionaries of lookup data. Try it out by writing a comment instructing GitHub Copilot to create a dictionary of two-letter ISO country codes and their contributing country name. Writing a comment and the first few lines of code should help GitHub Copilot generated the desired results. See the GIF below for visual representation!

Writing tests is a vital yet sometimes tedious step in the software development lifecycle. Because GitHub Copilot excels in pattern recognition and pattern completion, it can speed up the process of writing unit tests, visual regression tests, and more.

Check out these resources to learn more about using GitHub Copilot for testing:

With GitHub Copilot, you can spend less time fiddling in a Regex playground or combing through StackOverflow to match character combinations in strings. Instead, you can write a comment or a function name to trigger GitHub Copilot’s suggestions.

I used Copilot to help me validate a phone number!

GitHub Copilot can help you remove white space from a string!

While this may sound unorthodox, developers, including myself, use GitHub Copilot to study for interviews.

By adopting this method, I maintain momentum when tempted to quit. Instead of giving up, I gain new perspectives even when I don’t have a mentor or peer to guide me. GitHub Copilot becomes my digital mentor. But, note, that I highly discourage activating GitHub Copilot during an interview (that’s cheating!).

Interestingly, chess players take a similar approach when preparing for matches. It’s common for chess players to practice against AI engines to advance their skills. In the publication, Towards Data Science, Bharath K writes, “Artificial Intelligence has influenced the way in which chess games are played at the top level. Most of the Grandmasters and Super Grandmasters (rated at a FIDE above 2700) utilize these modern AI chess engines to analyze their games and the games of their competitors.” Learn more about the influence of AI chess engines here.

If AI is helping chess players advance their skills, perhaps it can positively impact developers’ problem-solving skills by challenging them to think differently about solving a problem.

You can learn more about leveraging GitHub Copilot to solve algorithmic problems here. In the example below, I wrote a comment that says, “write a binary search algorithm,” and the first line of my function. GitHub Copilot correctly completed the function. 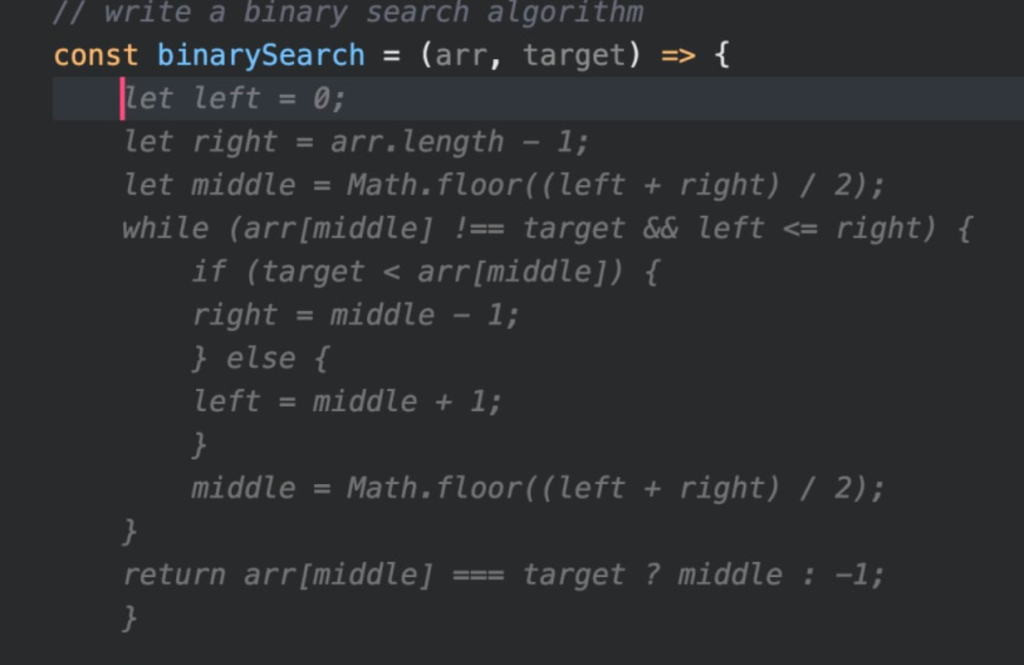 Of course, you can simply use the Twitter application to send a Tweet, but it’s more fun to send a Tweet via your IDE! As a Developer Advocate, part of my job is to create demos. In a recent livestream, I had to demonstrate using Twitter API v2 with GitHub Copilot in Python, a language that I rarely use. GitHub Copilot saved the day and generated the code I needed after I wrote a few comments. Read my DEV post if you want to try sending a tweet with GitHub Copilot, too!

Developers who are new to Vim frequently wonder how to exit the editor. Struggling to exit vim is so common that it’s a meme on the internet! Since GitHub Copilot is available in Visual Studio Code, JetBrains, and Neovim, a forked version of Vim with additional features, you can exit NeoVim using GitHub Copilot. In the video below, Brian Douglas uses GitHub Copilot to exit NeoVim, by writing a comment that says, “How do I exit vim?”

GitHub Copilot Labs is a complementary extension that comes with GitHub Copilot access. The GitHub Next team developed GitHub Copilot Labs, an experimental sidebar, to help developers translate code from one programming language to another and get a step-by-step explanation of code snippets.

There’s no easy method for building a mental model of a new codebase, but these two features within GitHub Copilot Labs can help. By translating code snippets to languages they’re more familiar with and using the ‘Explain’ feature to gain an understanding of the code, developers can better comprehend complex blocks of code. 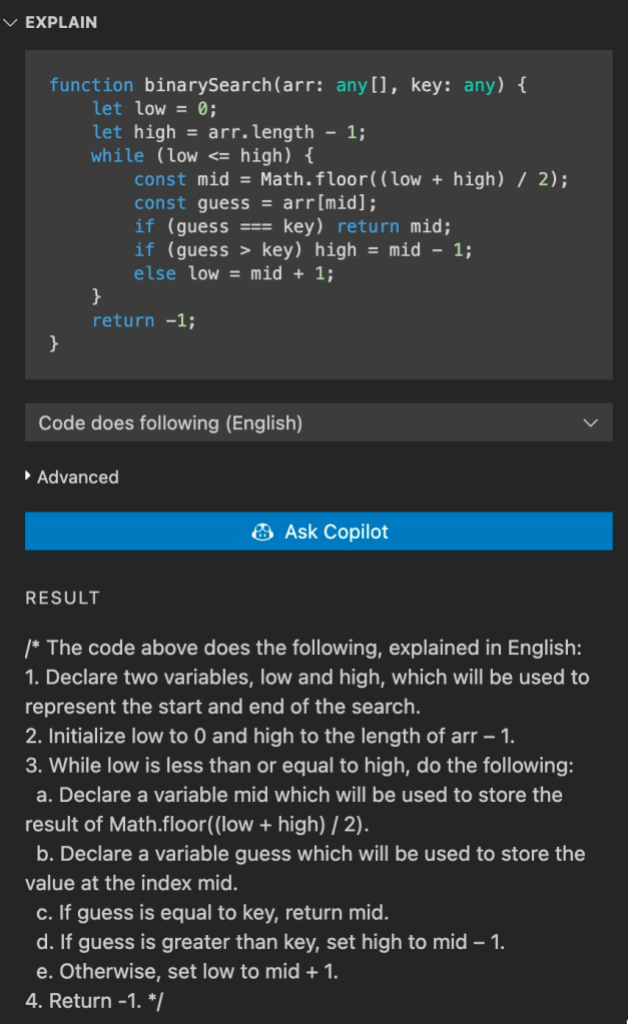 As you’ve seen in the examples above, GitHub Copilot can help you be more productive in so many ways day to day (a lot of which we’re still discovering!), and I want to kindly remind you that GitHub Copilot is an AI pair programmer, so just as you would with your coworkers’ code or even your own, review the generated code before pushing it to production! While GitHub Copilot is powerful, sometimes it makes mistakes or refers to an outdated version of an API. Nevertheless, the team at GitHub continues to work hard and learn from our users to develop a better experience and generate better results with GitHub Copilot. I’m excited to witness and experience the evolution of AI pair programming tools. If you’re just as eager as me, sign up for GitHub Copilot today!

Recently a cool new experimental feature was added to Chrome. We can get an overview of the CSS used on a website. For example: information about CSS elements, external stylesheets, colors, fonts, media queries and also unused declarations (if you want to optimize things you may want to check it out). To activate this new […]

The importance of improving supply chain security in open source

This is part of our Octoverse 2022 report, which explores the state of open source software, its impact on companies, and key trends shaping software development. Over the past several years—and the past year in particular—supply chain security in the open source ecosystem has become a large point of focus for the broader open source […]

After the offer: staying in tech long-term

There are lots of resources to help you land your first tech job, from technical training to interview preparation. But once you’re in, it’s harder to find advice on navigating the industry and staying fulfilled, leaving many tech workers feeling stuck. In fact, research published by TalentLMS and Workable found that in 2022, 72% of […]