The survey found Trump leading Florida Gov. Ron DeSantis (R), in the hypothetical primary race by double digits, 47 percent to 28 percent. However, the survey also showed DeSantis’s support has increased exponentially since May, when he garnered 12 percent support.

However, when Trump is out of the scenario, DeSantis takes the strong double-digit lead with 48 percent support, followed by Pence with 21 percent.

Despite the survey showing DeSantis taking the lead in a situation where Trump is absent, that scenario is unlikely to happen, given the fact that Trump formally announced his 2024 presidential campaign last month. 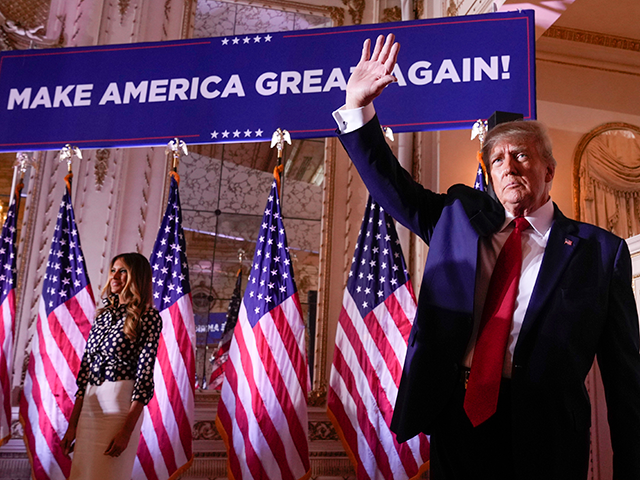 Former President Donald Trump waves after announcing he is running for president for the third time at Mar-a-Lago in Palm Beach, Florida, Tuesday, Nov. 15, 2022. (Andrew Harnik/AP)

During the speech, Trump described the years under Biden as a “time of pain, hardship, anxiety, and despair” as Americans struggle with rising prices and the influx of illegal immigration.

“The decline being forced upon us by Biden and the radical left lunatics is driving us right here into the ground. This decline is not a fate we must accept. When given the choice boldly and clearly, I believe the American people will overwhelmingly reject the left’s path to national ruin and they will embrace our vision for national greatness and glory,” he added.

DeSantis, meanwhile, has shown no immediate signs of running in 2024, but the fact he has not overtly dismissed the speculation has prompted irritation from Trump, who accused the Florida governor of “playing games.” However, DeSantis has dismissed worries over a “civil war” between the two, refusing to respond to Trump and instead telling reporters who asked him about it that “people just need to chill out.”

Spread the love Universal Orlando has settled a discrimination lawsuit last week with two families who alleged its employees dressed as Gru from Despicable Me used a hate symbol in photos taken with their black and Hispanic daughters. Court records do not disclose how much the company settled for. Tiffiney and Richard Zinger, as well as Geisy […]

Spread the love The FBI offered former British spy Christopher Steele “up to $1 million” if he could prove the claims in his infamous dossier, according to a senior FBI analyst’s testimony on Tuesday in Special Counsel John Durham’s criminal probe into the origins of Russiagate. FBI supervisory counterintelligence analyst Brian Auten’s testimony came during […]