Senate Majority Chuck Schumer (D-NY) suggests an amnesty for millions of illegal aliens eligible and enrolled in the Deferred Action for Childhood Arrivals (DACA) program is necessary to spike the United States population even as a record 331.9 million people reside in the U.S.

During a press conference this month, Schumer and other Senate Democrats urged ten Senate Republicans to back an amnesty for 3.3 million illegal aliens enrolled and eligible for Obama’s DACA program — providing them with green cards to remain permanently in the U.S. and, eventually, gain naturalized American citizenship.

As part of that plea, Schumer said an amnesty for millions of illegal aliens is necessary to drive up the U.S. population and low birth rates among Americans.

“… we have a population that is not reproducing on its own at the same level that it used to,” Schumer said. “The only way we’re going to have a great future in America is if we welcome and embrace immigrants, the DREAMers, and all of them.”

Schumer also said the Democrats’ “ultimate goal” is to provide amnesty to all 11 to 22 million illegal aliens living across the U.S. 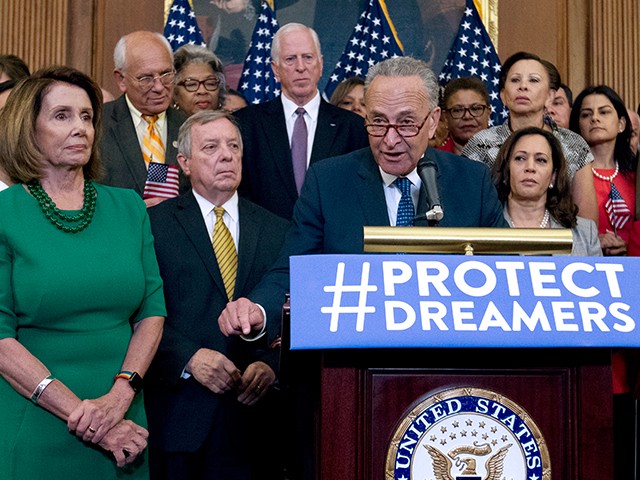 The suggestion comes as the U.S. population has increased to the highest total in history, hitting 331,893,745 residents in 2021, driven mostly by legal immigration. For comparison, the population in 1970 stood at 203 million residents.

“The total fertility rate for all women (immigrant and native-born) in America in 2019 was 1.76. Excluding immigrants, it would be 1.69 — the rate for natives. The difference is .06 children, or a 4 percent increase in overall total fertility rate in the United States,” Center for Immigration Studies research shows, suggesting more immigration would have a minimal impact on the nation’s low birth rate.

Unmentioned by Democrats, as well as many Republican lawmakers, is crafting a national family agenda that would help boost American birth rates. Hungary’s government has implemented such an agenda, focusing on economic initiatives to make it less expensive for parents to raise children while working.

Spread the love A recent poll found that Hispanic conservatives would favor Republican control of Congress over Democrat control by 56 points, giving the Republicans a 65-point swing in the past decade. Conservative Hispanics have shifted from lean-Democrat voters to Republican-base voters. As NBC News reported: In the merged NBC News/Wall Street Journal polls of 2012, […]

Spread the love House Speaker Nancy Pelosi (D-CA) announced Thursday she will not seek reelection as the Democrat House leader. “This I will continue to do as a member of the House speaking for the people of San Francisco, serving the great state of California, and defending our Constitution, and with great confidence in our […]

Spread the love Rep. Elise Stefanik (R-NY) applauded the Pentagon for looking into recently surfaced remarks disparaging white people made by the chief of diversity, equity and inclusion for the Department of Defense’s K-12 school system, after she and another Republican congressperson sent a letter to DOD. “Following House Republicans’ advocacy, the Department of Defense […]