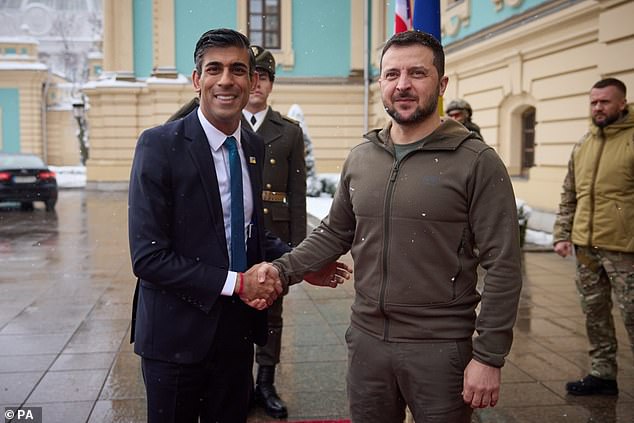 Russia has said it no longer wants to change the government in Ukraine, despite regime change being a key early objective of Vladimir Putin’s invasion.

At the beginning of the war, Putin sent troops into Ukraine with the objective of overthrowing the Ukrainian government and installing a Russia-friendly regime.

But now, nine months into Russia’s invasion of Ukraine, Kremlin spokesperson Dmitry Peskov said Russia ‘does not intend the “special operation” to change the government in Ukraine’, Sky News reports.

When asked whether one of the goals of Putin’s invasion of Ukraine is regime change in Ukraine, Peskov responded: ‘No [it is not], the president has already spoken about this.’

Peskov’s comments mark the latest climb-down of Putin’s ambitions since the beginning of his war in Ukraine.

Moscow had aimed to overthrow the Ukrainian government, but Russia’s setbacks on the battlefield and stretched resources in Ukraine means that Putin has had to peddle back on his initial objectives.

Russian Foreign Minister Sergei Lavrov said at the beginning of the invasion that regime change in Ukraine was not the goal – but in July he made contradicting comments.

Lavrov said in July that Moscow’s overarching goal in Ukraine is to free its people from its ‘unacceptable regime’.

‘We are determined to help the people of eastern Ukraine to liberate themselves from the burden of this absolutely unacceptable regime,’ Lavrov said, referring to Ukrainian President Volodymr Zelensky’s government.

He added: ‘We will certainly help the Ukrainian people to get rid of the regime, which is absolutely anti-people and anti-historical.’

Putin’s climb-down in his war objectives comes weeks after a grinding offensive by Ukrainian soldiers forced Russian forces to flee from the city of Kherson in one of Kyiv’s biggest successes in the nearly nine-month war.

And in a key battlefield development, a Ukrainian official acknowledged that Kyiv’s forces are attacking Russian positions on the Kinburn Spit, which is a gateway to the Black Sea basin and parts of the southern Kherson region that are still under Russian control.

Despite an information blackout around the operation, Natalya Humenyuk, a spokesperson for the Ukrainian army’s Operational Command South, said in televised remarks that Ukrainian forces are “continuing a military operation” in the area.

Moscow has used the Kinburn Spit as a staging ground for missile and artillery strikes on Ukrainian positions in the Mykolaiv province, and elsewhere along the Ukrainian-controlled Black Sea coast.

Capturing the Kinburn Spit could help Ukrainian forces push into territory Russia still holds in the Kherson region “under significantly less Russian artillery fire” than an attempt at a direct crossing of the Dnieper would likely unleash, a Washington-based think tank said.

The Institute for the Study of War added that control of the area would help Kyiv alleviate Russian strikes on Ukraine’s southern seaports and allow Ukraine to increase its naval activity in the Black Sea.

In the partially occupied Donetsk region, the city of Avdiivka was most affected by the shelling, Donetsk regional Governor Pavlo Kyrylenko said on Telegram.

The city was hit by several strikes overnight and a massive artillery barrage early in the morning. No casualties were reported, according to the official.

The governor of the Sumy region, Dmytro Zhyvytskiy, said a total of 86 projectiles were fired at the region overnight. The Russian forces targeted several villages with mortar fire, he said. No casualties were reported there, either.

In Dnipropetrovsk, the cities of Nikopol and Marhanets came under fire overnight, according to Gov. Valentyn Reznichenko, with the Russian forces firing some 60 projectiles.

No casualties were reported, and the official didn’t offer any details on the extent of the damage.

Spread the love Palestinian Foreign Affairs Minister Riyad al-Maliki claimed Israel is ‘injecting irreversible change’ in the State of Palestine while the international community is distracted by the conflict in Ukraine during a panel meeting at the Rome Mediterranean Dialogue forum on Friday. “As long as the world is focusing on somewhere else, then the […]

Spread the love A 62-year-old American woman was pronounced dead after a “rogue wave” slammed into a Viking cruise ship en route to Antarctica. The “rogue wave incident” occurred at around 10:40 p.m. Tuesday as the Viking Polaris was sailing to Ushuaia, Argentina–approximately 2,000 miles south of Buenos Aries–before departing for Antarctica next week, Viking said […]