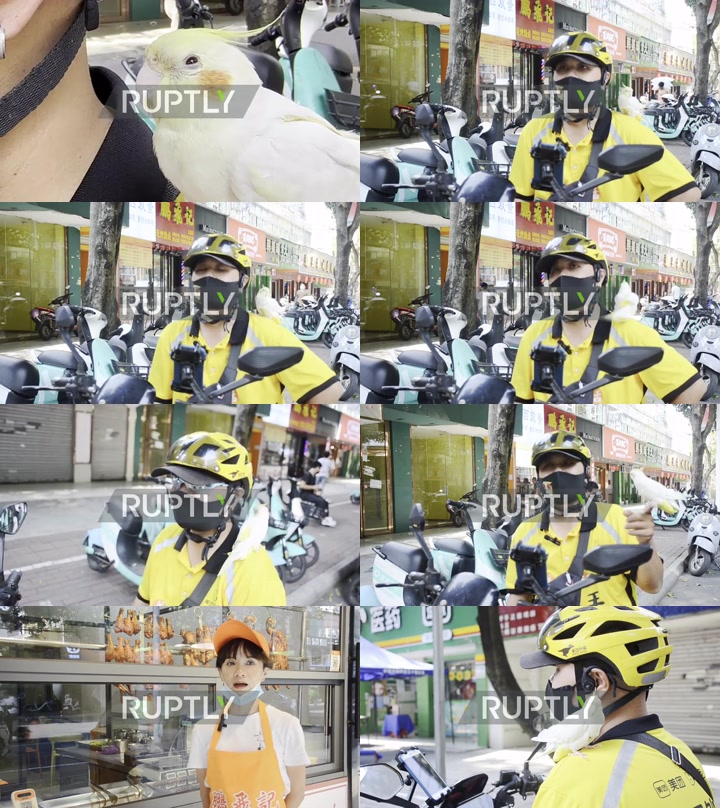 A parrot named Bigu became a sensation in China after videos of the animal accompanying its owner, a food delivery man, went viral on social media. The pet bird stands loyally at the man’s shoulder as he rides his motorbike around the city of Nanning, in southern China.

Bigu’s owner, Haibo Nong, said his friends gifted him the bird when it was just one month old, and he took care of it ever since.

“I felt bored so I took it out to play. I found it on my shoulder and it would not fly away, so I liked to go out with it”, Nong said.

Now, Bigu has become Nong’s regular co-worker and joins him as he delivers food around the city.

“On the way to work, it would whistle to me, so I would not feel lonely. With a partner around, it felt a little easier to work”, Nong said.

The parrot even has its own ‘work clothes’, little costumes that Nong sews together. The little outfit also serves as a diaper.

Bigu belongs to one of the most common races of birds in China, the Nymphicus hollandicus, commonly known as ‘cockatiel’ or ‘cockatoo’.

Spread the love Russia’s Soyuz 2.1a rocket lifts off from Baikonur Cosmodrome in Kazakhstan, carrying the Progress 82 (MS-21) cargo spacecraft, on Wednesday, October 26. The mission is delivering supplies to the International Space Station (ISS), and will feature the first use of the ‘single-turn’ scheme allowing for a fast, automatic rendezvous and docking. This […]

Spread the love   Vladimir Putin announced a “partial” mobilisation on September 21 with 300,000 reservists to be called up – but reports said up to one million people could be enlisted. Russian soldiers have reportedly been sent to war with “rusty and mouldy” weapons. After Vladimir Putin announced a “partial” mobilisation earlier […]

Spread the love Thousands of people in the North Kivu province have been forced to flee their homes amid skirmishes between the Armed Forces of the Democratic Republic of the Congo (FARDC) and suspected members of the M23 rebel group, as seen in footage captured in the village of Kibati on Friday. Displaced families could […]