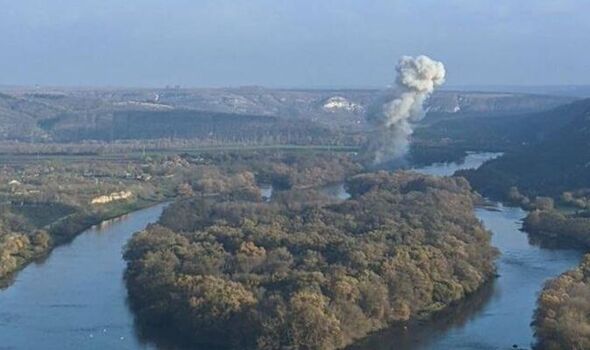 This is believed to be the first incident of the impact of the Ukraine war spilling outside the country’s internationally recognised borders.

A Russian missile that targeted Ukraine landed in nearby Moldova in what has been called the first “spillover” of the Ukraine war into a nearby country. On Monday morning, Moscow launched a wave of missile attacks across Ukraine, including in the capital, Kyiv.

Damage to civilian infrastructure, power networks and water supplies were reported from Lviv in the west, across to Kharkiv in the north-east and down to Zaporizhzhia in the south of Ukraine and Vinnytsia in the central part of the country.

The missile landed in the village of Naslavcea, which is in the very north of Moldova.

The village, right on the border with Ukraine, has the two Ukrainian cities of Chernivsti and Vinnytsia as its closest major hubs in Ukraine, both of which were targeted on Monday by Russian missiles.

There have been no casualties reported, but several buildings have been damaged.

The ministry said in a statement: “So far there are no reported victims, but the windows of several houses in Naslavcea were destroyed.”

Journalist Isobel Kushiw, reporting from Ukraine, called the incident “the first spillover since the war began”.

Earlier this month, the Moldovan government accused Moscow of violating its airspace with missile attacks destined for Ukrainian territory.

“The appalling strikes on critical infrastructure reverberate beyond Ukraine’s borders and pose a direct threat to Moldova’s energy – and human – security.”

He said the missile had landed in Moldova after being fired at Ukraine’s Dnipro Hydroelectric power plant in Zaporizhzhia.

Moldova, a former Soviet state, has close ties with Western countries and applied for EU membership status within days of the Kremlin launching its invasion of Ukraine in February.

Moldova has a small region, Transnistria, which is considered a breakaway area closely aligned with Russia.

Earlier this month, NATO’s deputy secretary-general said he valued “Moldova for its contributions to international security”, and emphasised “NATO’s commitment to deepening its partnership with [Moldovan capital] Chișinău”.

On Monday morning, Moscow unleashed a series of missile attacks on various cities across Ukraine, wiping out power and water supplies for swathes of people, according to Ukrainian authorities.

Ukraine’s air command said the country’s defence systems had shot down 44 out of 50 cruise missiles as air raid sirens across the country warned residents to take shelter.

Oleksiy Kuleba, the governor of Kyiv, said one person had been confirmed dead as Kyiv mayor, Vitaliy Klitschko, said 80 percent of residents in the capital have lost access to water supplies.

Spread the love Dozens of members of the European Confederation of Trade Unions as well as French and Belgian trade unions gathered in front of the European Parliament in Strasbourg on Wednesday to protest against the difficulties faced by workers due to the energy crisis that Europe is facing. “Workers and the unions throughout Europe […]

Spread the love Street marshals directing crowds of football fans from all over the planet in Doha streets have become one of the symbols of the FIFA 2022 World Cup in Qatar while their chants “Metro, this way” have turned into an unofficial soundtrack for the football tournament. What started with monotonous shouts by so-called […]

Spread the love   Russian President Vladimir Putin is preparing to call up one million Russian soldiers to fight in the war in Ukraine, a Russian newspaper has claimed. The report comes after military analysts identified a classified paragraph in Putin’s “partial-mobilisation” decree. In a televised address to the nation on Wednesday, the […]