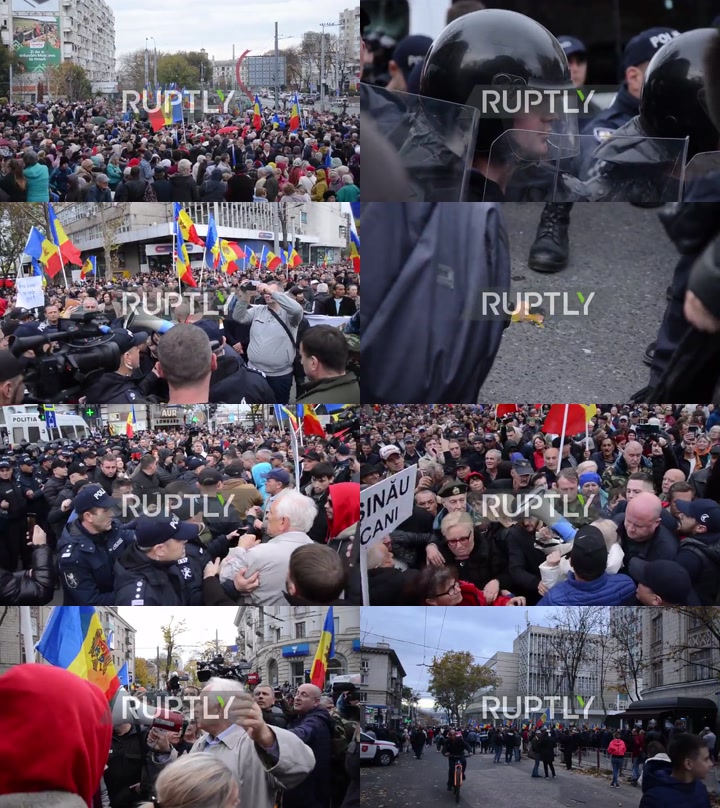 Dozens of protesters were detained by police during an anti-government rally in Chisinau on Sunday.

Footage shows detentions of demonstrators, including Chairman of the Shore Party Valery Klimenko as well as rally participants march with Moldovan flags.

According to the Shor Party, the number of protesters reached 65,000 people.

“He [Klimenko] was attacked by law enforcement and taken to the police inspectorate. An ambulance was called to the inspectorate to give him first aid. The local elected official’s condition is unknown at this time,” the organisation said on its website.

Moldovan police reported in its Telegram channel, 51 demonstrators were detained before the beginning of the rally and another 28 protesters were taken to police departments during the rally.

“People attending the protest are trying to destabilise the situation and incite hatred among the participants. They are trying to break through the police cordon and do not obey. Eggs, condoms and other objects are being thrown at the police,” the department said.

According to media reports, the police released the Shor party leaders hours after they were detained.

The tent protests in Chisinau have been ongoing since September, while mass anti-government rallies first began in the country in May over soaring energy and food prices, as well as falling living standards and record inflation.

Earlier this month, Moldovan President Maia Sandu asked the Cabinet of Ministers to expand the powers of the police so that security forces could disperse protests without the consent of the local authorities.

Last month, she called on law-enforcement agencies to “promptly identify the sources of illegal financing of those who pay for participation in protests and severely punish any attempts at aggression, provocation or destabilisation”.

According to media reports, rallies which close roads or restrict access to public buildings are now banned on weekdays, while weekend protests are limited to four hours.

DRC: Thousands of Сatholics march against M23 group in Kinshasa after deadly attacks

Spread the love Thousands of Catholics marched against alleged Rwandan support of M23 group in Kinshasa, on Sunday, after a series of deadly attacks in North Kivu earlier this week. The participants in the protest, which was organised by DRC Catholic Church, were seen marching while holding DRC flags, crosses and banners writing ‘No to […]

Spread the love Head of the Iranian Atomic Energy Organisation Mohammad Eslami claimed that work had started on ‘enriching uranium to 60 percent purity’ at the Fordow site, during a briefing at the facility outside Qom on Tuesday. Eslami said the action was taken ‘in response to the resolution’ passed by the International Atomic Energy […]