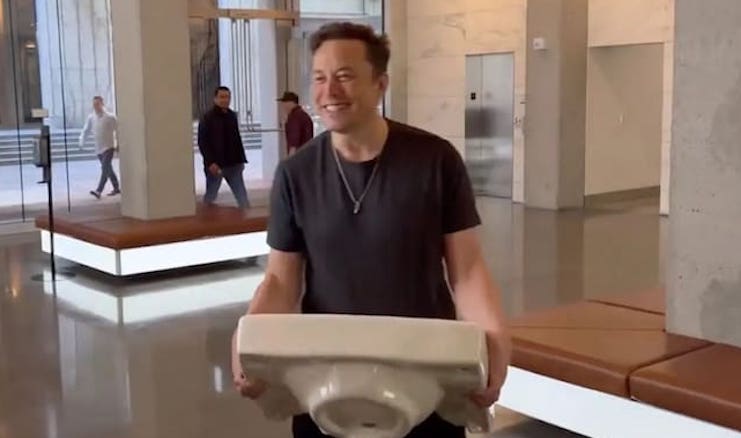 Hundreds of woke Twitter employees have deserted the company and gone to work for Google and Meta over the past few months in anticipation of Elon Musk taking over the company, according to a Business Insider report.

The piece notes that in the past three months, a total of 530 Twitter employees have left, with many running directly to the tech giant’s direct competitors.

Over 1,100 employees have left Twitter since Musk announced his intention to buy the company back in January, with almost a third going to Google or Meta.

The figures come from a new analysis of LinkedIn data, with the report noting that other workers have moved to the likes of Pinterest, LinkedIn, Snap, and TikTok.

Musk, who has vowed to complete the Twitter acquisition by Friday, has said he intends to make huge staff cuts of up to 75% anyway, cutting worker numbers from around 7,500 to around 2,000 employees.

The Washington Post also notes that even if Musk doesn’t close the deal, Twitter officials have planned a $800 million cut in payroll by the end of 2023 regardless.

Musk previously mocked work-from-home enthusiasts at Apple with a lazy dog meme, and also stated that constantly working remotely is “phoning it in,” informing employees they can collect their belongings if they disagree.

In an email to Tesla employees earlier this year, Musk wrote “Remote work is no longer acceptable,” except in extreme cases.

“Anyone who wishes to do remote work must be in the office for a minimum (and I mean *minimum*) of 40 hours per week or depart Tesla,” he wrote in correspondence then leaked by Tesla shareholder Sam Nissim.

Musk confirmed that the email was authentic and doubled down, saying anyone unhappy with it should “pretend to work somewhere else”:

Musk has promised that “work ethic expectations” at Twitter will be “extreme” when he takes over:

Yesterday, Musk was filmed entering Twitter HQ literally carrying a sink. He tweeted the footage with the caption “let that sink in,” clearly an effort to trigger his detractors:

Argentina: ‘People have to decide if they want that Argentina again’ – Kirchner addresses thousands of supporters on Peronist Day

Spread the love Around 6,000 people gathered to support Argentinian Vice-President Cristina Fernandez de Kirchner at the Diego Maradona Stadium in La Plata on Thursday, marking Peronist Militancy Day. During the gathering, the former president called to ‘go back’ to the Argentina led by ‘Kirchnerism’ — a political movement she represented together with her husband […]

Spread the love From withdrawal from the Iran nuclear deal to recognising Jerusalem as the capital of Israel, former US President Donald Trump was counting his list of victories for Israel whilst being in office, as he addressed the Republican Jewish Coalition (RJC) via video-link in Las Vegas on Saturday. “I withdrew from the one […]