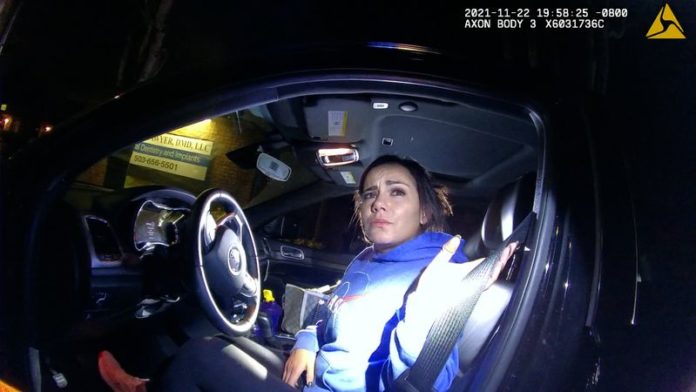 Gladstone, Oregon – (Scroll down for video) — On November 22, 2021, just before 8 p.m., Gladstone Police Officer Clement Lau pulled over now 37-year-old Yvette Lares Garcia after she did not stop at a stop sign. During the stop, Officer Lau learned Garcia had an extraditable warrant from Texas and took her into custody. After Gladstone Sgt. Travis Hill arrived to the scene, Garcia told officers she was concerned about her two pit bulls alone at her home. Officers agreed to stop at her home on the way to jail to secure her dogs for Clackamas County Dog Control.

The officers arrived at the home with Garcia. She was in handcuffs at the time. They enter the home through the garage and the dogs rushed out. The dogs barked at the officers, one growling. Garcia recommends getting leashes for her pets. With her hands behind her back and in handcuffs, Garcia walked upstairs to get a leash. Garcia drew Sgt. Hill’s attention away from her for a moment and was able to grab a 9mm semi-automatic handgun from a nearby nightstand.

Garcia said she would not go back to jail and then shot Sgt. Hill in the lower leg. The two officers then exchanged gunfire with Garcia, yelling at her multiple times to drop the gun. Moments later, backup arrives, and Officer Lau rushed in to help his partner. Garcia was hit in the torso multiples times and taken to the hospital for treatment.

Officer Lau was not injured, but Sgt. Hill was shot in the leg and grazed on the arm. Hill’s leg wound caused permanent injury and he left law enforcement.

On. October 12, 2022, Clackamas County Circuit Judge Cody M. Weston sentenced Garcia to 10 years in prison, the maximum sentence allowed for attempted aggravated murder under Oregon law. She is also required to pay Hill a $50,000 compensatory fine for injuries that caused permanent injury. Texas officials intent to extradite Garcia for allegedly embezzling $1.4 million from an oil company where she worked in Ector County.

David Limbaugh Unpacks What Led Him From Christian Skeptic To Believer

Spread the love Advertisement OPINION: This article may contain commentary which reflects the author’s opinion. The brother of the late conservative talk radio king Rush Limbaugh has described his heartwarming journey from Christian skeptic to a true believer in a recently released book he co-wrote with his daughter. David Limbaugh and Christen Limbaugh Bloom reveal […]

Spread the love Advertisement OPINION: This article may contain commentary which reflects the author’s opinion. President Joe Biden caused another social media stir this week over what many claimed was a false statement about high gas prices in California. “Have you seen gas prices around here in L.A.? It’s almost $7 bucks a gallon almost,” […]