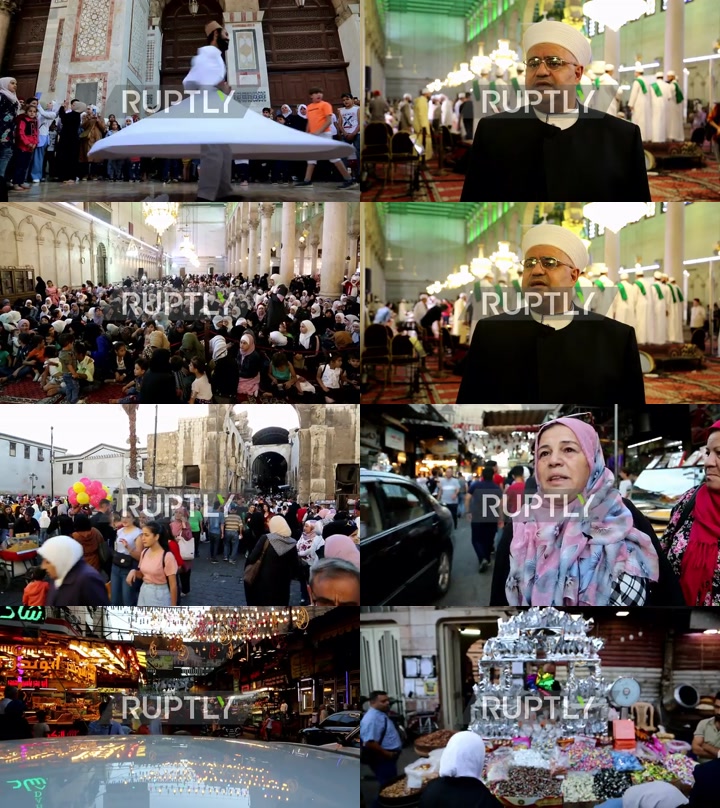 Thousands of Damascus residents flock to the ancient Umayyad Mosque in Old Damascus to celebrate the birth of the Prophet Muhammad on Saturday.

People gathered in the courtyard of the great mosque to hear religious songs and then went out to the markets in Old Damascus to buy sweets to celebrate this occasion.

“This mosque gathers the largest number of people because of its vastness and because it is located in an area people visit this day,” said Dr Khader Shahrour the Director of Endowments in Rural Damascus.

“you find this huge number, which is an expression of love and joy [to Prophet Muhammad], despite all the circumstances that you see of wars, disasters and illnesses, people are defying difficulties,” added Dr Khader Shahrour.

The occasion is celebrated widely in Damascus, where the residents usually flock to the old markets and enjoy the Mevlevi Order.

“The atmosphere in the Umayyad Mosque and Jasmiyah in Al-Midan is very beautiful and makes you feel the religion and this great memory,” said one of the locals in the market, Um Ahmad.

The prophet’s birthday, also known as Mawlid al-Nabawi al-Sharif, is generally celebrated by Sunni Muslims each year on the 12th day of Rabi’ al-Awwal, the third month of the Islamic calendar, while Shia Muslims celebrate it on the 17th.

On Mawlid, Muslims from all around the world pray and read the Quran to mark the birth of Muhammad, who was born in 570 AD.

Indonesia: ‘Extremely relevant development but we are not involved’ – Guterres on speculation of Russia-US talks in Ankara

Spread the love United Nations Secretary-General Antonio Guterres said that his organisation had played no part in any talks between the United States and Russia after media reports suggested the two countries were holding discussions in Ankara while speaking during a press briefing in Bali on Monday. “There are reports of talks taking place between […]

‘We drive out the winter and evil spirits!’ – Demon-like Perchten and Krampus folklore figures parade in Vienna

Spread the love Thousands gathered to watch demon-like figures of German folklore – the Perchte and the Krampus – parade for the annual ‘Perchtenlauf’ (‘Run of the Perchten’) at the Prater fun fair in Vienna on Sunday. Footage shows the creatures, with their wooden masks and fur costumes, interacting with the crowds and scaring and […]

Spread the love   Russia’s invasion of Ukraine has contributed to a worldwide economic crisis and brought Europe closer to a continent-wide conflict. Vladimir Putin has drastically reduced gas supplies to Europe – the EU previously imported 40 percent of its gas from Moscow. In October, Russia was accused of being behind the […]