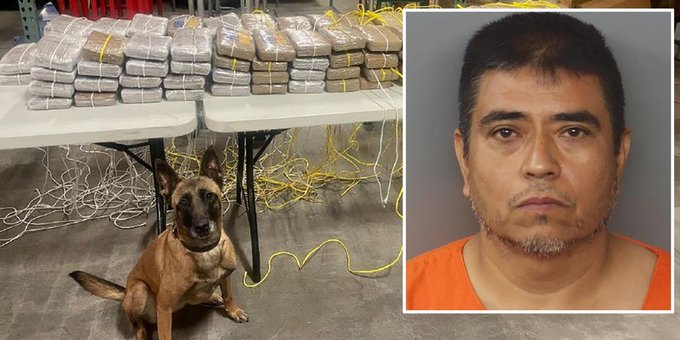 State Police called it the largest seizure in decades

During the investigation, IMPD Interdiction Detectives used an IMPD narcotics K-9 (Mina) who made a positive indication of narcotics odor on the semi-tractor and trailer in question. Officers contacted the driver, later identified as 50-year-old Mauro Alonzo-Vargas of Ennis, Texas. Interdiction detectives continued the investigation, and a search warrant was granted for the semi-tractor and trailer. The operator of the semi-tractor trailer, Alonzo-Vargas, was arrested and sent to the Hendricks County Jail.

The Hendricks County Prosecutor’s Office will review the case and make a final charging decision.

“This investigation indicates the great work of our Interdiction Detectives and the partnerships they have formed with other agencies to locate and remove illegal narcotics off the streets. IMPD continues to dedicate resources to combat crime with technology and the support of our community.” said IMPD Chief Randal Taylor.

Presidential election important ‘for democracy, not only for Brazil but for the continent’ says OAS chief – Market Subset News

Ruben Dario Ramirez Lezcano, head of the Electoral Observation Mission (EOM) attended a press conference in Sao Paulo on Wednesday, where he discussed the EOM’s procedures for auditing Brazil’s electoral process during the upcoming presidential elections. The EOM head told journalists that he had already been engaged in important conversations with presidential hopeful Luiz Inácio […]