ROME — The war between Russia and Ukraine has provoked a series of collateral crises around the world, Pope Francis asserted Friday.

In a message to politicians participating in a high-level conference on geopolitics in Rome, the pontiff contended that the “dramatic military conflict” between Russia and Ukraine has caused an energy crisis, a financial crisis, a humanitarian crisis, and a food crisis.

Along with the “incalculable damage caused by any war in terms of victims, civilian and military,” he said, the war on Ukraine “has given rise to the energy crisis, the financial crisis, the humanitarian crisis for many innocent people forced to leave their own homes and to lose their most cherished possessions, and the food crisis, afflicting a growing number of people throughout the world, especially in the poorest countries.” 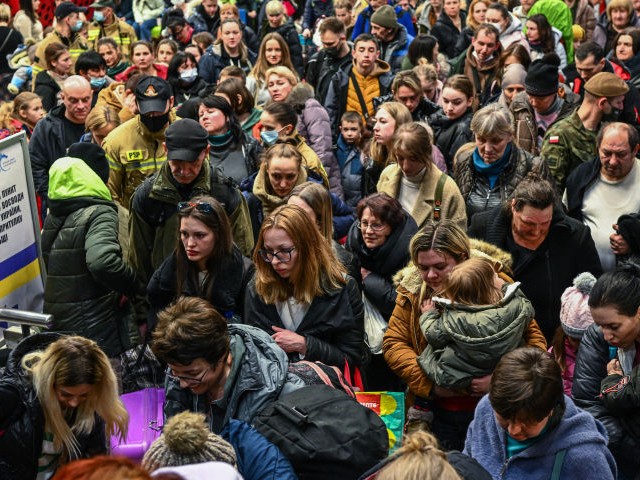 People who fled the war in Ukraine walk towards a humanitarian train to relocate refugees to Berlin on March 15, 2022, in Krakow, Poland. More than half of the roughly 3 million Ukrainians fleeing war have crossed into neighboring Poland since Russia began a large-scale armed invasion of Ukraine on February 24, 2022. (Omar Marques/Getty Images)

With regard to the food crisis, the pope told participants in the Rome MED Dialogues Conference, cosponsored by the Italian Ministry for Foreign Affairs and the Institute for International Policy Studies, that it has been especially damaging for those countries that depend on Russia and Ukraine for foodstuffs.

“The Ukrainian conflict is in fact having enormous repercussions in the North African countries, which depend on Ukraine and Russia for 80% of their grain,” he said. “This crisis urges us to take into consideration the whole situation from a global perspective, just as the effects are global.”

Just as “it is unthinkable to tackle the energy crisis separately from the political one, at the same time it is not possible to resolve the food crisis in isolation from the persistence of conflicts, or the climate crisis without taking into account the migration problem, or the relief of the most fragile economies, or the protection of fundamental freedoms,” he said, reiterating his conviction that all global crises are interrelated.

“Nor can we consider the vastness of human suffering without taking into account the social crisis, where, for economic or political gain, the value of the human person is diminished and human rights are trampled underfoot,” he added.

Along with his considerations regarding war, Francis also reflected on the importance of immigration for the Mediterranean nations.

“Migration is essential for the wellbeing of this area, and cannot be stopped,” he argued. “Therefore, it is in the interest of all parties to find a solution that encompasses the various aspects and the just demands, that is advantageous to all, and that guarantees both human dignity and shared prosperity.”

The failure to find common solutions to human mobility in the region “continues to lead to an inadmissible and almost always avoidable loss of human lives, especially in the Mediterranean,” he declared.

Hundreds of migrant workers gathered in a dedicated fan zone to watch Qatar’s World Cup match against Senegal in Doha on Friday. Migrants workers could be seen cheering as they filled the stands of Asian Town Cricket Stadium turned into a fan zone for the host country’s match against the African Champions. “I have come […]