A raccoon attacked a little girl in Ashford, Connecticut, on Friday, but her mother quickly came to the rescue.

An outdoor camera showed the animal attached to the child’s leg as she screamed in terror and tried to throw it off of her, Fox 61 reported.

However, her mother rushed over and grabbed the raccoon by the scruff of its neck. She held the child and the animal in the air for several moments until she was able to push the girl inside to safety.

The woman tried to throw the animal into the yard but was initially unsuccessful and yelled to others nearby, “It’s a rabid raccoon! Get in the house!”

The raccoon hissed and appeared to grab at the woman’s hands as she maintained her grip on its neck. Moments later, she tossed it into the yard where it rolled over a few times then crawled out of sight.

The family later told social media followers they would be getting tested for rabies after the “unprovoked raccoon attack.” 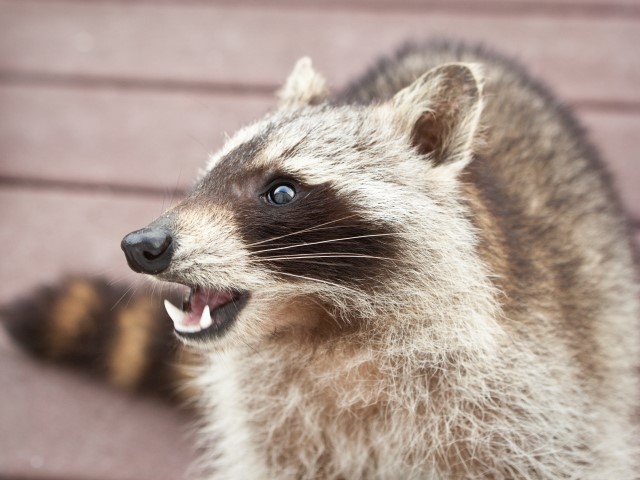 A raccoon shows some of its teeth. (Getty Images Plus)

Per the Fox report, it was unknown if the raccoon had rabies, but the mother and her child got a rabies shot.

According to officials with Ashford Animal Control, the creature has yet to be captured.

A similar instance happened last year when a rabid raccoon attacked a South Carolina man, cutting his leg with its claws, WCNC reported.

It is not uncommon for the animals to be active during daylight hours but it is rare for a raccoon to show aggression toward a human, according to the Humane Society of the United States.

“A raccoon who appears ill or disoriented, or who engages in unprovoked aggression, may be rabid or infected with canine distemper or feline parvovirus,” the society explained while urging people who come into contact with a wild animal to get help from animal control and health department officials.

In April 2021, a North Carolina man tossed, then shot a rabid bobcat when the animal attacked his wife, Breitbart News reported.

“He saved my life. I don’t know where I’d be or what sort of shape I’d be in had he not been there,” the woman said of her husband, adding, “It could have been so much worse. It could have been one of the little girls that lives just a few houses down.”

Maricopa County Board of Supervisors Chairman Bill Gates told CNN Thursday that vote tabulations in the county will carry over into next week. Gates spoke with CNN’s Sara Sidner live on air just after 11:00 a.m. local time and noted that there were some 400,000 remaining ballots to be tabulated in Maricopa, including 290,000 early […]

German government spokesperson Wolfgang Buchner expressed a belief that Italy will not cease to be a ‘Europe-friendly country’ after the snap elections held in the country, during a press conference in Berlin on Monday. “We must first wait for the official final result of this election as well, and then look at it, so to […]

Advertisement OPINION: This article may contain commentary which reflects the author’s opinion. Republicans are taking the lead as many parts of the country are struggling under Democrats’ rule. “Iowa Republican Gov. Kim Reynolds holds a massive 17-point lead over her Democrat challenger Deidre DeJear with less than four months before the November election,” according to […]