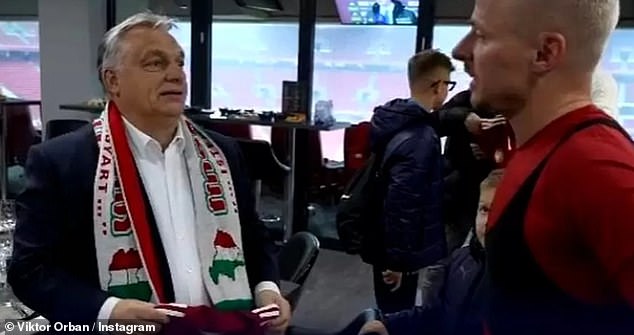 Ukraine will summon the Hungarian ambassador to protest that Prime Minister Viktor Orban went to a football match wearing a scarf depicting some Ukrainian territory as part of Hungary, the Ukrainian foreign ministry said on Tuesday.

Ukrainian media showed images of Orban meeting a Hungarian footballer wearing a scarf which the outlet Ukrainska Pravda said depicted a map of ‘Greater Hungary’ including territory that is now part of the neighbouring states of Austria, Slovakia, Romania, Croatia, Serbia and Ukraine.

‘The promotion of revisionism ideas in Hungary does not contribute to the development of Ukrainian-Hungarian relations and does not comply with the principles of European policy,’ Ukrainian ministry spokesperson Oleg Nikolenko wrote on Facebook.

Nikolenko said Ukraine wanted an apology and a rebuttal of any Hungarian claims on Ukrainian territory.

He added Hungary’s ambassador ‘will be informed of the unacceptability of Viktor Orban’s act’.

‘[Football] is not politics. Do not read things into it that are not there,’ he wrote. ‘The Hungarian national team belongs to all Hungarians, wherever they live!’

The two countries have repeatedly clashed in recent years over what Hungary said were curbs on the right of ethnic Hungarians living in Ukraine to use their native tongue, especially in education, after Ukraine passed a law in 2017 restricting the use of minority languages in schools.

The Hapsburg Empire, centered within Austria-Hungary, annexed what is now Ukrainian territory during the Third Partition of Poland in 1795, naming it West Galicia. Lviv was the provincial capital.

A spokesperson from the Austrian Ministry of International Affairs told POLITICO: ‘A quick glance at historical maps in the Viennese Ministry of Foreign Affairs has confirmed initial suspicions, according to which Translithania (the Kingdom of Hungary) ceased to exist around 100 years ago.’

‘We will inform our Hungarian neighbours of this development at the earliest opportunity,’ the ministry said.

In 2020, Orban ruffled feathers when he posted a map of what nationalist term ‘greater Hungary’, showing the larger borders of the old Hungarian kingdom before the end of World War I.

The map of Great Hungary included large parts of modern Serbia, Romania and Slovakia, as well as the northern half of Croatia.

In response, Croatian President Zoran Milanovic urged school graduates not to publish any old maps that make Croatia look any bigger than it is now.

‘In our closets and archives there are numerous historical maps and maps that show our homeland much bigger than it is today… Don’t share them and put them on your profiles. They are not contemporary or achievable today, and, more importantly, [they] endlessly irritate our neighbours,’ Milanovic said, according to Balkan Insight.

In 2018, Orban unveiled a ‘history carpet’, showing a map of the Habsburg empire in the Justus Lipsius building, where EU leaders were gathered during a summit.

Hungary then defended the map by saying it was ‘a timeline of cultural, historical and scientific symbols or images of Hungary’, according to the EU Observer.

Hungary was forced to give up Slovakia and parts of Romania and Serbia at the end of the first World War under the Treaty of Trianon, leaving Hungary as a landlocked state.

The treaty also banned the existing navy and limited the army of Hungary, which had fought on the loosing side along with the other central powers, to 35,000 officers and men.

The loss of the territory has been a source of resentment within Hungary since the war.

MURFREESBORO, Tenn. – Murfreesboro Police Department (MPD) officers and Tennessee Highway Patrol (THP) troopers solved a kidnapping, robbery, and extortion case where a man was held hostage and tortured by two men after meeting a female for sex at a local hotel on Friday, Oct. 21. Harry Kiningham, 41, was arrested at the hotel on […]

FOX 32 Chicago Buffalo Grove, Illinois – The Village of Buffalo Grove hosted a press conference this afternoon where Police Chief Brian Budds shared known facts regarding the ongoing death investigation and Lake County Coroner Jennifer Banek shared new information regarding her office’s examination. “On behalf of the men and women of the Buffalo Grove […]