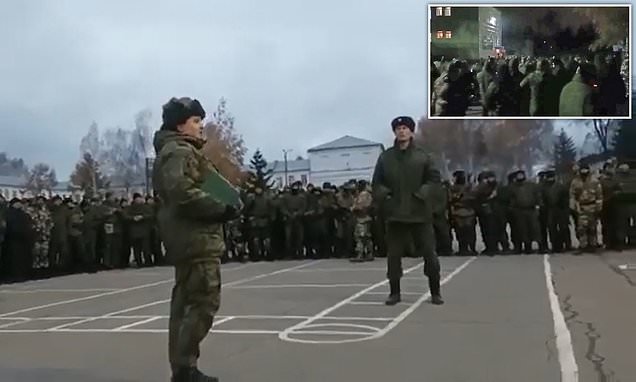 Russia is careering towards a bloody civil war and nationalist uprisings that could lead to the breakup of the country and the emergence of 30 to 40 new states, according to a Bashkir independence leader. Vladimir Putin’s ill-fated decision to invade Ukraine has poured fuel onto the flames of separatist causes throughout Russia, particularly in the country’s national republics. Russia’s population is made up of a complex tapestry of numerous nationalities and ethnic minorities – a legacy of its imperial past.

Currently there are almost 200 ethnic groups living within the borders of the existing Russian state, many of whom live in one of the 22 national republics that form part of the territorial framework of the country.

These republics on paper boast a degree of autonomy and have their own constitutions and legislatures. However, their leaders are appointed and closely controlled by the Kremlin and are expected to implement Moscow’s political agendas.

Growing anger at the Kremlin’s heavy handed assimilation policies, which seek to suppress and wipe out local cultures and national identities, has seen the emergence of a new generation of nationalist activists in the republics, who are increasingly calling for full independence from Russia.

One such person is Ruslan Gabbasov, the 43-year-old head of the Bashkir National Political Centre, or “Bashnatspolit”.

In August, his organisation declared it was starting a fight for a “Free Bashkortostan, and building a Bashkir political nation.”

Bashkortostan is located between the Volga River and the Ural Mountains and is home to roughly four million Bashkirs, who are descended from Kipchak Turks.

The nationalist leader told Express.co.uk that the Ukraine war offered a unique opportunity to realise dreams of independence, as no matter what the outcome of the conflict, Putin’s regime was doomed and Moscow’s iron grip over the regions would crumble.

He argued that Putin faces a no-win situation in Ukraine. Should the Russian leader lose the war, then his regime will collapse, plunging the country into chaos.

However, victory will not save him either. Ukrainians will never accept Russian rule and the Kremlin will have to pour money into “maintaining an enormous system of repression”.

Russia will also be faced with a massive bill for reconstruction, while its economy will still be constrained by Western sanctions.

All these financial costs will have to be borne by ordinary Russians, who “are already not well off”.

He said: “Russia will suffocate economically and will become a North Korea mark 2.

“The people will not be prepared to endure it and most likely there will be a big uprising, a big revolution.”

In a partial repeat of C20th history, revolution will be followed by civil war and an uprising by ethnic nationalists that could lead to the breakup of Russia into “30-40 states”.

To prepare for the future battles and political turmoil ahead, Mr Gabbasov and his supporters are forming their own army.

He explained: “If there is a revolution and Putin is defeated and removed, his supporters will not accept that . They will try to put him and his team back into power.

“So, there will be a civil war between his supporters and his opponents. Also conflicts between the different nationalities in Russia could happen. Therefore it is best now to have your own national guard.”

The Bashkir leader claimed the Ukraine war had galvanised nationalist leaders throughout Russia to form their own independence movements.

A League of Free Nations has been set up by activists to coordinate their actions and promote their agendas.

The institution includes Bashkirs, as well as Tartars, Buryats, Kolymyki, Chechens and Ingrians.

Moreover the Cossacks have joined, as have regional movements agitating for a Siberian Republic and a Ural Republic.

“So when I say 30-40 new states could emerge from Russia it is completely possible.”

The 43-year-old urged Western leaders to reach out to nationalist leaders and help control the breakup of Russia, so that viable democratic states emerge from the ruins.

He said: “The West cannot stop the breakup of the Russian state – it’s a consistent historical pattern.

“That historical pattern will repeat itself. Russia will fall apart.

“The West needs to pay attention to nationalist movements abroad who are fighting Putin.

“They should make contact with these movements, help them, democratise them, teach them how to govern – they should aim to create a new cadre of elites that are friendly towards them.”

Jon Stewart Admits Hunter Biden Being On Burisma Board ‘Is Corruption, Straight Up’ – Market Subset News

Comedian Jon Stewart admitted that Hunter Biden’s board position on the Ukranian gas company Burisma is “corruption, straight up.” His belated admission comes two years after the mainstream news media sought to bury the Hunter Biden laptop scandal in an effort to carry Joe Biden over the finish line during the 2020 presidential election. In […]

One British volunteer in Ukraine is reported dead and another as requiring brain surgery following a bloody clash with Russian tanks in Donbas. 38-year-old Simon Lingard and an unnamed comrade, both former British paratroopers, were injured during an engagement with a Russian tank column near Bakhmut, the centrepiece of Russian forces’ only major offensive operation at […]