Darrell Brooks, 40, received six consecutive life sentences without the possibility of parole on Wednesday for driving an SUV through a crowd at the Waukesha, Wisconsin, Christmas parade last year, killing six victims and injuring 61 others.

The aspiring rap artist was convicted on October 26 on six counts of first-degree intentional homicide and 61 counts of reckless endangerment, bond jumping, and battery for a total of 76 charges.

#Waukesha
Judge Dorow sentences Darrell Brooks to six consecutive life sentences to a round of applause from the courtroom pic.twitter.com/bZwdMtc5P8

When Waukesha County Judge Jennifer R. Dorow handed down each life sentence, reading the names of each victim, the courtroom applauded. He was also sentenced to 762 years in prison on each endangerment count.

Before being sentenced, Brooks was removed to another courtroom to participate via video because he had become disruptive during the hearing, the Associated Press (AP) reported.

“Frankly, Mr. Brooks, no one is safe from you,” she told him directly. “This community can only be safe if you are behind bars for the rest of your life. … You left a path of destruction, chaos, death, injury, and panic as you drove seven or so blocks through the Christmas parade.”

Brooks, who chose to represent himself in the trial, claimed that he had a history of mental health issues and experienced a difficult childhood while growing up. He then later apologized to the victims’ families.

Dorow dismissed Brooks’ claims that he was mentally ill, noting that four psychologists who had evaluated him earlier diagnosed him with an anti-social personality disorder but no mental illness.

“It is my opinion that mental health issues did not cause him to do what he did on Nov. 21, 2021, and frankly didn’t play a role,” Dorow said on Wednesday “It is very clear to me that he understands the difference between right and wrong and he simply chooses to ignore his conscience. He is fueled by anger and rage.” 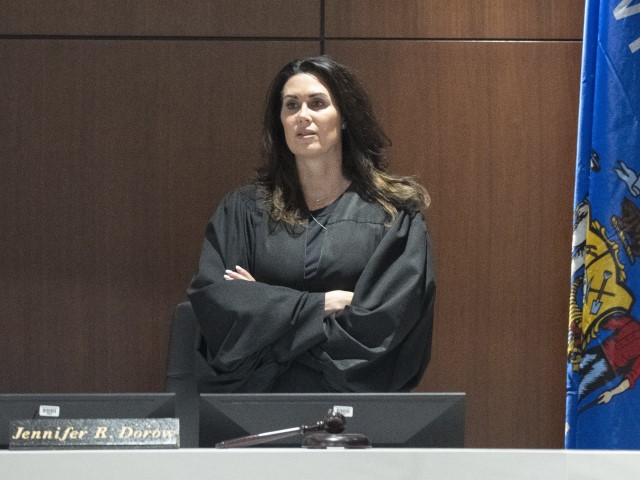 Judge Jennifer R. Dorow addresses defendant Darrell Brooks Jr. before he was removed from court after arguing with her and deputies Friday, Aug. 26, 2022, in Waukesha County Court in Waukesha, Wisconsin. (Mark Hoffman/Milwaukee Journal-Sentinel via AP, Pool)

On Tuesday, prosecutors asked the judge to give Brooks the maximum sentence for all the convictions he received last month.

You saw the videos. This wasn’t him plowing into one large group of fifty people at one time and hitting them. It was linear. He hit one, kept going. Hit two, kept going. Hit three, kept going. All the way down the street. That’s consecutive sentences, your honor. That’s intentional, willful, volitional conduct that warrants consecutive sentences stacked one on top of the other just as he stacked victims up as he drove down the road in complete disregard for any other person whatsoever.

Before he used an SUV to drive through Christmas parade-goers in downtown Waukesha — located about 16 miles west of Milwaukee — on November 21, 2022, Brooks had gotten into a fight with his ex-girlfriend.

He never explained his motive for his homicidal actions during the trial.

Brooks’ trial was full of disruptions due to his frequent outbursts, which forced Dorow to remove him from the courtroom multiple times, where he would participate via video.

During a pre-trial hearing in August, Brooks was removed from the court after launching a verbal tirade toward Dorow, Breitbart News reported.

Mass murderer Darrell Brooks, who killed six people and injured dozens more when he drove through a Waukesha Christmas parade in 2021, was escorted out of court today by Sheriffs Deputies after an outburst. Brooks has been in the courtroom several days this week. pic.twitter.com/Yafjh5THUU

Then in October, before the prosecution team was about to read Brooks’ lengthy criminal history, he slammed his hands on the table in front of him and started to stare down Dorow in a menacing manner. The judge paused the trial due to his behavior.

I need to take a break. This man right now is having a stare-down with me. It’s very disrespectful. He pounded his fist. Frankly, it makes me scared,” Dorow told the court at the time.

Brooks slams his fist and stares down Judge Dorow, prompting her to call a break citing she is now scared of Brooks. pic.twitter.com/K4nrP3VfkD

The victims who were killed by Brooks in the massacre last year include Jackson Sparks, 8; Jane Kulich, 51; Tamara Durand, 52; Lee Owen, 71; Virginia Sorenson, 79; and Wilhelm Hospel, 81.

Wisconsin does not have the death penalty.