A Democrat-nominated judge has unveiled a decision ordering the border agency to stop using the Title 42 anti-disease barrier to exclude wage-cutting economic migrants from the United States.

The Title 42 anti-disease rule was established by former President Donald Trump and is the only effective legal barrier to stop millions of poor migrants from gambling their lives and savings to get jobs and homes in the United States.

Once migrants trek to the border, they are allowed to enter a tangled, complex immigration system that prevents their deportation for several years. But President Joe Biden’s deputies also release nearly all of the migrants, despite laws requiring the detention of asylum seekers.

That catch-and-release policy gives migrants plenty of time to pay off their smuggling debts, summon more home-country migrants, have U.S.-citizen children, and hide from the nation’s deportation agency.

The decision, unveiled a week after Election Day, immediately bars the Department of Homeland Security from enforcing the Title 42 anti-disease barrier at the border. The decision was approved by Emmet Sullivan, a far-left, Democrat-nominated judge overseeing an ACLU lawsuit.

“This decision — which takes effect immediately — knocks down one of the last remaining barriers to complete anarchy at the border,” said a statement from the Federation for American Immigration Reform. “If the Biden administration does not appeal, it will be one of the most egregious derelictions of duty when it comes to border security, once again proving that the crisis is deliberate and something they never intend to fix.”

The White House — and Republican governor of Texas, Greg Abbott — may appeal the judgment to other judges and to Justice John Roberts on the Supreme Court.

The nation’s pro-migration border chief, Alejandro Mayorkas, has been reducing the use of the Title 42 barrier since he took over the nation’s borders in February 2021. In October, for example. 277,500 people arrived at the border, but Mayorkas excluded just one-third — 81,500 — under Title 42. 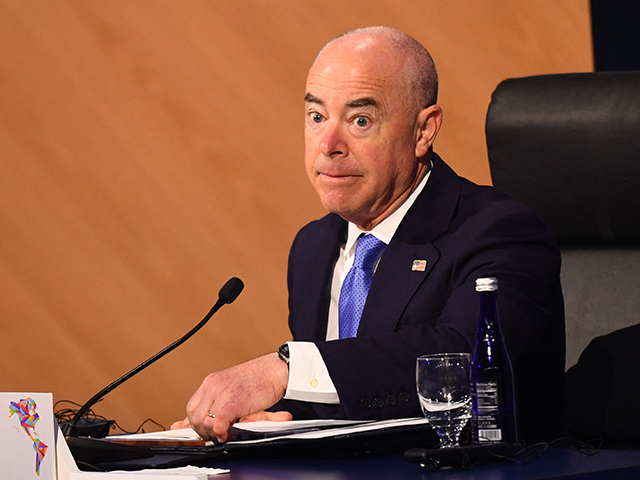 In the 12 months before October 2022, almost 2.7 million migrants were registered while crossing the border.

Mayorkas declined to use the Title 42 legal barrier to exclude 1.66 million of those migrants from the United States.

The elite-backed, multi-decade inflow of illegal migrants and legal migrants has imposed a huge cost on Americans by pressuring down their wages. It has also boosted rents and housing prices, and it has reduced ordinary, native-born Americans’ clout in local and national elections.

The inflow has also pushed many native-born Americans out of careers in a wide variety of fields and spiked the number of “Deaths of Despair.”

The border welcome offered by Mayorkas and Biden has also killed thousands of job-seeking migrants, both at the U.S.-Mexico border, and further south, especially in the Panamanian jungle.

Hamleisy and Hamleisky Ortega, of Venezuela, traveling hand-in-hand through the Darién Gap, trying to make it to the United States.

They brought with them their pet turtle, called Tuga. pic.twitter.com/7n39INmkpm

However, Democrats are working with the GOP’s business wing to pressure the populist wing of the GOP into approving another citizenship-diluting amnesty and more wage-cutting migration.

Government officials try to grow the economy by raising exports, productivity, and the birth rate. Those strategies are difficult and slow, and so officials also try to expand the economy by extracting millions of migrants from poor countries to serve as extra workers, consumers, and renters.

This policy floods the labor market and so it shifts vast wealth from ordinary people to investors, billionaires, and Wall Street. It also makes it difficult for ordinary Americans to advance in their careers, get married, raise families, buy homes, or gain wealth.

Extraction migration slows innovation and shrinks Americans’ productivity. This happens because migration allows employers to boost stock prices by using stoop labor and disposable workers instead of the skilled American professionals and productivity-boosting technology that earlier allowed Americans and their communities to earn more money.

This migration policy also reduces exports because it minimizes shareholder pressure on C-suite executives to take a career risk by trying to grow exports to poor countries.

Migration undermines employees’ workplace rights, and it widens the regional economic gaps between the Democrats’ cheap-labor coastal states and the Republicans’ heartland and southern states.

An economy fueled by extraction migration also drains Americans’ political clout over elites and it alienates young people. It radicalizes Americans’ democratic civic culture because it gives a moral excuse and an economic tool to the wealthy elites and progressives who want to divorce outspoken Americans — and especially poor Americans at the bottom of society, such as drug addicts.

This diversify-and-rule investor strategy is enthusiastically pushed by progressives. They wish to transform the U.S. from a society governed by European-origin civic culture into an economic empire of jealous identity groups overseen by progressive hall monitors. “We’re trying to become the first multiracial, multi-ethnic superpower in the world,” Rep. Rohit Khanna (D-CA) told the New York Times in March 2022. “It will be an extraordinary achievement … We will ultimately triumph,” he boasted.

But the progressives’ colonialism-like economic strategy kills many migrants. It exploits the poverty of migrants and splits foreign families as it extracts human resources from poor home countries to serve wealthy U.S. investors.

Progressives hide this extraction migration economic policy behind a wide variety of noble-sounding explanations and theatrical border security programs. Progressives claim the U.S. is a “Nation of Immigrants,” that economic migrants are political victims, that migration helps migrants more than Americans, and that the state must renew itself by replacing populations.

Many polls show the public wants to welcome some immigration, but the polls also show deep and broad public opposition to labor migration and to the inflow of temporary contract workers into the jobs needed by the families of blue-collar and white-collar Americans.

This “Third Rail” opposition is growing, anti-establishment, multiracial, cross-sex, non-racist, class-based, bipartisan, rational, persistent, and recognizes the solidarity that American citizens owe to one another.

A video image displaying the US Capitol grounds being breached during a hearing of the Select Committee to Investigate the January 6th Attack on the US Capitol in Washington, D.C., on June 9. Photographer: Mandel Ngan/AFP/Bloomberg The January 6 Committee holds its ninth public hearing on the attack of the U.S. […]

Chesterfield County, VA – On 7/31/2022 around 11:23 p.m. a blue Toyota sedan with a sunroof entered the drive-thru of Cook Out. Witnesses reported seeing the following occupants inside the vehicle: Driver: Mid to late 20’s Hispanic male, long black curly hair in ponytail with a fade underneath and a dark beard Front Passenger: Hispanic […]