ESPN host Stephen A. Smith drew an analogy to the killing of George Floyd when discussing Kyrie Irving’s suspension on Friday, saying that the league’s punishment of the Nets star was like having a “knee on his neck.”

George Floyd died in the summer of 2020 after an altercation with Minneapolis police officers in which one of those officers, Derek Chauvin, put pressure on Floyd by placing his knee on the back of Floyd’s neck. 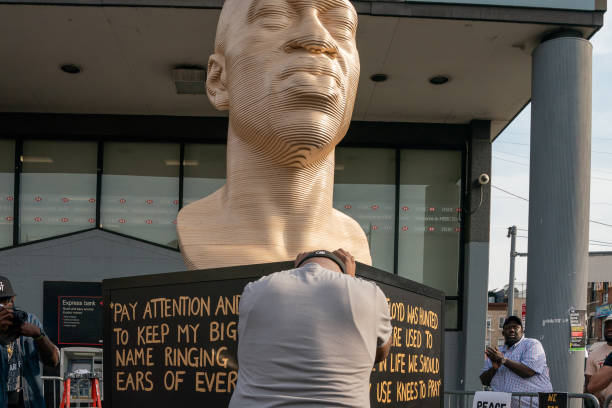 Terrance Floyd weeps during the unveiling of a statute dedicated to his brother George Floyd at Flatbush Junction on June 19, 2021, in the Brooklyn borough of New York City. The unveiling of the statue happened just days after Juneteenth was declared a federal holiday. (David Dee Delgado/Getty Images)

Late last month, Irving posted a link to a movie based on a book that contained “antisemitic disinformation.” As a result, Irving came under intense scrutiny and was suspended by the league for a minimum of five games for failing to “unequivocally” say he held no antisemitic beliefs.

On Friday’s edition of First Take, Smith took exception to what he believes is a severe punishment by drawing an analogy to the killing of George Floyd.

“You are emasculating this man,” Smith said. “And when you emasculate a black man, I’m going to say something about that. It is uncalled for; it is unnecessary. Black folks, we don’t get enough credit for this; we forgive people all the time. How many things have been accorded against us? How many things have been spoken about us inaccurately? How many times throughout history have we been demonized? And marginalized? And insulted? We’ve shown forgiveness; we’ve shown compassion. 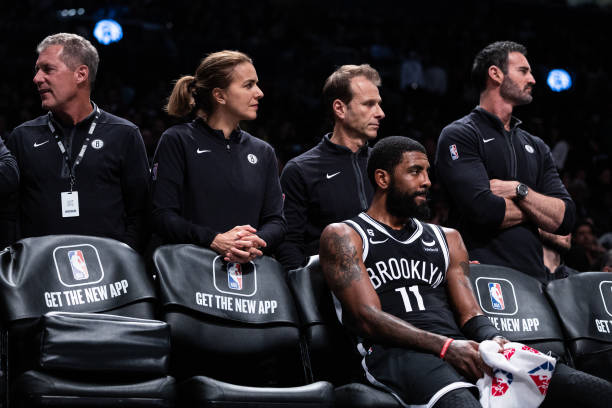 Kyrie Irving #11 of the Brooklyn Nets looks on from the bench during the fourth quarter of the game against the Chicago Bulls at Barclays Center on November 01, 2022, in New York City(Dustin Satloff/Getty Images)

“We got riots that took place in the streets a couple of years ago,” Smith continued. “And I told everyone back then; I said ‘when George Floyd had that knee on his neck, what people didn’t get,’ outside of the black community, is that black folks were going off because we were saying from a figurative perspective, from a metaphorical perspective, we always feel like we got a knee on our neck. And that’s where the frustration and the fulminant of vitriol and hostility and, dare I say; violence came shining through.”

Irving apologized for posting the link to the film on Instagram.

“To all the Jewish families and communities that are hurt and affected from my post, I am deeply sorry to have caused you pain, and I apologize.”

It’s unclear when Irving will return to action.

The illegal alien accused of killing 24-year-old Weld County, Colorado, Sheriff’s Deputy Alexis Hein-Nutz — just one week before her 25th birthday — had a criminal history, but federal agents failed to deport him. As Breitbart News reported, 36-year-old illegal alien Norberto Garcia-Gonzales has been arrested and charged with killing Hein-Nutz in a hit-and-run drunk driving […]

A non-governmental organization (NGO), with financial links to billionaire George Soros, has won a $41 million federal contract from President Joe Biden’s Department of Justice (DOJ) to help illegal aliens evade deportation from the United States. The Acacia Center for Justice, an NGO with financial ties to the Soros-linked Vera Institute of Justice, scored a […]