Arizona’s most populous county, Maricopa, released results Saturday from 85,656 tabulated ballots that broke slightly for Republicans in the gubernatorial and attorney general races and against GOP candidates in the U.S. Senate and secretary of state races.

A breakdown of the votes from KNXV ABC 15 Data Analyst Garret Archer is listed below as Maricopa County estimates its county-wide tabulation is now 87.6 percent complete.

Archer later added that this only included a portion of 114,000 “late early drop-offs” that are expected to break for Republican gubernaotrial nominee Kari Lake and other candidates.

👋. Being that guy again.

Today’s 85K batch only included a portion of this 114K. The reason you haven’t seen any calls, is b/c The agencies know this is coming.

It’s not a question that Rs will win the next batches. Only a question of by how much. https://t.co/ZUnoNIHwb9

“It’s not a question that Rs will win the next batches. Only a question of by how much,” he added.

The statewide results of the four top statewide races were as follows of 9:21 a.m. Eastern Saturday, with an estimated 88 percent of the vote reported, per the New York Times:

As of 9:00 a.m. Eastern Saturday, all counties had reported at least 95 percent of their respective results except for the following, per the Times: 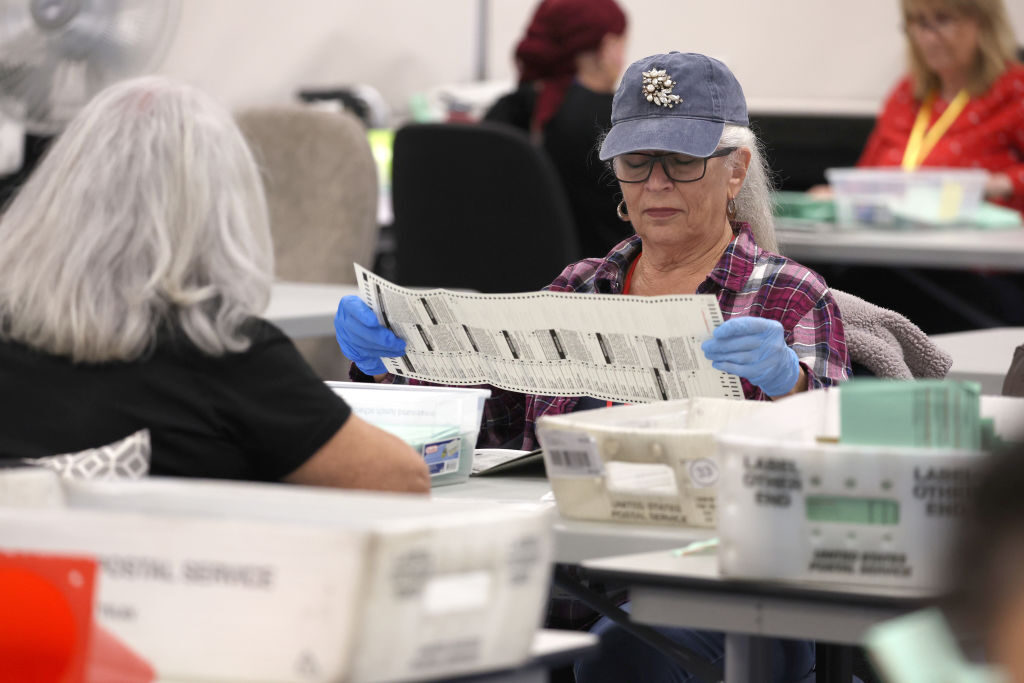 Election workers open mail in ballots at the Maricopa County Tabulation and Election Center on November 11, 2022 in Phoenix, Arizona. Ballots continue to be counted in Maricopa County three days after voters went to the polls for the midterm election in Arizona. (Photo by Justin Sullivan/Getty Images)

After the results of Friday night’s batch, which favored Democrats, were reported, the Associated Press projected Kelly as the winner of the U.S. Senate race and Fontes as the next secretary of state.

“For my people who knocked on doors in 115 degree heat, and for the million+ Arizonans who put their faith in me, we are going to make sure that every legal vote is counted,” tweeted Masters on Saturday.

“If, at the end, Senator Kelly has more of them than I do, then I will congratulate him on a hard-fought victory. But voters decide, not the media; let’s count the votes,” he added.

At a press conference Saturday, Maricopa County Board of Supervisors Chairman Bill Gates said he was “not sure on the timetable” for when results will be reported Sunday.

Advertisement OPINION: This article may contain commentary which reflects the author’s opinion. President Joe Bien’s administration is preparing to go head to head with China and Russia in its new foreign policy strategy. “In the early years of this decisive decade, the terms of geopolitical competition will be set while the window of opportunity to […]

Former President Donald Trump is making a “major announcement” at his Florida home, Mar-a-Lago, on Tuesday, November 15. Trump teased this announcement on Monday, November 7, at the final “Save America” rally of the 2022 midterm cycle in Ohio. Since then, most observers have predicted that his remarks will concern his plans for the 2024 […]

The Polish government today announced the construction of a 130-mile razor-wire fence along the border with Russia’s exclave of Kaliningrad to prevent illegal crossings. Defence Minister Mariusz Blaszczak announced the decision amid concerns in Warsaw that Russia plans to orchestrate an influx of migrants. ‘The airport in Kaliningrad is now accepting flights from the […]