WASHINGTON, District of Columbia — Sen. Mike Lee (R-UT) said that the First Amendment right to freely associate was the most violated right by the government during coronavirus, granting it the ability to violate “all of our other rights.”

“Freedom of association … is about as much at the headwaters of all of our other rights — certainly all of our other first amendment rights, and many of the other rights protected in the Bill of Rights as you can think of,” he said in an address to the Federalist Society’s 2022 National Lawyer’s Convention. “So much of what we do as groups — as entities — we do together, relates to other rights, and protects us so that we can remind each other that we are not alone.”

Lee told the room filled with mostly conservative lawyers and law students that the freedom to associate aids other rights, and gives the American people the power to more effectively stand up to the government and exact change.

Association, “for nearly all of us who are religious,” is “essential” for the actual practice of that religion.

But during the pandemic, governmental entities across the country targeted this right specifically, granting them access to diminishing other rights association protects.

“All of a sudden, where did they crack down most? On our ability to assemble,” Lee asserted. “This, in turn, led to people no longer being able, or feeling confident being able, to stand up to government, to question government edicts.”

The Utah Republican said the abuse has continued, and “gotten really ugly in the last year or two.”

Lee referred to multiple instances of government abuse of the right, including the Department of Justice issuing a subpoena against Eagle Forum regarding an Alabama law dealing with the medical gender transitions of children.

While Justice was seeking a disclosure of communications associated with the legislation, the judge ruling against Attorney General Merrick Garland’s department called the subpoena “abusive discovery’ and “lawfare at its worst.” 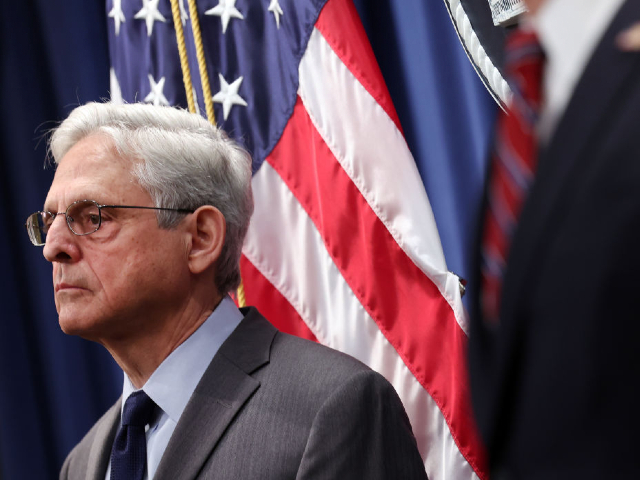 WASHINGTON, DC – OCTOBER 24: U.S. Attorney General Merrick Garland attends a press conference at the U.S. Department of Justice on on October 24, 2022 in Washington, DC. The Justice Department announced it has charged 13 individuals, including members of the Chinese intelligence and their agents, for alleged efforts to unlawfully exert influence in the United States for the benefit of the government of China. (Photo by Kevin Dietsch/Getty Images)

It was a “clear and present threat to the First Amendment rights of the Eagle Forum,” Lee said.

In essence, the Justice Department bullies the Biden administration’s political enemies, according to the Senator.

“Look at what happened on September 23, where you had FBI agents — FBI agents who weren’t just wearing a suits, they were armed with long arms, ballistic shields, and a battering ram,” Lee said, describing intimidation tactics used by the federal government on pro-life activists. “They forced a man named Mark Houck from his Pennsylvania home, they did so at gunpoint, in front of his wife, and in front of their seven children.”

“Other peaceful pro-life protesters have received the same treatment over the past few months,” he continued. “This is how they deal with those who lawfully and peacefully exercise their free speech rights and their associational rights. They do so with an overwhelming show of force.”

Earlier in the address, Lee reminded the audience that “Government is force, and like fire, it’s dangerous and it has to be controlled — should never be trusted.”

“It’s disgraceful,” he said. “This is the sort of force we ordinarily reserved for really hardened criminals who are bent on imminent lawless conduct and violence.”

Lee tied these abuses of government into the need for adversarial procedure in the American justice system, and the obligation of attorneys  to uphold it as the safeguard to liberty.

A recent court filing states that NFL legend and Hall of Famer Brett Favre, consistently sought funding for a new volleyball stadium at Southern Miss even after he was told it could be illegal. A text sent to Favre on July 28, 2019, by former Mississippi Governor Phil Bryant, said that the founder of a […]

⚡️ VIDEO: With 100 per cent of protocols processed, 93.11 per cent of votes cast for Zaporozhye region to join Russia – CEC