Since releasing Codespaces to customers of GitHub’s Team and Enterprise plans last year, hundreds of thousands of developers have left their local development environments for the speed, agility, security, and collaboration that cloud based development has to offer. Our customers have all felt a similar pain when trying to contribute to a new inner or open source project, or when they’re learning a new language, and that’s the laborious pain of setting up and maintaining dev environments. But being able to start coding immediately without worrying about dev environment setup isn’t something that resonated only inside of organizations; it has also resonated with individual developers, maintainers of open source projects, and learners of all kinds.

With that in mind, over the course of this week, Codespaces is becoming generally available for all GitHub Free and Pro plan users. We’re also excited to provide every developer with up to 60 hours (90 hours for Pro plan users) per month of free Codespaces usage so they can start building in seconds and join us in our mission to accelerate human progress through developer collaboration.

In addition to Codespaces becoming generally available, our team has been working hard to create many new and improved Codespaces experiences. Here’s details on all the updates we showed this week at Universe 2022.

Developers have strong preferences and widely varying opinions about their chosen tooling. As developers ourselves, we understand and strive to support a wide array of tooling options and personalizations to suit virtually all developer preferences. So, this week we announced Codespaces public beta support for JetBrains IDEs, in addition to our existing support for VS Code in the browser or on the desktop, VIM, and emacs. Now, developers can code in the cloud using the JetBrains IDEs they prefer, like IntelliJ or PyCharm. To connect to your codespace, download JetBrains Gateway and install the Codespaces plugin from the JetBrains Marketplace.

Additionally, GPU-powered Codespaces are now available in limited beta. Having access to a GPU from within a codespace allows developers to run complex ML models much more quickly, and the combination of GPUs, along with support for Jupyter notebooks and Codespaces’ standardized, repeatable environments make collaboration on data science and ML workloads much easier since developers don’t have to struggle with complicated setup and local installations, much less running on underpowered desktop workstations. Learn more in our documentation, and to request access to the GPU machine type, or any additional machine type, please complete the sign up form and we’ll respond as soon as possible.

We’ve added experiences to make starting new projects from Codespaces with the most common app frameworks easier using repository templates. This capability allows users to single-click into a development environment and get straight to coding—no configuration required. From there, users can write, test, debug, and run their application, accessing it from automatically forwarded port(s). For more advanced scenarios, configuring a development container enables the codespace to install specific dependencies, run scripts, pre-open files, run required services or processes, and render app output, resulting in an unprecedented new project experience for developers.

You can learn how to create repository templates and development containers to make your app framework easier for new users to try now. 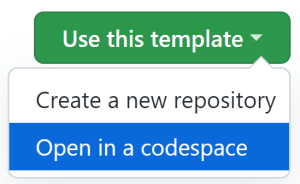 For users new to programming, or developers wanting to take their skill to the next level, you can now try LinkedIn Learning’s 50+ Codespaces-enabled courses that cover six of the most popular programming languages, as well as topics like web development, data science, AI, and ML. These courses will be unlocked on LinkedIn Learning for free through February 2023.

For Teams and Enterprises rolling out and managing codespaces at scale, we’ve added support for organization level APIs and administrative policies that enable scaling up with confidence. The organization level APIs, which are generally available, offer a wide range of management operations to enable integrating Codespaces into existing workflows and systems. Additionally, administrators can apply cost control, compliance, and security policies for organization-owned codespaces to facilitate smooth rolls outs across large teams.

Codespaces prebuilds have been generally available since June and enable consistently fast start times for codespaces created against large repositories and complex applications. Prebuilt codespaces is such a marked improvement in these scenarios that it was listed as one of the cornerstone capabilities that enabled GitHub.com’s own developers to bring dev environment bootstrapping time down from 45 minutes to 10 seconds.

We believe that all developers should be able to contribute to open source quickly and easily, and that Codespaces, with prebuilds, is the best way to achieve that. As such, we’re inviting maintainers of open source projects in free organizations to apply for prebuild storage grants that would enable many projects to use prebuilds free of charge.

Over the past year, we’ve celebrated in the success that organizations like Duolingo and Vanta have enabled by using Codespaces, and with the general availability and included free usage, we can’t wait to see what it can do for every GitHub user and the open source community at large.

Lastly, I’d like to personally thank the Codespaces team! Our group of engineers, product managers, designers, researchers, marketers, business folks, and other partners from across the company have collectively brought to life the vision of what the future of software development will look like. Their obsession with making developers’ lives better has only been matched by their drive and hard work. Thank you, team, for effectively eliminating yak shaving for so many in our industry. Cheers! 🍻

Now, it’s your turn. Go ahead, try Codespaces today, and let us know what you think. 😀

An enterprise account is coming to all Enterprise customers – Technology Subset

GitHub is the complete, integrated platform to give developers everything they need to be creative, to be happier, and to build their best. From an individual developer to an IT leader managing the account, GitHub Enterprise is the place for businesses to bring the best development tools to their developers. That is why GitHub Enterprise […]

We’re excited to announce a public preview of GitHub Actions Importer, which helps you forecast, plan, and facilitate migrations from your current CI/CD tool to GitHub Actions. Doing individual migrations is relatively easy in isolation. However, for companies that have a large and established CI/CD footprint, having tooling available to assist with migrations is key […]