A measure to enshrine abortion as a “fundamental right” in the state constitution of Michigan has been projected to become law following Tuesday’s vote.

The state ballot initiative Proposal 3, which would establish a “fundamental right to reproductive freedom,” including access to abortion, has been projected to pass by the Associated Press, with 56 per cent of voters backing the move to amend the state constitution compared to 44 per cent against as 78 per cent of votes were counted.

The proposal would amend the state constitution to state that “every individual has a fundamental right to reproductive freedom, which entails the right to make and effectuate decisions about all matters relating to pregnancy, including but not limited to prenatal care, childbirth, postpartum care, contraception, sterilization, abortion care, miscarriage management, and infertility care.”

Celebrating the result, Darci McConnell of Reproductive Freedom for All, the group behind the proposal, said per the Detroit Free Press: “Today, the people of Michigan voted to restore the reproductive rights they’ve had for 50 years. Proposal 3’s passage marks an historic victory for abortion access in our state and in our country — and Michigan has paved the way for future efforts to restore the rights and protections of Roe v. Wade nationwide.”

According to exit polls conducted by NBC News, abortion was a critical issue in Michigan’s gubernatorial race on Tuesday, with 45 per cent of voters saying that abortion was determinative in which way they voted. For those who abortion was the top issue, 78 per cent said that they agreed with Democrat Governor Gretchen Whitmer’s position of allowing abortion to stay legal under almost all scenarios.

Whitmer, who has been projected to have won her reelection race against Republican challenger Tudor Dixon, refused to back any restrictions on abortions during the debates in October.

“When the Supreme Court overturned Roe v. Wade, it took away rights that we’ve had for 49 years. Rights that I’ve had my whole life have now been ripped away from women and girls in this country,” Whitmer said during the debate. “Michigan could revert to a 1931 law that makes it a felony, with no exceptions for rape or incest, criminalizing doctors and nurses.”

Criticising the governor’s position, Dixon said at the time: “Gretchen supports abortion up until the moment of birth, an extreme policy found only in China and North Korea. Her radical position is dangerous for Michigan.” 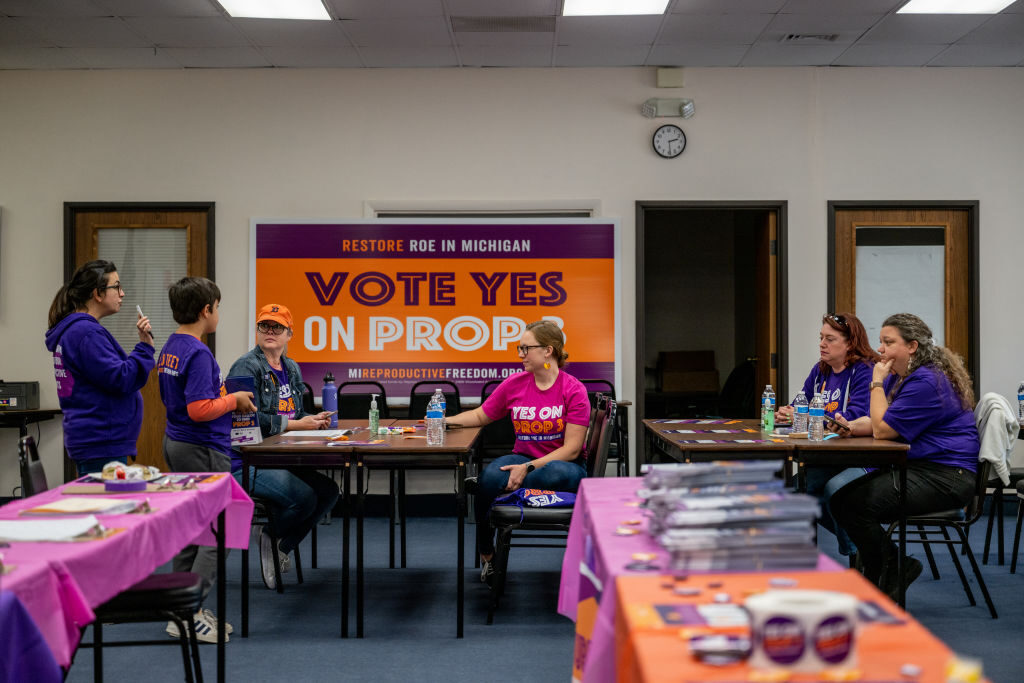 Proposal 3 volunteers conduct a meeting at the RFFA Dearborn site before going out to canvass on November 06, 2022 in Dearborn, Michigan. (Brandon Bell/Getty)

While Whitmer has not backed any time limits on abortion, the proposal would empower legislators to “regulate the provision of abortion care after fetal viability, provided that in no circumstance shall the state prohibit an abortion that, in the professional judgment of an attending health care professional, is medically indicated to protect the life or physical or mental health of the pregnant individual.”

With the projected passage of the pro-abortion proposal, Michigan will join Vermont in enshrining a right to abortion at the local level after the overturning of Roe V. Wade by the Supreme Court kicked decisions on abortion from the federal government back to the states.

Advertisement OPINION: This article may contain commentary which reflects the author’s opinion. A Georgians continue to vote early in the U.S. Senate runoff election, one of the candidates — incumbent Democratic Sen. Raphael Warnock — is in hot water again. Fox News Digital reported Wednesday that Warnock worked in his younger days as an assistant […]