Qatar World Cup ambassador Khalid Salman got his own interview shut down Tuesday after saying homosexuality is “damage in the mind,” warning a German broadcaster gay soccer fans have to “accept our rules” if traveling to the repressive Middle East monarchy.

Qatar will be hosting the 2022 FIFA World Cup starting on November 20, one of the planet’s most prestigious sporting events. Qatar is a small Mideastern state with a highly inhospitable climate for playing soccer – the tournament was moved out of the summer months to protect players from playing in dangerous desert conditions – that boasts a deplorable human rights record. The success of its bid to host the tournament baffled and outraged many international observers, particularly since the competing bid came from the United States, which has successfully hosted the World Cup in the past.

In 2020, the Department of Justice accused FIFA of accepting bribes from Qatar and another dictatorship, Russia, for World Cup hosting duties. Qatari officials vehemently denied the allegations.

With the World Cup close to launching, concerns about the nature of Qatar as a government have risen to the forefront. Human rights activists fear that Qatari police will abuse foreign soccer fans in the country to attend the event. Others object to the widely documented abuses against foreign laborers used to build the World Cup’s facilities, which many say are tantamount to slavery. 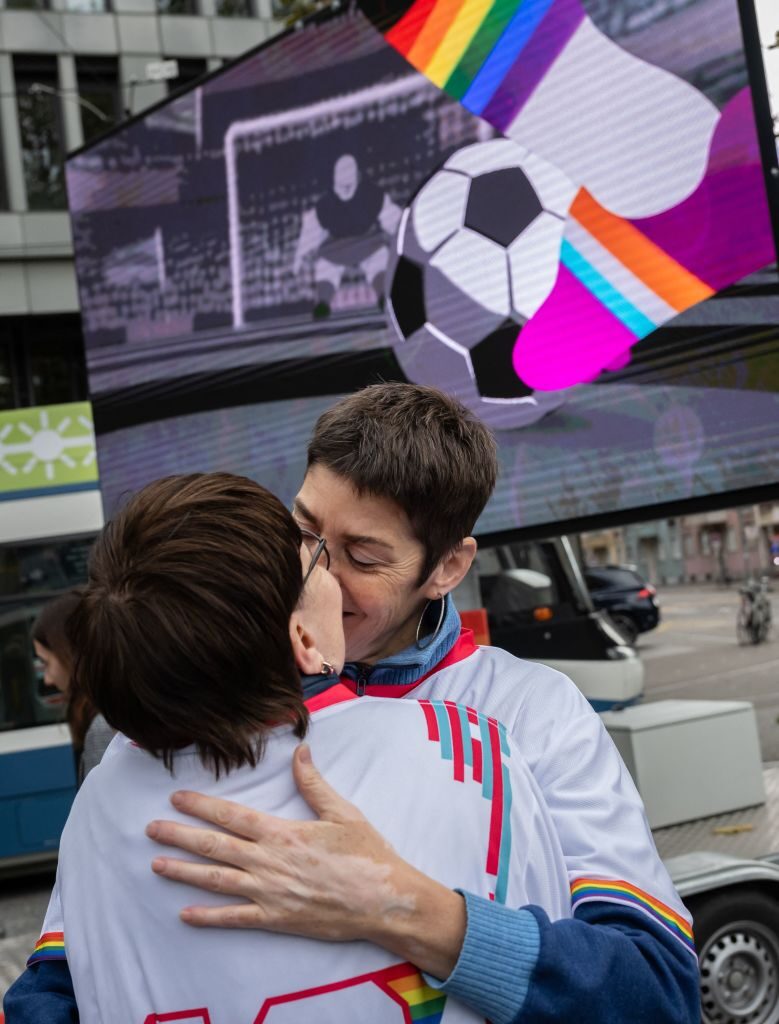 Two women kiss next to a board during a symbolic action by LGBT+ associations in front of the FIFA museum in Zurich on November 8, 2022, to call FIFA to defend the rights of the LGBT+ community ahead of the Qatar 2022 FIFA World Cup football tournament that will start on November 20. (FABRICE COFFRINI/AFP via Getty Images)

Khalid Salman, a former professional soccer player, is serving as Qatar’s ambassador to the cup. According to the U.K. Guardian newspaper, FIFA describes country ambassadors as tasked with “harnessing the power of football [soccer] to create positive social change in Qatar, across the region and around the globe.”

In an interview with the German broadcaster ZDF, he was asked about concerns that Qatar may imprison or otherwise abuse gay soccer fans. Homosexuality is illegal in Qatar and years of human rights investigations have unveiled that the state uses “catfishing” operations to imprison gay people by using policemen posting as potential romantic partners on dating apps. An investigation published by the British newspaper i last week told the story of a man identified by the pseudonym “Ali” who accused Qatari police of gang-raping him after he attempted to meet another man through a dating app.

“They have to accept our rules here. [Homosexuality] is haram. You know what haram means?“ Salman asked the interviewer. Haram is an Arabic word meaning “forbidden” and describes behaviors outlawed under the sharia, or Islamic law. Qatar is an Islamist state.

“I am not a strict Muslim,” he continued, “but why is it haram? Because it is damage in the mind.”

In a video excerpt published by ZDF, which will air the full interview on Tuesday, hands can be seen frantically waving in front of the camera as Salman makes his declaration, abruptly ending the interview.

The comments elevate concerns already circulating that the physical integrity of fans at the game, especially those who are LGBT or Qatari officials may identify as such, is not guaranteed. FIFA itself has enthusiastically denied that any such concerns exist. In June, which corporations in the West celebrate as LGBT “pride” months, FIFA published a statement proclaiming that the Qatar World Cup would be “a celebration of … diversity.”

“Every year, Pride Month during June is a celebration for the LGBTQIA+ community, as well as an opportunity to peacefully protest and raise political awareness of current issues,” a statement from FIFA read. “This year, FIFA will deliver the greatest celebration of football the world has ever seen – and the first global gathering of sports fans since the pandemic.”

The World Cup would be, it continued, “a celebration of unity and diversity – a joining of people from all walks of life – regardless of race, ethnicity, religion, age, disability, sex characteristics, sexual orientation, gender identity and expression.

“Everybody will be welcome,” FIFA promised.

“Everyone is welcome [at the World Cup] regardless of origin, background, religion, gender, sexual orientation or nationality,” Gianni Infantino, the president of FIFA, said last week, an apparent response to concerns about abuses of women or LGBT people at the tournament.

Qatari officials have rejected all human rights concerns and complaints, going as far as to brand them racist.

“Since we won the honor of hosting the World Cup, Qatar has been subjected to an unprecedented campaign that no host country has ever faced,” the emir of Qatar, Sheikh Tamim bin Hamad al-Thani, declared in late October. 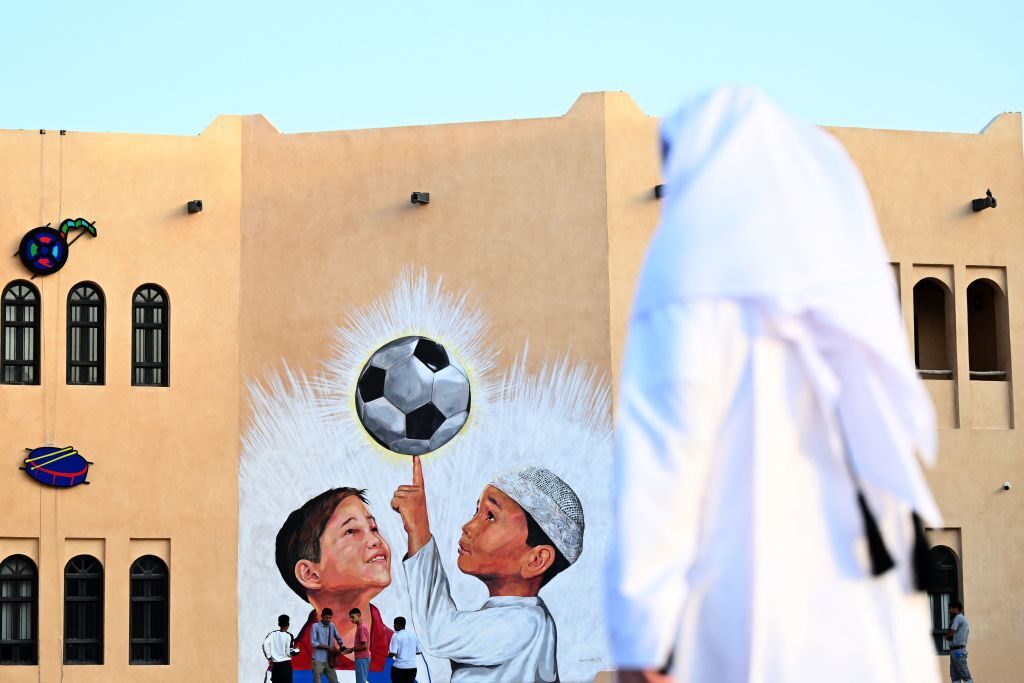 People pass a mural in Doha on November 8, 2022, ahead of the Qatar 2022 FIFA World Cup football tournament. (GABRIEL BOUYS/AFP via Getty)

Sheikh Tamim insisted that human rights concerns were “fabrications and double standards that were so ferocious that it has unfortunately prompted many people to question the real reasons and motives behind the campaign.”

“It is ironic when this tone is struck in countries in Europe that call themselves liberal democracies. It honestly sounds very arrogant and very racist,” he told the German newspaper Frankfurter Allgemeine Zeitung this week.

Ethically challenged former FIFA President Sepp Blatter, who ran the organization when Qatar won hosting rights for 2022, said publicly this week that allowing the country to host was a mistake, but claimed the problem with the situation was that Qatar was simply too small a country to successfully run the event.

“Football and the World Cup are too big for that,” he said in an interview on Tuesday, taking “responsibility” for the decision and stating it would have been “a gesture of peace” for America to host instead of Qatar, following Russia’s 2018 hosting.

Blatter was reportedly cleared of ethics wrongdoing in fraud case in June. In this week’s interview, he claimed that the investigation into his time as president occurred because “the Americans … were angry because the World Cup tournament had not gone to them but to Qatar.”

Spread the love Several hundred were seen running at Bab Al-Hawa border crossing in Idlib towards Turkey on Monday. The “peace caravan,” as participants call it, attempts to cross Turkey toward Europe, however, once they reached the borders, militants of extremist group Hayat Tahrir al-Sham (HTS) reportedly attacked the convoy, and arrested several people. During […]