New Hampshire Republican Karoline Leavitt is vying to become the youngest woman in history to be elected to Congress and spoke during an appearance on Breitbart News Saturday about how her age was a driving factor in her decision to run for office.

Leavitt, who turned 25 in August, said she saw a need for conservative voices from her generation “to break through the noise” and reach the youngest bloc of voters, who she said are “being brainwashed by the left every single day.”

“That’s one of the reasons I felt compelled to run in the first place, is reaching out to my generation of voters, Gen Z, millennial Americans being brainwashed by the left every single day through the media, Hollywood, big tech, you name it,” Leavitt said. “We desperately need young, energetic, conservative voices on our side of the aisle to break through the noise and change the direction of the country.”

Leavitt added, “This generation is the most influential voting bloc in America today, so we have a lot of work to do if we want to win elections and save our country, and that’s exactly what I’m doing here in New Hampshire and we are going to win on Tuesday.”

Leavitt, a former assistant press secretary in the Trump White House, is running in a competitive congressional battle against incumbent Rep. Chris Pappas (D-NH) in New Hampshire’s First District. While Pappas has held a slim single-digit lead in the race for several weeks, the most recent public poll, taken by Saint Anselm College, found Leavitt up six points over her Democrat opponent.

Leavitt pointed to Pappas’s voting record as his greatest weakness, calling it “atrocious.” Pappas, she said, has “created and enabled” the various crises facing the country, including four-decade-high inflation, which polls indicate is overwhelmingly Americans’ top concern. 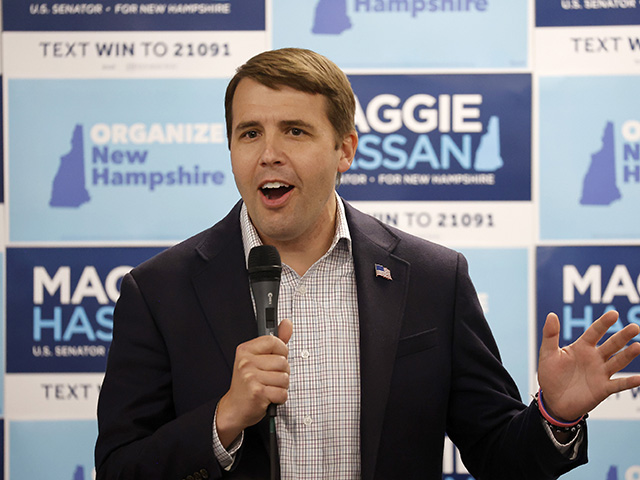 “He walks, talks, acts like he’s a moderate Democrat and presents himself as a bipartisan problem solver — that’s been his slogan — and I hit him in our debate the other night. ‘You’re not a problem solver. You’re a problem creator, and you’re one of the most partisan members of the U.S. Congress,’” Leavitt said.

Pappas is running in a district that former President Donald Trump narrowly won in 2016 and narrowly lost in 2020, but the swing district Democrat has indeed not deviated once from the Democrat party this Congress. Pappas has voted in line with President Joe Biden’s agenda 100 percent of the time, according to a FiveThirtyEight analysis.

“When Chris Pappas has been tasked with voting for families like my own — less government, lower taxes — he’s chosen [House Speaker Nancy] Pelosi, more government, higher taxes every single vote over the past two years,” Leavitt said. “He voted to strip qualified immunity away from our law enforcement after promising them that he wouldn’t. They’re all backing me in this race now because he’s just pretty much broken every single promise he has ever made. Voters are fed up with it.”

Qatar showcased its Ras Abu Aboud stadium in Doha, also known as Stadium 974, a fully demountable venue ahead of World Cup games. The stadium was built using 974 recycled shipping containers as modular building blocks as part of a sustainable design concept. The number 974 is also the Qatar area code. Stadium 974 was […]

Spread the love Meghan Markle reportedly hired a fact checker for her own Spotify podcast series, Archetypes. The fact checker is U.S. writer Nicole Pasulka, whose views closely mirror Markle’s, according to a report by Daily Mail. “I write about criminal justice, activism, race, music, business, queer culture, and gender,” Pasulka explains on her website. “For my 2014 report […]

Democrat John Fetterman holds a five-point lead over Republican Dr. Mehmet Oz in Pennsylvania’s race for U.S. Senate, according to a poll. The CBS/YouGov released Wednesday shows that 47 percent of registered voters back Oz, a celebrity doctor, while 52 percent support Fetterman, the state’s lieutenant governor. Another one percent remain undecided. The candidates evenly […]