Sen. Josh Hawley (R-MO) said that he would not support Mitch McConnell for Senate Majority Leader if the Republican Party takes back the Senate on Tuesday.

The senator made his declaration during a campaign stop on Monday, according to political reporter Galen Bacharier.

“I don’t imagine I will, no,” Hawley reportedly said when asked if he would support Mitch McConnell. “I’m not sure if any other senator will run or not. Nobody’s indicated they would. But my view is that we need new leadership in that position.”

Bacharier added that “Hawley ticked off a list of decisions over the last 2 years he disagreed on – Ukraine funding, infrastructure & public safety bills, campaign spending in AZ/NH. ‘I did not agree with the idea that you go out there and badmouth our own candidates in the middle of an election.’”

As Breitbart News reported, the Alaska Republican Party voted to censure Mitch McConnell in October for using his Senate Leadership Fund to spend “$9 million against [Republican Kelly] Tshibaka to protect 21-year incumbent and pro-impeachment Sen. Lisa Murkowski (R-AK), who is in a very tight reelection race.” 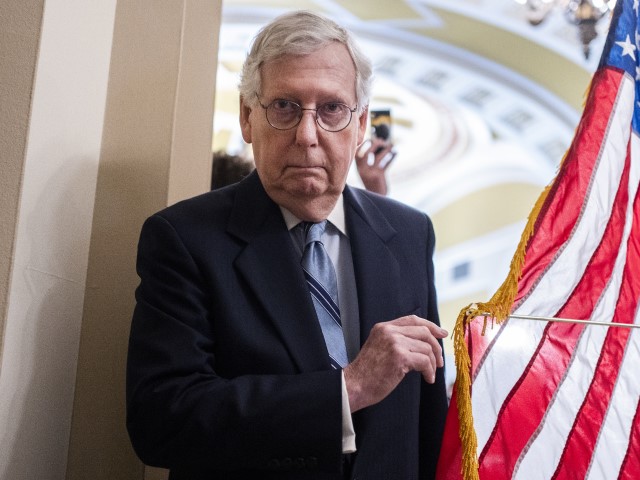 “Finally, be it resolved that we request the Senate Leadership Fund immediately stop the attack ads against Kelly Tshibaka and discontinue the support of all other opposing candidates,” it continued.

“Several candidates declared their opposition to McConnell and attacked their GOP primary opponents for not taking a stance on the question,” the Hill noted. “Other candidates deflected, or spoke on background about the bind they’re in over the question of McConnell’s leadership.”

Spread the love Former President Donald Trump is making a “major announcement” at his Florida home, Mar-a-Lago, on Tuesday, November 15. Trump teased this announcement on Monday, November 7, at the final “Save America” rally of the 2022 midterm cycle in Ohio. Since then, most observers have predicted that his remarks will concern his plans […]

Sen. Patty Murray (D-WA), a 30-year incumbent, has won reelection against Republican opponent Tiffany Smiley. While it was a long shot, Republicans began to look favorably on it as a pickup opportunity closer to Election Day as Smiley started polling closer and even, in some polls, took the lead. With 54 percent of the vote […]