Republican Herschel Walker has a narrow single-digit lead over incumbent Sen. Raphael Warnock (D-GA) in the race for the U.S. Senate in Georgia, according to a trio of polls published in the final days of the race.

One of the polls, taken by the Trafalgar Group from November 4 through November 6, shows Walker ahead by three points, receiving 50 percent, compared to Warnock’s 47 percent.

Should Walker attain at least 50 percent plus one vote on election night, he would cross the threshold required by Georgia law to win the race outright and avoid a runoff. In the event of a runoff, a second race between the two candidates would take place on December 6.

The two other polls show Walker edging out Warnock but not achieving the majority necessary to win without a runoff.

The race between Walker, a Georgia football legend, and Warnock, a longtime pastor of the historic Ebenezer Baptist Church, is one of the top contests to watch Tuesday as Republicans aim to retake the Senate majority.

It is one of just a handful of battleground races widely deemed a toss-up and has also become one of the most expensive races of the midterms. In addition to the tens of millions raised and spent by the candidates’ own campaigns, outside spending — the majority of which has been on negative ads — exceeds $146 million, according to OpenSecrets. 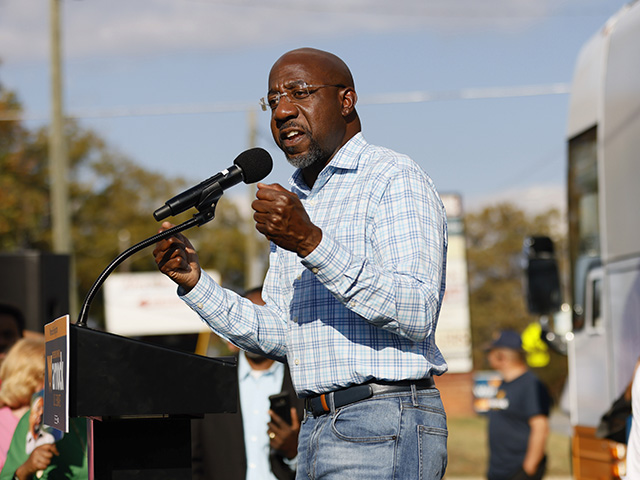 One of the two other polls, a Landmark Communications poll taken November 4 through November 7, found Walker ahead by one point, receiving 47 percent, compared to Warnock’s 46 percent.

The third poll, taken by InsiderAdvantage and Fox 5 Atlanta on November 6, found Walker up by two, receiving 49 percent, compared to Warnock’s 47 percent.

The polls, all taken among likely voters, come as more than a third of Georgia’s active electorate has already voted.

The Georgia secretary of state’s office reported that as of the last day of early in-person voting, which was Friday, more than 2.5 million people had cast their ballots through in-person and absentee voting, a massive early turnout number on par with the 2020 presidential election, when about 2.6 million people cast early ballots.

Spread the love On Monday’s broadcast of CNN’s “OutFront,” host Erin Burnett stated that it’s clear that China’s Xi Jinping “does not care what Biden says” on Taiwan. During an interview with New York Times columnist Tom Friedman, Burnett said, “I mean, after the meeting, of course, as you know, Biden said that Xi understood […]

A Democratic legislator is missing from the House of Representatives and potentially denying Democrats one vote as they try to stop the GOP’s narrow majority from taking control of the House. Rep. David Scott (D-GA), age 77, has not been seen in public for weeks, even during his landslide win on election day. His disappearance […]

As the global warming cult continues to proselytize the world with all sorts of climate nonsense aimed at deindustrializing and depopulating the West, we could not help but notice that many of the most climate “progressive” countries in the world are all claiming, via the corrupt media, that their land is somehow warming at […]