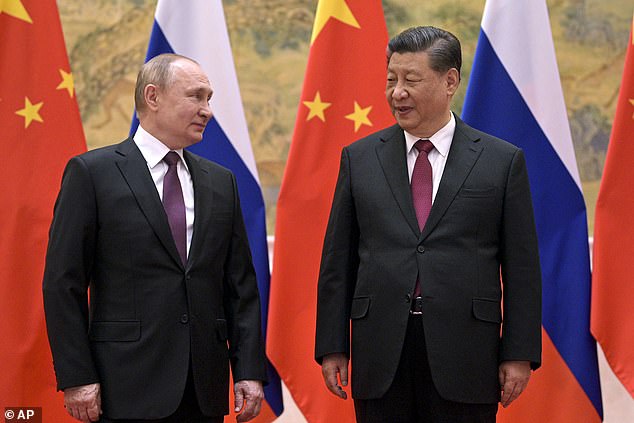 Russia and Iran appear to be cosying up amid the Ukraine war, while China is also working with Terhan as the trio positions itself against the West.

A security expert has said the terrifying prospect of China, Iran and Russia forming an axis of evil should be a huge concern for the West as the nations strike warmer relationships, which has already seen the transfer of weapons to Russian troops amid the Ukraine war. Israel’s former acting National Security Advisor Jacob Nagel told Express.co.uk in an exclusive interview that “we should all be worried” about Russia and Iran cosying up. It comes after Iranian-made “suicide drones” were reportedly used in a recent spate of brutal strikes which have taken out up to 40 percent of critical infrastructure across 16 regions of Ukraine.

But there are also concerns that Iran will become a nuclear power, which is why the 2015 nuclear deal was struck, formally known as the Joint Comprehensive Plan of Action (JCPOA), in which it was agreed that Western sanctions on Iran would be lifted in return for significant restrictions being imposed on its nuclear programme.

However, former US President Donald Trump tore up the deal in 2018, arguing that “the United States no longer makes empty threats.”. Now, world leaders are scrambling to revive a deal to limit the prospect of Iran developing a nuclear weapon.

But according to US intelligence officials, Iran is scrambling for Russian assistance in a bid to bolster its nuclear weapons programme in the event that a new deal fails to materialise.

Mr Nagel told Express.co.uk: “Russia owes Iran because Iran is sending them suicide drones and maybe in the future ballistic missiles and other weapons. I don’t think Russia would send Iran nuclear technology or systems, but all the weapons, I don’t see why they would not send them.

“They would not do it today because they (Russia) currently do not have enough (weapons to send). At this moment it is Iran that is sending Russia weapons. But after the war is over, this is one of the biggest problems. The tightening of relations between Russia and Iran is very worrying.

And he warned that a return to the old nuclear deal may not be the safest option. China and Russia were both signees of the Joint Comprehensive Plan of Action (JPCOA) given that they were part of the UN Security Council which signed the deal.

Mr Nagel said: “Russia and Iran are working together. China is doing business with Iran. Both of them are adversaries of the US…Iran wants to go back to the JPCOA. and they will agree to this horrible proposal that they have on the table.

“There would be an agreement within five minutes no matter what the Russians and the Iranians are doing in Ukraine, this is the hypocrisy with our friends in the US and in Europe.

“The US should understand that there is no agreement anymore, that’s it. Russia and China are not partners (with the UN security council) anymore. They give Iran whatever they want and they are not part of the P5+1 (the members of the UN Security Council which originally signed the deal).”

Mr Nagel also warned that Iran is helping Russia swerve the impacts of harsh Western sanctions slapped down on Moscow for invading Ukraine.

He said: “Iran is providing information, experts are going from Russia to Iran and Iran to Russia. They have warm relations and they are working together.”

This also comes after Tehran signed a memorandum of obligations that will grant it full membership in the Shanghai Cooperation Organization (SCO), an alliance that includes China and Russia, fifteen years after it first applied to join the Asian body.

Iranian President Ebrahim Raisi said in September that expanding the organisation would help to push back against Washington, decrying the “draconian” sanctions which he said required new solutions.

Trita Parsi, Vice-President of the Quincy Institute, told CNN: “Iran has managed to begin to break out of its isolation.”

He added that “in the short term, Raisi will get another smile from Vladimir Putin and some handshakes”, but stressed that it would not do much for Iran economically.

Spread the love Electric truck and SUV maker Rivian Automotive said on Friday that it is recalling nearly all of its vehicles because the company had improperly installed fasteners, which could potentially cause the loss of steering control. Rivian Automotive, an EV startup founded in 2009, is recalling roughly 13,000 vehicles built in 2021 and […]

**Jury says Alex Jones should pay $965 million to people who suffered from his lies about the Sandy Hook school massacre.** Infowars host and conspiracy theorist Alex Jones stands trial yet again in civil court in a defamation case brought by families of the Sandy Hook mass shooting victims. This time, […]

Famous actors and sports celebrities were among French stars who paraded the stage at the Paris Chocolate Salon on Friday. The unusual fashion show attracted dozens of journalists and visitors. “We saw that the Salon du Chocolat was also a place where there was artistic creation, even great artistic creation. There are dresses, beautiful sculptures […]