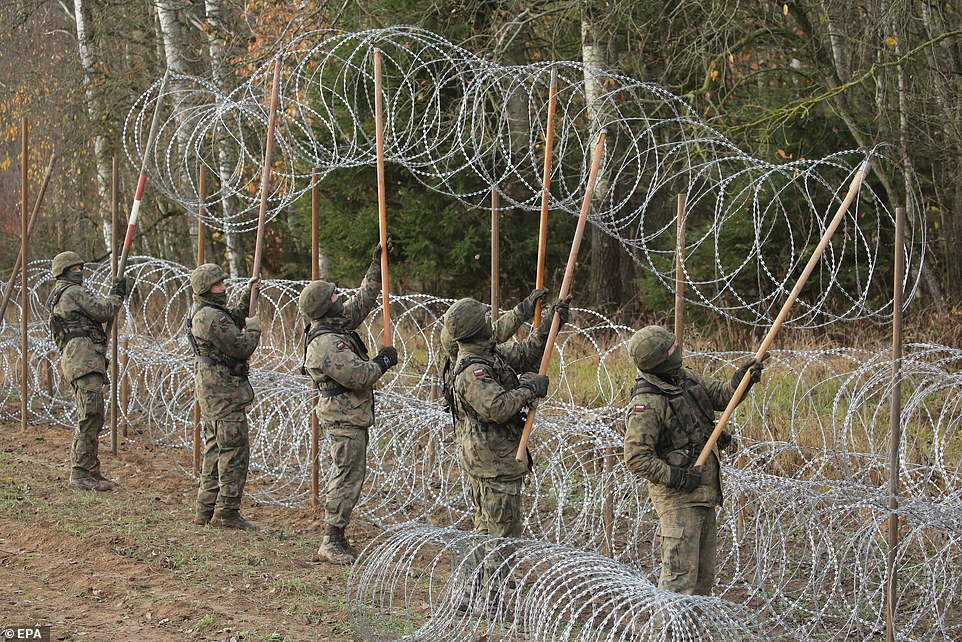 The Polish government today announced the construction of a 130-mile razor-wire fence along the border with Russia’s exclave of Kaliningrad to prevent illegal crossings.

Defence Minister Mariusz Blaszczak announced the decision amid concerns in Warsaw that Russia plans to orchestrate an influx of migrants.

‘The airport in Kaliningrad is now accepting flights from the Middle East and North Africa. I decided to take action to enhance the security of the Polish border,’ Blaszczak told reporters.

‘Already today work will begin… on a temporary barrier’ along the 130-mile border, he added.

He said the razor-wire fence will be 8ft high and 10ft wide, and will also feature an electronic monitoring system and cameras.

Poland already built a steel wall last year along its border with Russian ally Belarus after a migrant influx there.

Tens of thousands of migrants and refugees, mostly from the Middle East, have crossed or attempted to cross into Poland from Belarus since 2021.

Poland’s border guard and NGOs on site continue to report dozens of attempted illegal crossings there on a daily basis.

The West believes the influx was orchestrated by Minsk to destabilise the region, a charge denied by the Belarusian regime.

Poland sent thousands of troops and police officers to reinforce border guard patrols at the height of the crisis and approved a law allowing migrants to be forced back into Belarus.

Lithuania, too, already has a fence along its border with Russia in Vistytis.

The existing fence skirts the Suwalki Gap, a stretch of land along the Lithuanian and Polish border between Kaliningrad and Russia-loyal Belarus, which is thought to be an important chokepoint into Europe by Russian strategists.

The news comes after four Russian fighter jets were intercepted after taking off from Kaliningrad and forced to return to base after they infringed on Polish air space in early October.

Reports came that the jets also infringed on Swedish airspace. Poland is a long-time member of NATO having joined in 1999, while Sweden earlier this year applied for membership to the security bloc alongside Nordic neighbour Finland.

⚡️ VIDEO: With 100 per cent of protocols processed, 98.42 per cent of votes cast for joining Russia – CEC

Thailand’s APEC Senior Official Cherdchai Chaivaivid commented on the missile launch by North Korea at a press conference on the sidelines of the APEC meetings in Bangkok on Friday. “I’m not here to clarify Thailand’s position on the situation in the Korean Peninsula. That is perhaps the job of my fellow diplomat sitting beside me. […]