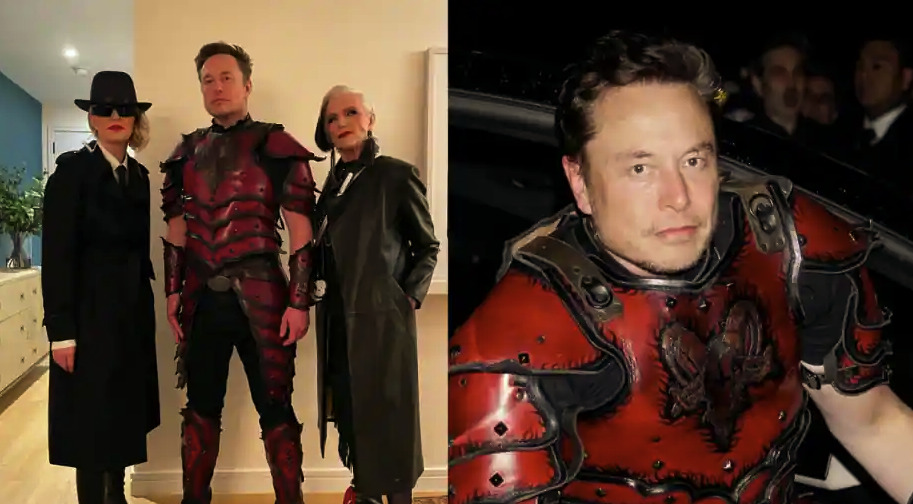 The red and black outfit worn by Musk, who completed his takeover of Twitter this week, featured an image of Baphomet carved into the chest plate with an upside down cross between its horns. And it didn’t go unnoticed.

Musk was pictured arriving at supermodel Heidi Klum’s Halloween party in the Satanic-themed costume, as reports emerge that he is preparing to cut close to 2,000 Twitter jobs, amounting to around 25 per cent of its workforce.

Musk, who dubbed himself ‘Chief Twit’ after taking over Twitter this week, looked pleased with himself in the outfit and posed for the cameras showing that – on social media at least – he is all powerful.

👿🎃 Elon Musk wore a Halloween costume called “devil’s champion” with a Baphomet and an upside down cross on it. pic.twitter.com/ZElf7x4opY

Earlier in the evening, Musk shared a picture of him and his mother, Maye Musk, in their outfits on Twitter. Maye accompanied her son to Heidi’s party, as she did the Met Gala in May.

Maye Musk also has a history of Satanic themed outfits and Illuminati symbology.

Elon Musk’s Satanic-themed outfit sparked some debate about why he would choose to wear an outfit with references to Baphomet, complete with an inverted cross.

One person wrote: “What’s up with the satanic symbolism bro?” Another suggested Musk has showed where his “allegiance lies”.

Halloween with my Mom pic.twitter.com/xOAgNeeiNN

Speaking of @elonmusk…
Can we spot any signs lately❓
I don’t know, when you analyze his Halloween costume this year, you can find such a relationship.

I leave it here rather as a curiosity pic.twitter.com/E9m3hJJVX9

In 2008, Musk was a World Economic Forum Young Global Leader. While Musk is determined to have this information removed from the internet, the fact he was once affiliated with the WEF should come as no surprise. Musk shares many of Klaus Schwab’s nefarious goals, including microchipping children and drilling chips into human brains.

Unlike other billionaires and Young Global Leaders, Musk has not appeared at Davos or allowed himself to be photographed with Schwab. Musk supporters claim this is evidence he has since turned his back on the WEF.

But there is plenty of evidence to suggest Musk is still firmly on the inside of the WEF and his front as free-wheeling capitalist technoking is part of a double-agent ruse to manipulate the masses on social media.

Russia and Iran appear to be cosying up amid the Ukraine war, while China is also working with Terhan as the trio positions itself against the West. A security expert has said the terrifying prospect of China, Iran and Russia forming an axis of evil should be a huge concern for the West as […]