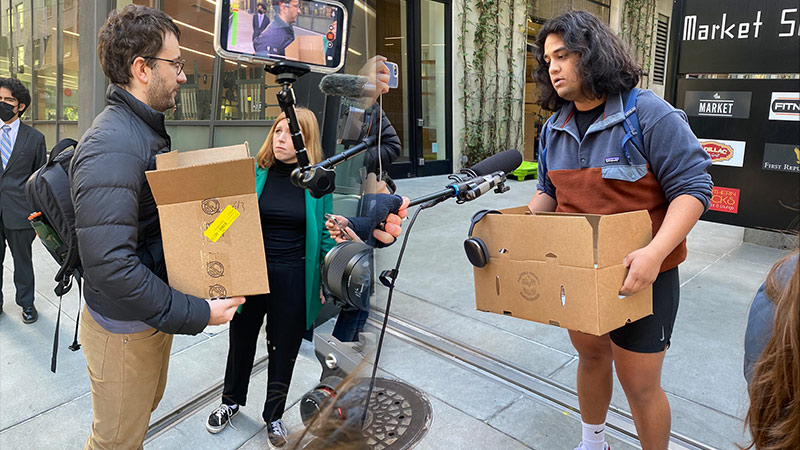 A pair of men claiming to be fired Twitter software engineers stood outside the company’s San Francisco headquarters on Friday and told reporters Elon Musk’s purchase of the social media network is a threat to democracy.

“It’s somewhere I worked at for 6 years and everything suddenly changed.”

The other man alleging to be a fired Twitter employee held up a picture of Michelle Obama and told reporters, “Obama wouldn’t have happened if Elon Musk owned Twitter. Obama in 2008 wouldn’t have happened. Free speech is a public-owned stock, not like one guy owning a company. I mean, I even own a Tesla man. I’m a big fan of clean energy, climate change, even free speech too.”

In the background, the first man interviewed said he also owns a Tesla.

One man gave his name to a reporter, identifying himself as “Rahul Ligma,” which gave away the fact that the pair of supposed Twitter employees were likely performing some type of troll stunt.

According to Know Your Meme, Ligma is “a fictional disease associated with a death hoax orchestrated by Instagram user ninja_hater that claimed Fortnite streamer Ninja had passed away after contracting the disease. The intention of this joke was to prompt concerned fans to ask what Ligma is, to which participants in the hoax would respond with ‘ligma balls’ (‘lick my balls’).”

Bloomberg reporter Ed Ludlow said sources inside Twitter think the individuals were “enacting a hoax” and “in fact, were not laid off.”

It appears as if a couple of guys pulled off an epic troll, but the fact remains that many Twitter employees are likely set to lose their jobs as Elon Musk restores free speech on the platform.

Republican Blake Masters has a narrow lead over Democrat Mark Kelly in the Arizona U.S. Senate race on the eve of the midterm election. Surveying 1,359 likely voters in Arizona between November 2-6 with a ±3 point margin of error, the Democrat-leaning Data for Progress poll showed Masters leading Kelly 50 percent to 49 percent, a virtual […]

Lieutenant Governor Geoff Duncan (R-GA) declared Wednesday on “CNN’s This Mornings” the 2022 election results showed it was time for the Republican Party to put former President Donald Trump “in the rearview mirror.” Donate Please Add coin wallet address in plugin settings panel Duncan said, “I think a lot of Republicans like me are waking […]