ESCONDIDO, CALIFORNIA – The Bureau of Alcohol, Tobacco, Firearms, and Explosives’ San Diego Group IV Field Office and the Escondido Police Department announced today 23 defendants were charged on various narcotics- and firearms-related charges, culminating in the seizure of 113 firearms with most of the guns being privately made firearms, more commonly referred to as “Ghost Guns” following an 18-month investigation. 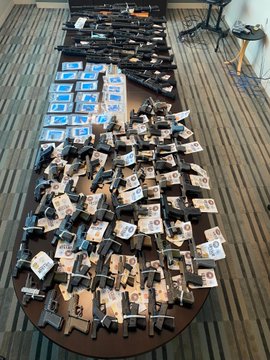 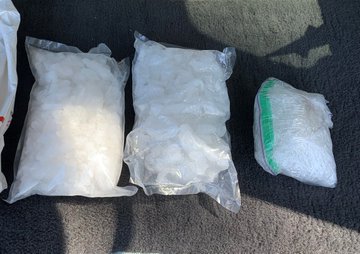 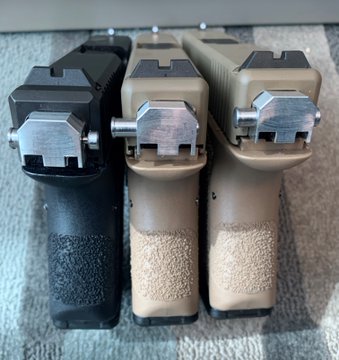 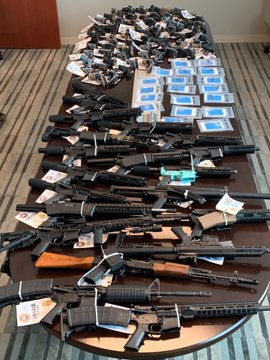 This ATF and Escondido PD proactive investigation referred to as “Operation Devil’s Den,” targeted the activity of some of the most violent and active gangs operating in and around the city of Escondido to include members of the Diablos, Westside, and Florencia 13 gangs. These targets were convicted felons making firearms to include machine guns (using machine gun conversion devices commonly referred to as “switches” and “drop-in auto sears”) and selling those firearms without a federal firearms license. Switches are designed to convert semi-automatic pistols to fire as a fully automatic weapon, and drop-in auto sears convert rifles to fully automatic weapon.  It is illegal to possess switches and drop-in auto sears.

“This joint investigation is another exemplary illustration of ATF’s commitment to creating safer communities,” said ATF Los Angeles Field Division Special Agent in Charge Monique Villages. “ATF is working nonstop with our local law enforcement partners to disrupt the private manufacturing of firearms and machine gun conversion devices. What ATF saw 10 years ago with the emergence of the ghost gun phenomena, is now what ATF is seeing with the emergence of machine gun conversion kits. The same criminals making and trafficking their own firearms are some of the same criminals trafficking the conversion devices.”

In 2021, ATF seized 1,576 machinegun conversion devices as evidence through the course of its investigations. That was a 438 percent increase from 2020.

“The Escondido Police Department places a high priority on combating violent crime and keeping our community safe,” said Escondido Police Department’s Interim Chief David Cramer. “An integral part of that endeavor is the partnerships we maintain with other law enforcement agencies. We are proud of the collaboration with our federal partners to keep dangerous and illegal weapons out of the hands of prohibited persons.”

“With the extensive proliferation of ghost guns, the U.S. Attorney’s Office has redoubled its efforts to prosecute federal crimes involving firearms. We greatly appreciate the work of our federal, state, and local partners in protecting our communities and their outstanding work on these cases.” said U.S. Attorney for the Southern District of California Randy Grossman.

About one-third of the criminal cases that resulted from Operation Devil’s Den are being prosecuted by the San Diego County District Attorney’s Office. The DA’s Office is reporting an uptick in gang-related cases it has filed, from 368 in 2020 to 465 in 2021.

“This operation demonstrates that we continue to grapple with an increase in gang-motivated shootings and the ongoing proliferation of ‘ghost guns’– firearms that are usually untraceable,” said San Diego County District Attorney Summer Stephan. “The increase in our prosecutions paint a disturbing picture of gang violence on the rise in the county. We will continue to collaborate and cooperate with our law enforcement partners in the North County—and across San Diego County—to address gang violence through prosecution and prevention.”

Many of the defendants were a threat to public safety and needed to be arrested immediately due to the large quantities of firearms they were making and selling. Therefore, there was no traditional arrest of the defendants all at once.

*One federal defendant, who is charged with Distribution of Methamphetamine Title 21 U.S.C. § 841(a)(1) is not yet in custody. There is a current warrant for his arrest.

*One federal defendant’s name is not being released due to the ongoing investigation.

These federal defendants have pled guilty to the following:

The statutory maximum penalties are five years in prison for engaging in the business of dealing or manufacturing firearms without a license; 5 to 30 years consecutive mandatory minimum depending on the circumstances for carrying, using or possession a firearm in connection with a crime of violence or drug trafficking; up to five years in federal prison for conspiracy to defraud the U.S.; 10 years in prison for illegal possession of a machine gun; 10 years for felon in possession of a firearm; not more than three years of supervised release, and a fine.

US Secretary of State Antony Blinken reiterated the United States’ commitment to restoring Ukraine’s critical energy infrastructure during a press conference on the sidelines of the NATO foreign ministers meeting in Bucharest on Wednesday. “The United States will commit over $53 million to send equipment to help stabilize Ukraine’s energy grid and keep Ukraine’s power […]

Spain: ‘I don’t know what we will do’ – Olive oil harvests drops by more than half after severe droughts

Olive oil producers in the province of Huelva are growing increasingly concerned after losing as much as 70 per cent of their crop yield following an extremely hot summer, as seen in footage captured on Thursday. “This campaign has been very bad. Here we calculated that we would get a specific percentage of olives, and […]

His ‘Black Ass Was Nowhere Near the Holocaust’ – Market Subset News

Comedian Dave Chappelle opened his hosting duties on Saturday Night Live with a monologue sympathizing with Kyrie Irving and Kanye West in the midst of their antisemitism controversies. About four minutes into his set, Chappelle waded into the mess NBA star Kyrie Irving got himself into last week when he was suspended for posting a […]