You can mark Louisiana State University head coach Brian Kelly as a thumbs down on those instant replays that he says are “ruining the game.”

Kelly was irked last weekend when his game against the Florida Gators was halted five times while refs reviewed the video on calls, according to Fox Sports.

LSU won the game 45-35, but the constant delays got under Kelly’s skin.

During his Monday presser, Kelly took aim at the constant use of instant replays. 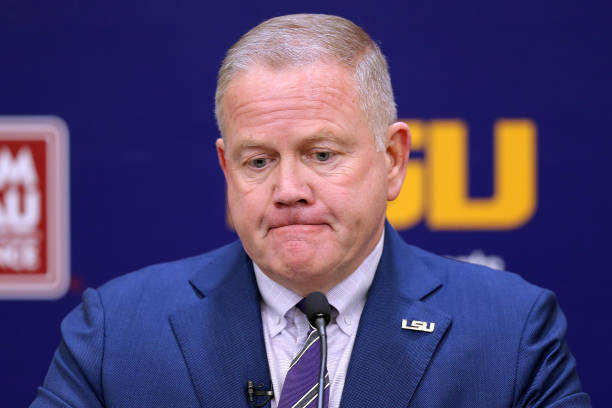 Brian Kelly speaks after being introduced as the head football coach of the LSU Tigers during a news conference at Tiger Stadium on December 01, 2021, in Baton Rouge, Louisiana. (Jonathan Bachman/Getty Images)

“There were some things that happened in that game that just – my biggest concern is that we’re just slowing the game down,” Kelly said Monday.

“Hopefully, it’s something we can look at at the end of the season,” Kelly added. “Maybe it can be instant replay on scoring plays only or change of possession. If you feel like it’s egregious, throw the red flag out there. But it just seems like we’re slowing the game down. That will be a topic that we can have after the season ends.”

“Ten out of 10 times, the call stands on the field. Unless it’s an LSU call, right?” Kelly said on his weekly radio show Thursday, according to ESPN. “Or is it just me? I just don’t think they like the guy from up north.”

Kelly added that he was triggered by the reversal of a fumble call against the Gators.

“Here’s how it was explained to us: If you break it down to the millisecond by a frame, his hand is slightly moving forward by a frame,” Kelly said. “So, if we’re going to get to that level, it’s amazing. Like, instant replay is ruining the game.”

“I WAS ABOUT TO PULL OVER, MAN!” Arkansas State Police Pursuit Ends With PIT Maneuver, Rollover Crash – Market Subset News

On Friday’s broadcast of MSNBC’s “Alex Wagner Tonight,” Rep. Dina Titus (D-NV) said she thinks it’s “very likely” Democratic governors, like defeated Nevada Gov. Steve Sisolak, struggled relative to congressional Democrats because they had to oversee COVID shutdowns, but defended Sisolak’s COVID policies by arguing that if he hadn’t taken the approach he did, “the […]