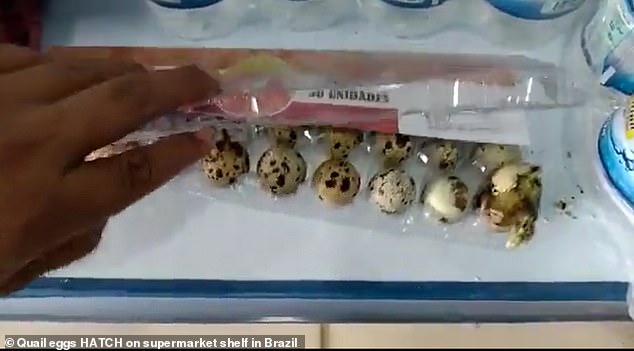 This was certainly a sale that shoppers were not expecting to catch at a supermarket in the northeastern Brazilian state of Piauí.

A manager and one of his workers were shocked at the sight of a bevy of quails hatching out of a carton of eggs last month, viral video footage shows.

Supermarket manager Fábio Gomes told news portal G1 that Manoel Pereira alerted him about a strange sound that was emanating from the shelf area and spotted something moving inside the plastic carton that was packed with 30 eggs on September 21.

The other three quails followed by hatching out of the eggshells before he placed the first chick back in the carton.

‘We were very surprised to find the chicks being born,’ Gomes said. ‘I had already moved the cartons because of the heat because they are made of plastic.’

Two of the quails died two minutes after they hatched. The other two were turned over to an egg supplier and died the following day.

‘The supplier was amazed too, he only believed it because I was telling him,’ Gomes said. 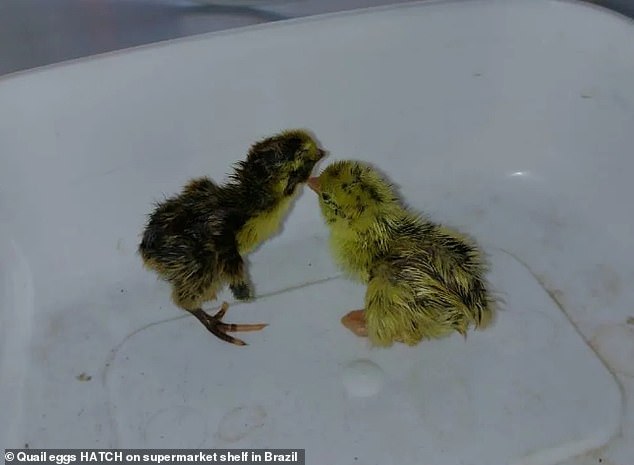 Local zootechnic Bruno Costa told G1 that supermarkets are required by law to sell eggs from authorized farms that only have females.

‘There were males along with females where did these eggs come from,’ Bruno said.

‘Eggs for consumption should not be hatched [fertilized] due to shelf life. The responsible farms acquire lots of females only. Sometimes control is not effective and they send fertile eggs to markets.’

Mateus Vieria, a biologist, explained that heat and humidity inside the supermarket played a role in the hatching of the four quails.

‘The temperature above the ideal, 98.96 degrees, can anticipate the hatch. Below, it can delay. Both cases bring developmental damage to the birds.’

World Cup referees took part in media day and practice session in Doha on Friday, with the Chairman of FIFA’s Referee’s committee Pierluigi Collina, ahead of 2022 FIFA World Cup. FIFA referees have prepared for the tournament with a training session at the Qatar Sports Club. Salima Mukansanga, from Rwanda, is one of the three […]