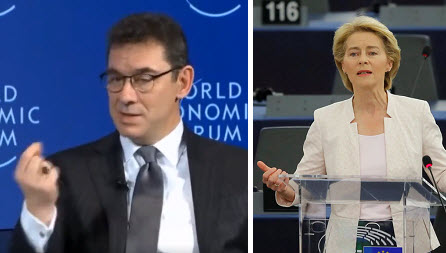 Two weeks after Pfizer CEO bailed on EU testimony in the wake of a report highlighting a ‘secretive’ vaccine deal between himself and European Commission President Ursula ‘missing texts‘ von der Leyen, the European Public Prosecutor’s Office (EPPO) has opened an investigation into the EU’s Covid-19 vaccine purchases, Politico reports.

EPPO, and independent EU body, is responsible for investigating and prosecuting financial crimes, including fraud, money laundering and corruption, according to the report. In its Friday announcement, the body did not specify who was being investigated, or which contracts were the subject of inquiry.

That said, two other watchdog agencies have brought attention to the von der Leyen – Bourla deal.

“This exceptional confirmation comes after the extremely high public interest. No further details will be made public at this stage,” said the EPPO.

In April 2021, the New York Times first reported on text messages exchanged between von der Leyen and Pfizer CEO Albert Bourla in the run-up to the EU’s biggest vaccine procurement contract — for up to 1.8 billion doses of BioNTech/Pfizer vaccine. The deal would be worth up to €35 billion if fully exercised, according to leaked vaccine prices.

In January this year, the EU’s ombudsman charged the Commission with maladministration for failing to look for the text messages in response to a freedom of information request. Without confirming the existence of the texts, the Commission argued in its response that “short-lived, ephemeral documents are not kept.” It said that a search for the text messages hadn’t yielded any results. -Politico

Last month, the European Court of Auditors published the aforementioned report in which it said the Commission refused transparency regarding details of von der Leyen’s personal role in the Pfizer contract.

In it, the budget watchdog found that the EU chief went rogue in order to personally hammer out a preliminary deal with Pfizer, instead of relying on joint negotiating teams. While the Commission has been forthcoming with other vaccine contracts, it has refused to provide the court with any documents regarding those preliminary negotiations.

According to Belgian Socialist MEP Kathleen van Brempt, “several aspects” of the Pfizer contract should be investigated, including “the text messages between the Commission President and the fact that there is no paper trail of the preliminary negotiations in first instance.”

According to Politico, “The MEP chairs the European Parliament’s special committee on COVID-19,” adding that both the EU’s ombudsman and a member of the European Court of Auditors have made appearances before the panel.

“The [COVID-19] committee will be following this case with great attention,” said Van Brempt.

Advertisement OPINION: This article may contain commentary which reflects the author’s opinion. President Joe Biden has been contradicted by his own White House when it comes to the price of gasoline. As the midterm elections approach, the price of gas has been one of the main concerns for many voters and the Biden administration is […]

New Hampshire Republican Karoline Leavitt is vying to become the youngest woman in history to be elected to Congress and spoke during an appearance on Breitbart News Saturday about how her age was a driving factor in her decision to run for office. Leavitt, who turned 25 in August, said she saw a need for […]

Presidential candidates Jair Bolsonaro and Lula da Silva held a final debate in Rede Globo studios in Jacarepagua, Rio de Janeiro, on Friday, ahead of the second round of the presidential elections. The footage shows crowd cheering for candidates’ arrival outside TV studio as well as Bolsonaro and Lula getting ready for the debates in […]