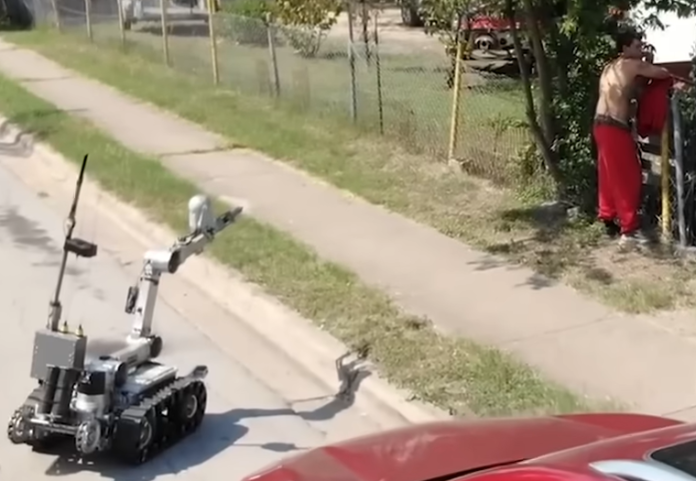 Austin, Texas — On Friday, September 23, 2022, at approximately 9:19 a.m., Austin Police Department received a 9-1-1 call of a disturbance between a man and a woman regarding child custody in the 6100 block of Fairway Street. Patrol officers were dispatched to the location of the call. The woman caller provided information that a man had a gun in his pocket and displayed it. It was also indicated that children were involved. The man was later identified as Antonio Gonzales. Patrol officers arrived on scene in marked APD vehicles at 9:35 a.m. Upon the officer’s arrival, Gonzales did not have the children in his custody. Gonzales exited a vehicle and began walking around in the middle of the 1700 block of Brassie Street, near the previous call location. He was armed with a handgun. He point the gun at his head placing it against his temple and then placed it in his waistband. Officers made verbal contact with Gonzales and attempted to de-escalate the situation by engaging with him and providing him with commands to lay on the ground.

Officers on scene repeatedly told Gonzales they did not want him to get hurt and wanted to help. Gonzales did not comply with any of the several commands. During verbal contact with officers, Gonzales said he was going to kill himself several times. A crisis intervention officer arrived on scene at 9:43 a.m. At 9:47 a.m., SWAT was called to the scene. While waiting for SWAT’s arrival, officers on scene continued to ask Gonzales to drop the gun. At 9:51 a.m., Gonzales said he would shoot himself if officers refused to shoot him. At 9:53 a.m., the first officer trained as a hostage negotiator arrived on scene and began communicating with Gonzales. At 9:59 a.m., the first SWAT officer arrived on scene. This became an “open-air SWAT call,” which describes a situation where a subject is not inside a vehicle or a structure, and they are in an outside environment threatening themselves and or others. Officers were concerned for the safety of Gonzales and other people in the neighborhood, so officers attempted to evacuate all of the homes in the immediate area. There were some residents inside the homes who decided not to evacuate, and instead chose to shelter in place.

For approximately two hours, APD crisis intervention officers and hostage negotiators attempted to de-escalate the situation by speaking to Gonzales through both a loudspeaker and a mobile phone. The gun Gonzales had placed in his waistband remained visible to the officers, and was easily accessible to Gonzales. At 11:51 a.m., SWAT officers approached Gonzales with taser and less-lethal means to attempt to take him into custody. SWAT Officer Oborski and SWAT Sergeant DeLaRue deployed two Department issued Tasers, and SWAT Officer Olejar deployed Department issued less-lethal munitions at Gonzales, but these means were ineffective. Gonzales then reached for his gun and attempted to pull it from his waistband. SWAT Officer Coker fired his Department issued firearm towards Gonzales striking him. Gonzales then fell to the ground.

After officers confirmed that Gonzales was no longer a threat, they approached him to provide life-saving measures. At 11:59 a.m., Gonzales succumbed to his injuries and was pronounced deceased on scene. The woman who originally called 9-1-1 and the children were unharmed. Civilians and the officers on scene did not sustain physical injuries.

Former Philadelphia sheriff’s deputy Samir Ahmad is facing charges of trafficking firearms, two of which were used in the September 27, 2022, attack on football players following a scrimmage between Roxborough High School and Northeast High School. ABC 6 reports 29-year-old Ahmad “has been arrested and charged with trafficking and selling guns.” The U.S. Attorney’s Office for the […]

Thousands of Hindus attended the Chhath Puja festival on the banks of the Yamuna River at the Kalindi Kunj Bridge in New Delhi on Sunday. This year’s celebration began on October 28 and continues for four days until October 31. It is one of the most popular festivals for the people in northeastern Indian states […]

German Chancellor Olaf Scholz tested positive for COVID-19 on Monday, as Deputy Spokesperson of the Federal Government Wolfgang Buchner said during press conference in Berlin on Monday. Scholz has ‘mild cold symptoms’, according to the German government. After receiving the test results, Scholz was immediately isolated in the Chancellor’s flat at the Federal Chancellery. All […]