“We need help — and we need to now,” Democratic Mayor Eric Adams said in a Friday press conference, adding:

Today we’re issuing a clear message — [the] time for aid to New York is now. We need help from the federal government. We ned help from the state of New York. Our city is doing our part and now others must step up and join us …. We need those to come through.

We need legislation that will allow these asylum seekers to legally work now, not the six months … We need a coordinated effort to move asylum-seekers to other cities in this country to ensure everyone is doing their part and Congress must pass emergency financial relief for our city and others. Finally, we need a bipartisan effort to deliver long awaited immigration reform.

“We expect to spend at least $1 billion by the end of the fiscal year on this crisis, all because we have a functional and compassionate system,” he said. 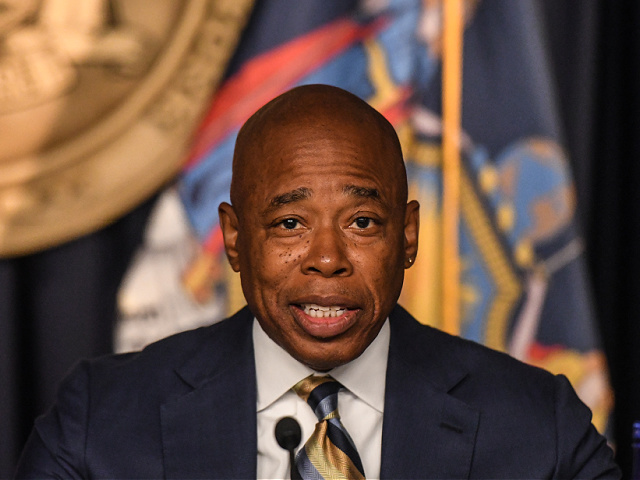 Eric Adams, mayor of New York, speaks to members of the media during a New York State Financial Control Board meeting in New York, on Tuesday, Sept. 6, 2022. (Stephanie Keith/Bloomberg via Getty Images)

The demand was $500 million two weeks ago, as officials counted the cost of housing migrants who are being drawn to the free overnight shelters attracted to the jobs and schooling in the so-called “sanctuary city.”

The policy also generates many customers for the city’s welfare, aid, housing, education, and medical agencies. For example, Adams admitted in his speech that the city is providing overnight shelters to 61,000 homeless people each night, and is adding 5,500 migrant children to the overcrowded and failing schools needed by non-wealthy Americans in the city.

The cheap-labor migrants also provide more profits for investors in the city businesses. Without the extra labor, the investors otherwise would be forced to hire unemployed Americans in upstate New York cities, or other states such as New Jersey, Maine, New Hampshire, and West Virginia.

Overall, the Biden migrants being welcomed by Adams allow the city’s Democratic leaders to preserve their high/low economy, where a small number of wealthy landlords and investors keep political power amid a fractured city of divided, diverse, distracted, and poor voters.

Between the 1940s and about 1980, the city’s wage gap was much smaller, in part, because nearly all migrants to the city were outspoken, equality-minded Americans from nearby U.S. states, such as Pennsylvania and New Jersey.

City leaders hide their post-1990s exploitation of migrants behind the 1950s “Nation of Immigrants” narrative. That elite-imposed narrative repurposes the Statue of Liberty from a celebration of Americans’ constitution into a “Golden Door” invite for foreign economic migrants.

In his speech, Adams repeatedly declared his support for the Democrats’ policy of extracting migrants from poor countries, even as he tried to blame Republican governors for the resulting economic damage to American pocketbooks:

Our right-to-shelter laws, our social services, and our values are being exploited by others for political gain. New Yorkers are angry. I am angry too. We have not asked for this. There was never any agreement to take on the job of supporting thousands of asylum seekers. This responsibility was simply handed to us without warning as buses began showing up. There’s no playbook for this. No precedent.

But despite all this, our city’s response has been nothing short of heroic. From setting up welcome centers, organizing housing, health care, and transportation, New York city agencies and their community partners have done great work in the face of overwhelming need. New Yorkers as always, have responded to this crisis by pulling together as one.

Yet Adams simultaneously denied that the Democrats’ sanctuary city policies have any role in the migrants’ arrival.

“This crisis is not of our own making, but one that will affect everyone in this city now, and in the months ahead,” he insisted, before ending his speech with a contradictory flourish:

Generations from now, there will be many Americans who will trace their stories back to this moment in time. Grandchildren who will recall the day their grandparent arrived here in New York City and found compassion — not cruelty. A place to lay their head, a warm meal, a chance at a better future. Thank you New York, for doing the right thing.

Breitbart News has extensively covered the damage caused to citizens by the establishment’s policy of Extraction Migration.

Delegations representing the Colombian government and the National Liberation Army (ELN) militant group, the last such organisation in the Latin American country, began formal peace talks on Monday, at a hotel in the mountains of Caracas. “Let’s not say love at first sight, but trust at first sight, and the optimism of these first meetings,” […]

On Thursday’s “Hugh Hewitt Show,” House Minority Leader Rep. Kevin McCarthy (R-CA) argued that environmental, social, and governance (ESG) efforts are an antitrust violation and said that if Republicans take the majority in the House of Representatives, they will use antitrust law to go after the practice. Host Hugh Hewitt said, “So, let’s start with the […]