A Tesla driver was killed early on Saturday morning in Manatee County, Florida, when his car hit a tree along I-75 and burst into flames.

ABC 7 reports that the driver of a Tesla was killed early on Saturday when his car burst into flames following a collision with a tree along the I-75, according to Florida Highway Patrol. Investigators stated that a man was driving a Tesla southbound when he lost control of his car.

The car veered onto the highway shoulder and into a ditch where it hit a tree and caught fire. The driver was unable to exit the vehicle and was pronounced dead at the scene. The man has yet to be identified. 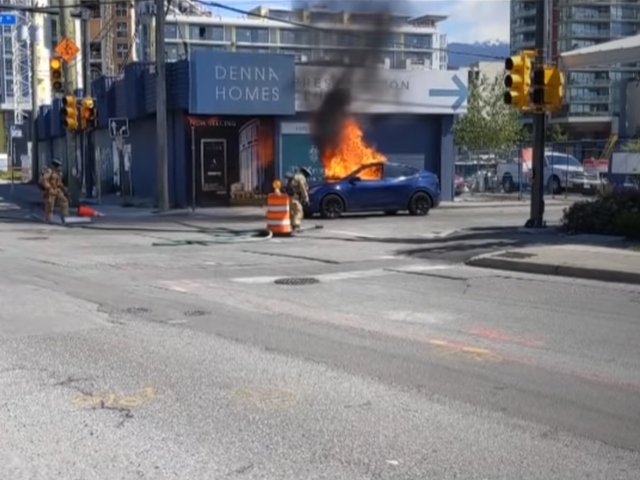 First responders in Oklahoma recently underwent special training to handle electric vehicle (EV) crashes and fires following a growing number of incidents throughout the U.S. One training coordinate explained why special EV training is required, explaining: “They burn significantly hotter so they can throw a 2,000-degree flame out like a torch.”

European Space Agency (ESA) astronaut Samantha Cristoforetti became the first European woman to take command of the International Space Station (ISS) during a livestreamed ceremony on Wednesday. Outgoing commander and Russian cosmonaut Oleg Artemyev handed over a symbolic golden key to Italian astronaut Cristoforetti, who will now command the ISS until her return to Earth […]

A Portland mother was startled when she recently discovered a homeless woman sleeping in her ten-year-old son’s bed. The intruder was released the following day by the county’s liberal district attorney. Kelsey Smith’s Ring security camera footage captured an intruder, later identified as Terri Lynn Zinser, 54, breaking into her Portland home and making her […]

On Friday’s broadcast of HBO’s “Real Time,” host Bill Maher quipped that Florida Gov. Ron DeSantis (R) sent the message to migrants “if you come here, you will get a free plane ride to a wealthy island.” And that the trip the migrants took sounds like the cruise he got his parents. Maher also jabbed […]