House and Senate Democrats are looking to send 600 times as much American taxpayer money to Ukraine than funds that would go to help fix the water crisis in Jackson, Mississippi, where some residents continue to have contaminated drinking water.

In May, Biden signed a $40 billion military aid package for Ukraine. House Republican leadership — including Reps. Kevin McCarthy (R-CA), Steve Scalise (R-LA), and Elise Stefanik (R-NY) — voted with Democrats to approve the $40 billion while only 57 House Republicans voted against the spending boondoggle along with 11 Senate Republicans.

Now, in a short-term spending bill, Democrats are hoping to send another $12.3 billion to Ukraine — 600 times the $20 million that lawmakers are seeking to help fix Jackson’s water crisis where residents are being warned of lead contamination.

The funding for foreign countries over United States’ cities highlights an issue brought by the Republican populist wing: American taxpayer money ought to be focused on the infrastructure at home rather than overseas. 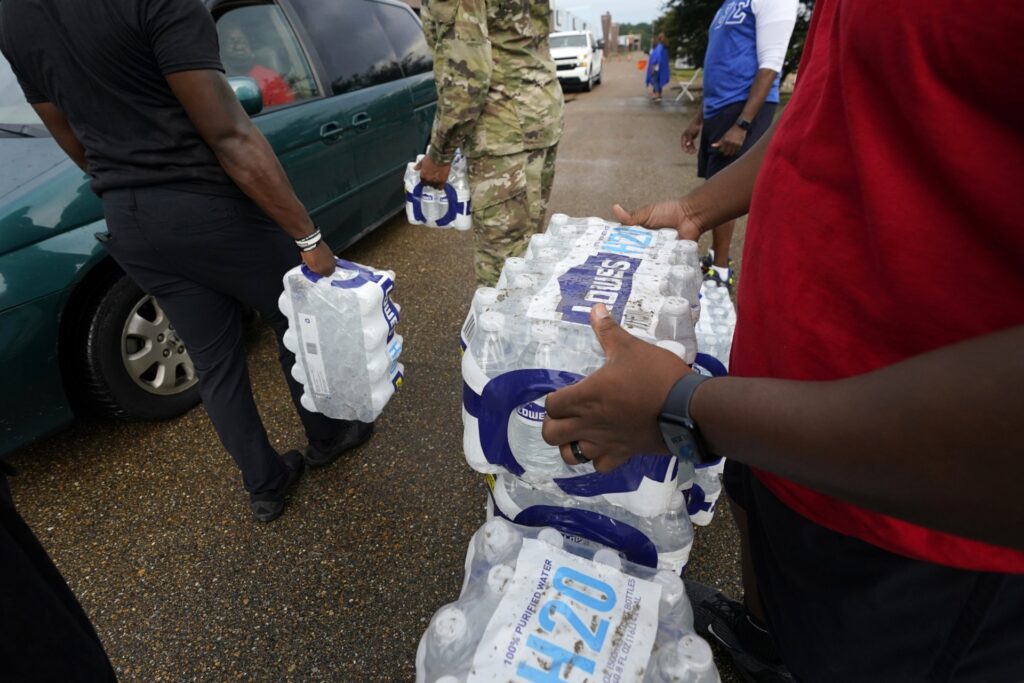 Jackson’s water crisis has persisted for some time but came to a head this month after the system failed and left thousands without clean water to use, as the Washington Post noted:

The entire city of more than 150,000 was without safe drinking water, with no end in sight. Many residents here say they adapted long ago to catastrophic government failure. [Emphasis added]

“Jackson’s water’s been messed up; I don’t even feel like they should be issuing people bills,” said Roshonda Snell, 32, who works at a local hotel. “It’s infected, and you can’t even do nothing with it.” [Emphasis added]

The water system in Jackson, the Mississippi capital, has been failing for years. In 2021, a harsh winter storm knocked the system out for a month. Even when water is flowing from the taps, residents struggle with intermittent boil-water advisories and high bills for water that is not always safe to drink. This week, in part because of severe floods, the treatment plant failed completely, leaving the city’s residents without water to drink, bathe or even flush toilets.
[Emphasis added]

Jackson residents are now second-guessing if medical issues, ailments, and skin problems that have popped up are tied to lead contamination, CNN reports:

Today, she and Andrew suspect another culprit: Lead in their hometown’s water. It’s a suspicion shared by parents of about 2,000 kids – and quite likely, many more – now suing the city and state. Compounding matters in the capital city of roughly 150,000, residents are accustomed to boiling water, so they can bathe or cook with it, but with lead, boiling water increases the concentration of the known neurotoxin and probable carcinogen. [Emphasis added]

While Jackson’s tap water is back, residents have been warned that they must be cautious to use it while brushing their teeth, showering, and cooking — instead being forced to use often expensive bottled water that has been scarce in the area.

The prime ministers of six Western Balkan nations formally signed a deal on visa-free travel between them, during a meeting in Berlin on Thursday. Footage shows the six leaders, of Albania, Bosnia and Herzegovina, Kosovo, North Macedonia, Montenegro and Serbia, along with German Chancellor Olaf Scholz and European Commission President Ursula von der Leyen. The […]

Democrat John Fetterman holds a five-point lead over Republican Dr. Mehmet Oz in Pennsylvania’s race for U.S. Senate, according to a poll. The CBS/YouGov released Wednesday shows that 47 percent of registered voters back Oz, a celebrity doctor, while 52 percent support Fetterman, the state’s lieutenant governor. Another one percent remain undecided. The candidates evenly […]