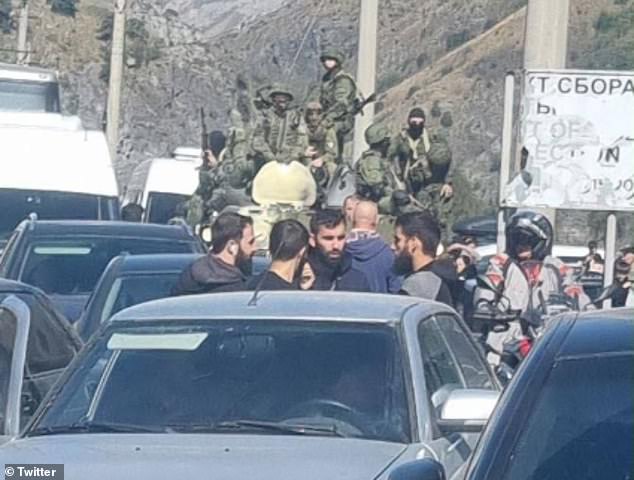 Russian troops have been deployed near the border with Georgia today even as the Kremlin tries to stamp out rumors that Putin is about to introduce martial law and ban people from leaving in order to avoid being conscripted into the army. Many are fleeing to Finland as well, about 17,000 already fled to Finland. Russia is getting empty… its citizens are fleeing. Soon there will be only Putin with Shoigu and Lavror left in Russia.

Footage geolocated to the small town of Chmi, on the main highway from Russia into Georgia’s South Ossetia region, shows at least six soldiers sitting on top of an armoured vehicle passing a queue of cars in the direction of the crossing.

Troops arrived to set up a checkpoint, sources told the Russia’s RBC network, with the FSB saying they were sent to stop people storming the crossing after miles-long queues of men trying to dodge the draft built up.

But it raised fears that Putin is preparing to seal Russia’s borders to stop men fleeing the draft, amid reports that 260,000 have fled in just five days.

Dmitry Peskov, asked about rumours of border closures and martial law today, insisted that he had no idea about any such plans.

‘No decisions have been made for now,’ he told reporters in Moscow.

Meduza was first to report rumours that the borders could be sealed, citing a source within the presidential palace who also revealed the figure that were estimated to have fled across the border

In a rare admission, the Kremlin did admit ‘errors’ in the mobilisation – saying Putin’s order to conscript 300,000 men with military experience had not been followed, after footage showed middle-aged men and students being drafted.

But, Peskov insisted, ‘instances of non-compliance (with the decree) are decreasing. We hope this will speed up and that all errors will be corrected.’

However, there appeared little sign that compliance was improving today as a commissar in the Siberian region of Irkutsk was shot inside a draft office.

Investigators said the suspect was a 25-year-old local, and a woman who identified herself as his mother said he was ‘very upset’ after his friend – who had no prior military experience – received call-up orders.

‘They said that there would be partial mobilisation, but it turns out that they are taking everyone,’ the woman, Marina Zinina, was cited as saying by local media.

Regional governor Igor Kobzev said a recruitment officer had been wounded and that ‘doctors are fighting for his life’.

‘I’m ashamed that this is happening at a time when, on the contrary, we should be united. We must not fight with each but against real threats,’ Kobzev said.

Russian President Vladimir Putin announced a ‘partial’ mobilisation last week after Moscow’s army faced a bruising counter-offensive that saw them pushed back from much of Ukraine’s eastern Kharkiv region.

The announcement sparked panic and demonstrations, with more than 2,000 anti-mobilisation protesters detained across the country.

Critics have accused the Kremlin of focusing conscription efforts in remote regions like Siberia or the North Caucasus populated by ethnic minorities to avoid sparking dissent in urban centres, especially Moscow.

Authorities in the North Caucasus republic of Dagestan arrested more than 100 people at anti-mobilisation protests, a police-monitoring NGO said.

Footage on social media showed violent confrontations between protesters and police in the poor and Muslim-majority republic, which has seen more men killed in Ukraine than any other part of Russia, according to a tally of death notices compiled by Russian media.

‘Why are you taking our children?’ one woman could be heard shouting in protest videos shown by Russian media.

The OVD-Info police monitoring group said 24 people had been arrested at similar protests on Sunday in Yakutsk, the capital of the vast eastern Siberian region of Yakutia.

Since Putin’s announcement last week there have been several attacks on recruitment centres in Russian regions.

Authorities said assailants had tried to set fire to an office in the southern city of Volgograd in the early hours of Monday.

Analysts have said the mobilisation was spurring protests against the Kremlin in regions usually loyal to Moscow’s political ambitions and could dent Putin’s popularity.

The mobilisation was showing signs of causing further economic strain, compounding Western sanctions on Moscow for sending troops into Ukraine.

The Moscow stock exchange plunged 10 percent on Monday to its lowest point since Russia began its Ukraine offensive seven months ago.

US Secretary of State Antony Blinken said his administration would ‘never recognize the annexation of Ukrainian territory by Russia’, during a press briefing with Minister of External Affairs of India Subrahmanyam Jaishankar in Washington DC on Tuesday. “We and many other countries have already been crystal clear. We will not indeed we will never recognize […]

The Ukrainian and Russian sides accused each other of shelling a convoy of refugees on the border of Lugansk and Kharkov regions, that happened on Sunday, September 25. Footage, released by the Security Service of Ukraine (SSU) on its Telegram channel on Saturday, shows burned and shelled cars left on the road and corpses. According […]

Emergency services were seen working at the scene of a shooting at Izhevsk school No. 88 on Monday. The footage shows a police cordon near the school, officers patrolling the area, and a vehicle from the Russian Investigative Committee The national guard’s press office reported that “riot police officers and the Special Rapid Response Unit […]