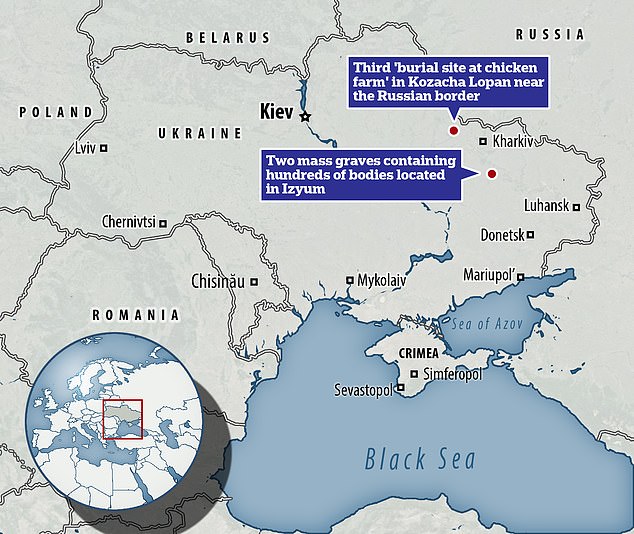 Ukraine has discovered two more mass graves containing the bodies of hundreds of people in the the northeastern town of Izyum, which Kyiv recaptured from Russia this month.

Ukrainian President Volodymyr Zelensky said the mass burial sites were found in Izyum in the Kharkiv region – days after the area was liberated by Ukrainian troops having spent four months under Russian occupation.

Ukraine is also probing a third suspected mass burial site located in a shell-damaged and abandoned industrial chicken farm in Kozacha Lopan, a mile away from the Russian border.

It is not known how many bodies lie there – Ukrainian troops and officials speak of 90 to 100 without saying how they know – but the signs of recent violence lie in rubble all around the chicken farm.

Reports of the grim discoveries comes after Ukrainian authorities uncovered a large burial site further south containing the bodies of 447 people next to a cemetery in a wooded area in Izyum.

In total there were 425 civilians buried in the mass graves, including five children, and 22 Ukrainian servicemen.

Zelensky said that two further mass burial sites have been found in Izyum.

‘The sanctions need to continue. These sanctions will have political impact, as well as financial impact.’

Further north, a potential mass grave has been discovered in Kozacha Lopan. De-mining teams have not yet arrived at the site and the suspected burial site has yet to be disturbed.

‘I was told by the soldiers who came to our village that they saw a burial place of soldiers, but they didn’t specify the number,’ said Lyudmyla Vakulenko, head of the Kozacha Lopan local administration.

‘They said a specialised unit would look into it,’ she added.

The forensic teams are expected later this week, once the area is deemed safe for work. On Monday, soldiers moved gingerly, avoiding unpaved areas, wary of mines and unexploded shells.

But reports of the potential mass burial will confirm the worst fears of Ukrainians, still shocked by the discovery of a makeshift forest cemetery containing 447 bodies in Izyum.

The Kharkiv regional governor, Oleg Synegubov, said that most of the Izyum bodies showed signs of a violent death and that 30 of the victims appeared to have been tortured beforehand.

Meanwhile, it is not yet known whose bodies lie in the chicken plant. Soldiers guarding the complex told AFP they expected to find the corpses of both Russian and Ukrainian troops and local civilians.

But Vakulenko says the officer who told her of the find said the military thinks it is a grave for soldiers, and that she has received another clue as to the soldiers’ potential identity.

On April 22, she says, a Ukrainian force from the 72nd Mechanised Brigade counterattacked Russian forces dug in near the chicken plant, but were beaten back with heavy casualties.

The area was finally liberated by Ukrainian forces this month, and over the weekend Vakulenko – who runs the civil administration in the border area north of the city of Kharkiv – got a call.

‘Yes, there was a phone call on the community hotline from a woman named Olena. I don’t know if she’s a relative or a friend, just ‘Olena’,’ Vakulenko told AFP.

‘She left her phone number said that some of her relatives or friends were killed on April 22 near the village of Kozacha Lopan.

‘She asked, ‘Can I get some official information?’ And we answered: ‘So far, no. Until the exhumation is carried out. Until this unit does its work and tells us what happened’.’

Whoever is buried under the chicken plant, it seems clear who was there when the burials took place. The hangars and outhouses are full of the signs of Russian occupation.

Deep trenches have been dug under the floors of some of the sheds, each the size of the tank that would have squatted there under the cover of the cavernous, metal-roofed poultry barns.

A Russian tank crewman’s leather helmet hung on a fence post, and a Russian-issue military jacket lay in the mud.

Ukrainian forces said the unit based there was recruited from Abkhazia, a breakaway region of Georgia under Russian occupation.

In the farm’s mechanical workshop, a bunker has been dug under the concrete floor, and the former residents have built a makeshift gym with a concrete barbell and a punching bag made of car tyres.

A shell hole has ripped through one corner of the roof, allowing a shaft of sunlight into the gloom.

Spread the love Hispanic Americans, gravitating to the nationalist-populist wing of the Republican Party, are turning on Democrats over the top issues in this year’s midterm elections: Crime, inflation, immigration, and a corporate-backed woke social agenda. Tim Alberta for The Atlantic traveled across Arizona, Florida, and Texas to find that Hispanics who had been voting […]

Turkey: ‘We will eradicate them all’ – Erdogan vows to destroy ‘terrorist’ Kurdish militant groups

Turkish President Recep Tayyip Erdogan vowed to ‘eradicate’ all ‘terrorist’ Kurdish militant groups in the northern regions of Syria and Iraq during the opening ceremony of a hydroelectric dam in Artvin on Tuesday. “For a few days now, we have been on top of the terrorists with our planes, cannons and UAVs. I hope that […]