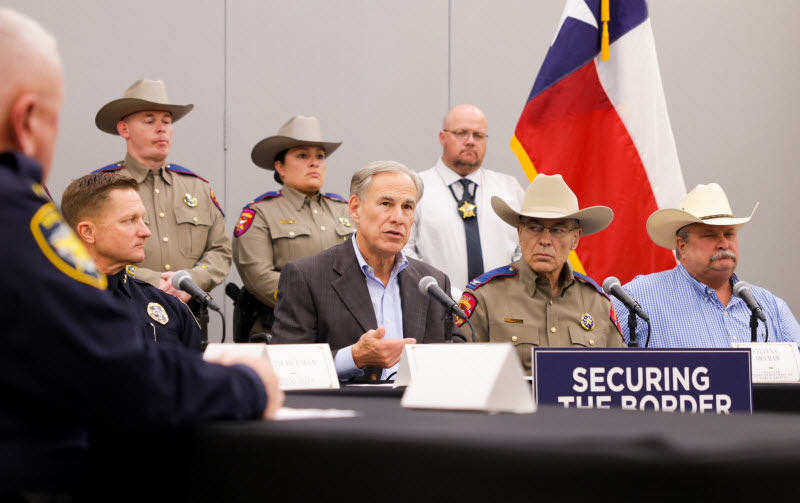 Texas Republican Gov. Greg Abbott is tired of waiting on the Biden regime to secure the border because he knows that’s not going to happen.

As such, he is taking bold new action on his own to protect Texans from an onslaught of illegal aliens and deadly fentanyl smuggling.

On Wednesday, Abbott announced that he has signed an executive order designating the Mexico-based cartels as terrorist organizations while also empowering the Texas Department of Public Safety to take appropriate action to secure the border.

“I also sent a letter demanding the Biden Admin. classify Mexican drug cartels operating in Texas as terrorist organizations. Texas is stepping up to get these gangs & deadly drugs off our streets,” he added.

Texas is stepping up to get these gangs & deadly drugs off our streets. pic.twitter.com/nhfeVo2ESm

“Fentanyl is a clandestine killer, and Texans are falling victim to the Mexican cartels that are producing it,” Abbott added in a statement. “Cartels are terrorists, and it’s time we treated them that way. In fact, more Americans died from fentanyl poisoning in the past year than all terrorist attacks across the globe in the past 100 years. In order to save our country, particularly our next generation, we must do more to get fentanyl off our streets.”

Here is what Abbott’s action entails:

Establish a Mexican Cartel Division within the Texas Fusion Center to collect and analyze intelligence that will enable further apprehension, prosecution, and disruption of these foreign terrorist organizations.

“With Mexican drug cartels disguising fentanyl as counterfeit pills and targeting children with ‘rainbow fentanyl’ pills, the Governor emphasizes in his letter that immediate decisive action is needed from the Biden Administration to combat this deadly crisis impacting the nation,” it added.

The U.S.-Mexico border was the most secure it had been in decades under then-President Donald Trump’s immigration and border enforcement policies. His “Remain In Mexico” directive, which was agreed to by Mexican leaders, was widely credited as the best of those policies.

Biden, however, reversed all of them on his first day in office. Federal courts eventually ruled that his reversals were legal. Now, 19 months later, nearly 4.5 million people — that we know of — have crossed illegally into the U.S., and taxpayers are supporting them. It’s an impeachable offense.

But Biden’s handlers want the chaos so it will be left to brave governors like Abbott to fight back.

Advertisement OPINION: This article may contain commentary which reflects the author’s opinion. The Minnesota Supreme Court quickly intervened last week in response to an error involving election ballots from two counties. According to a report by the Tennessee Star, the counties sought guidance from the state’s high court after they sent out erroneous ballots to […]

Dave Chappelle reportedly switched his opening monologue for NBC’s Saturday Night Live prior to this weekend’s live broadcast, jettisoning a joke about an SNL staff writer who boycotted the episode in protest of the comedian. Chappelle did a “fake” SNL  monologue during the show’s dress rehearsal, and then switched his material for the live show, sources told […]

Advertisement OPINION: This article may contain commentary which reflects the author’s opinion. The Biden administration has lost another case in federal court regarding the Second Amendment. According to reports last week, U.S. District Judge Joseph Goodwin in Charleston, W. Va., ruled that a federal ban on guns without a serial number or with a serial […]