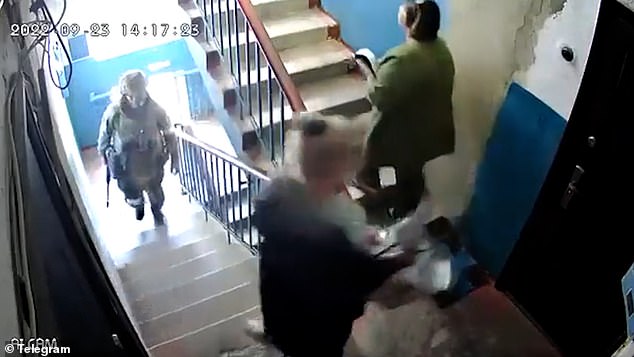 The Kremlin appears to have sent soldiers to force Ukrainians to vote in its staged referendums at gunpoint, according to residents who say troops came to their homes in occupied territories to enforce the ‘vote’.

‘My family was just forced to vote at gunpoint in Russian cosplay of a “referendum” in southern Ukraine,’ said Maxim Eristavi, journalist and co-founder of Hromadske International, a broadcasting station in Ukraine.

The Ukrainian journalist posted a video purporting to show armed soldiers entering the hallways where his family live and forcing them to vote in favour of joining Russia.

Western countries have accused Russia of staging illegitimate referendums in Ukraine as a pretext for annexing parts of its neighbour.

Kyiv called out the exercise as a bare-faced attempt by Russia to hold on to occupied territory now threatened by the Ukrainian army’s counter-offensive.

Eristavi added that his family members were also forced to take part in the same exercises in Crimea, which Russia annexed in 2014 — in an attempt to fool foreign audiences into thinking the voting was free and fair.

Donetsk, Luhansk, Zaporizhzhia, Kherson, and Crimea are all Ukrainian regions at least partially under Russian occupation where the referendums are being held — with the results fixed by Moscow.

Russian state media said the armed guards enforcing the door-to-door voting are there for ‘security’.

Russian Foreign Minister Sergei Lavrov said the regions where votes are underway would be under Moscow’s ‘full protection’ if they are annexed by Russia.

He said any territory which is ‘further enshrined’ into Russia will be ‘under the full protection of the state’.

The four-day vote saw residents forced into voting and banned from leaving their area, according to Kyiv.

The votes allow Putin to spin the narrative to his own people that any Ukrainian attack to try and reclaim its territories is an assault on Russia itself — allowing the Kremlin to justify mass mobilisation, which more than 2,000 Russians have been arrested for protesting against.

Serhiy Haidai, governor of occupied Luhansk, said some towns under Russian occupation have been entirely sealed off to ensure people vote — with any crosses in the ‘no’ column recorded in a ‘notebook’.

One woman in Melitopol told the BBC there was one ballot for the entire household, rather than for separate residents.

Meanwhile state media reported an unfeasibly high 97 per cent of people in two of those regions — Donetsk and Luhansk — are in favour of joining Russia.

Chechen soldiers show up at the apartments of Ukrainians in Russian-occupied areas, trying to force them to vote for the annexation of Ukrainian lands to the Russian Federation in the sham referendum that Putin ordered. pic.twitter.com/YJD6P4gxvu

Ballot boxes have also been opened across Russia itself, ostensibly to allow displaced Ukrainians to vote, but in reality offer more opportunities for vote rigging.

In-person voting will take place exclusively on September 27, state media said. But the result is not in doubt.

‘The United States will never recognize Ukrainian territory as anything other than part of Ukraine,’ said President Biden in a release.

‘Russia’s referenda are a sham – a false pretext to try to annex parts of Ukraine by force in flagrant violation of international law, including the United Nations Charter.’

Valentina Matviyenko, chair of Russia’s upper parliament house, said that residents of the occupied regions were voting for ‘life or death’ at the referendums.

Denis Pushilin, separatist leader of Moscow-backed authorities in the Donetsk region, called the referendum on Friday ‘a historical milestone.’

Vyacheslav Volodin, speaker of Russia’s lower house of parliament, the State Duma, addressed the occupied regions Friday in an online statement, saying: ‘If you decide to become part of the Russian Federation — we will support you.’

Western leaders have declared the referenda to be a sham, saying they have no legitimacy while urging other governments not to recognise the results.

Putin declared the ‘partial mobilisation’ of Russia’s population, forcing hundreds of thousands of men into the military, after the Ukrainian army retook large swathes of territory invaded by Russia in the brutal war sparked on February 25.

As the votes was getting underway in the occupied regions, Russian social media sites were full of dramatic scenes of tearful families bidding farewell to men departing from military mobilization centers.

In cities across the vast country, men hugged their weeping family members before departing as part of the draft.

‘Russian commanders do not care about the lives of Russians — they just need to replenish the empty spaces left by the dead, wounded, those who fled or the Russian soldiers that were captured,’ said Ukrainian president Zelensky on Saturday.

Russian anti-war activists, in the meantime, planned more protests against the mobilisation.

Sen. Ron Johnson (R-WI) slammed Democrat Mandela Barnes in Friday’s debate for allowing 15 percent of Wisconsin’s inmate population out of jail on parole. Johnson said: The lieutenant governor, when he assumed the legislature, wrote a bill to eliminate cash bail, one of the methods we can use to make sure dangerous criminals stay in […]

Hundreds of activists carrying flags and banners rallied against the Iranian government and the death of Mahsa Amini outside the G-7 foreign ministers meeting in Munster on Thursday. Demonstrators were seen holding signs with messages such as ‘Iranian embassies in Europe are Terror centres and must be closed’ and ‘IRAN, Rising For Freedom’. The National […]