Republicans in Georgia’s top midterms races have an edge over their Democrat opponents, according to a poll published Tuesday.

The poll is the latest to suggest Walker, a well-liked former Georgia football star, has picked up momentum in the race, and the poll aligns with most polls since August that have shown Walker making small gains on Warnock.

Warnock, who is not only down but also not near the 50 percent threshold needed to avoid a runoff, has reason to be concerned about the poll results.

The Georgia Democrat has dipped two points overall since the last AJC poll taken in July, and in a race where both candidates are black, among black voters Warnock is down significantly from where a vulnerable incumbent Democrat typically aims to be. 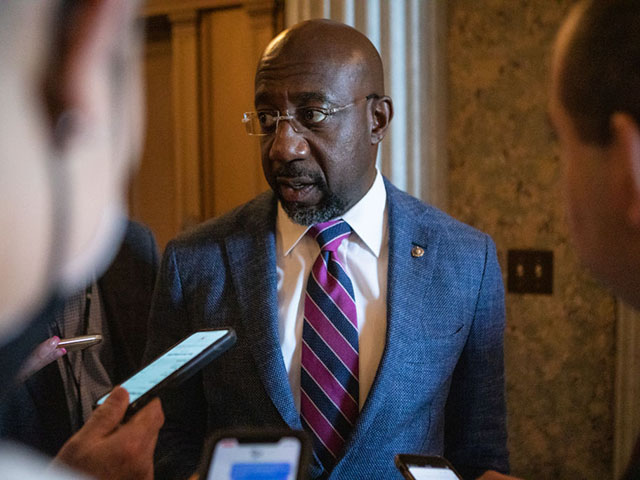 Sen. Raphael Warnock speaks to reporters as he departs a vote on the Senate floor on Capitol Hill on August 6, 2022, in Washington, DC. (Anna Rose Layden/Getty Images)

Georgia is a top battleground where the U.S. Senate race is one of just a few races in the country that could determine which party controls the Senate next year.

“No matter what the numbers show, Herschel will continue to work harder than anyone else to show the people of Georgia that he is the best choice in this race,” Kiley added.

In the swing state’s other top race, Gov. Brian Kemp (R) has expanded his lead from five points in the last AJC poll to now eight points over Democrat candidate Stacey Abrams.

The grim results for Abrams led to one pro-Abrams pollster opining on social media that the AJC, Georgia’s largest newspaper, had published “bad polling.” Evoking one of Abrams’ top issues since her first gubernatorial loss in 2018, the pollster added, “This seems a lot like voter suppression by poll.”

Man, even Abrams’ pollster is on point with the voter suppression narrative… with @ajc polls nonetheless! #gapol https://t.co/Pwk3lraAog

Aside from the Senate and gubernatorial contests, the AJC noted “Democrats fare no better” in other races in the state further down ticket.

The poll was conducted September 5 to 16 among 861 likely general election voters and had a margin of error was plus or minus 3.3 percent.

Scores of supporters of Brazilian President Jair Bolsonaro took to the streets in Rio de Janeiro on Wednesday, protesting against president-elect Luiz Inacio Lula da Silva taking power. Footage shows protesters carrying banners and shouting slogans denouncing the election result such as “Federal Intervention” and “Armed Forces Save Brazil!”, while some of them could be […]

Vulnerable Democrat Rep. Angie Craig (MN) has attempted to hide her anti-law enforcement history by recently reversing her stance on eliminating qualified immunity for police officers before a tough reelection battle. The Minneapolis Star Tribune reported this month that Craig, who will face Republican Tyler Kistner in November, is trying to reverse some of her previous stances after she voted […]