A Biden administration climate appointee once studied at Tsinghua University, a Chinese Communist Party-controlled university that also does research for the People’s Liberation Army.

The Office of the Comptroller of the Currency (OCC), a bureau within the United States Treasury which “regulates national banks …  and federal savings associations,” announced last week that Yue (Nina) Chen would serve as chief climate risk officer for the department. During her time there, she will develop the department’s “climate risk management frameworks for the federal banking system.”

Chen earned a bachelor’s degree in chemical engineering from Tsinghua University in Beijing, China. The university is funded by the CCP’s Ministry of Education and is considered “very high risk” because of its involvement in a “high level of defense research and alleged involvement in cyberattacks” on behalf of the Chinese military.

The Washington Free Beacon, which first wrote about Chen, reported on her past position as a climate regulator in New York:

Chen, who previously held a climate regulator position at the New York State Department of Financial Services, is a proponent of “environmental, social, and governance” guidelines, a socially progressive approach to investing known as ESG. Under ESG, investment managers and insurance companies gauge companies’ risk based on their commitment to progressive goals in the areas of diversity and climate change. Chen spoke at a panel last year on the topic of pressuring industries to “finally leave fossil fuels behind” and redirect their investments “toward solving the climate crisis.”

However, Chen is not the first controversial person under Biden’s administration to be mentioned for an OCC post. Last year, President Joe Biden nominated Saule Omarova to oversee the OCC, which would have given her the “most powerful, least accountable” position over cryptocurrencies and the banking industry if confirmed. 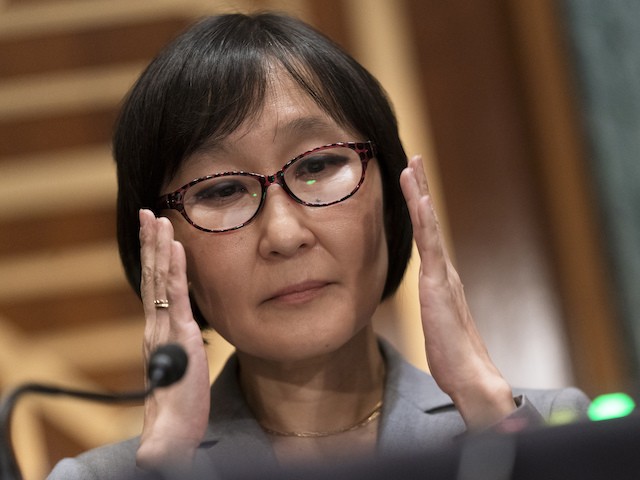 Saule Omarova testifies before a Senate Banking, Housing, and Urban Affairs hearing on Capitol Hill in Washington to examine her nomination to be the Comptroller of the Currency, November 18, 2021. (Manuel Balce Ceneta/AP)

Omarova, a professor at Cornell Law School before being nominated, had a very controversial nomination process before she withdrew her nomination after Democrats and Republicans opposed her radical views on eliminating community banks and fossil fuel companies.

She also drew scrutiny for attending Moscow State University as a student on a scholarship named for Vladimir Lenin. In addition, she allegedly removed references to a thesis she wrote during her time at the university called  “Karl Marx’s Economic Analysis and the Theory of Revolution in The Capital.”

The executive director of Consumers’ Research, Will Hild, voiced his concern over Chen to the Free Beacon, explaining that “her appointment is part of Biden’s effort to establish controversial ‘environmental, social, and governance’ policies at federal agencies.”

Jacob Bliss is a reporter for Breitbart News. Write to him at [email protected] or follow him on Twitter @JacobMBliss.

Joe Biden Is ‘Cognitively Impaired,’ May Lead Us to WWIII – Market Subset News

Former President Donald Trump said during a Save America rally in North Carolina on Friday that President Joe Biden is “cognitively impaired” and warned that his leadership might lead the United States into World War III. Trump’s comments on Biden’s mental capacity came during the end of his rally, when he talked about America being […]