Lawyers representing some of those involved claimed their clients “were induced to board airplanes and cross state lines under false pretenses,” including promises of working opportunities, schooling for their children and immigration assistance, by people working with and on behalf of Florida Gov. Ron DeSantis (R), the Washington Times reports.

Lawyers for Civil Rights (LCR) further accused Florida of targeting the migrants “based on race and national origin” in an attempt to make a political statement.

LCR, which counts about 30 of the migrants as clients, claimed the trip had consequences for those who may miss immigration check-ins and were left on an island where job prospects for adults and education opportunities for children are in slim supply, the report set out.

“They preyed on the vulnerability of our clients — many of whom had suffered deep trauma in their home countries and on their journeys to the United States — and exploited this vulnerability to win trust through false promises,” LCR Executive Director Ivan Espinoza-Madrigal said in letters addressed to Massachusetts’ attorney general and U.S. attorney.

LCR further alleged migrants were told they could find work, schools and immigration assistance if they got on the planes and headed north.

Some migrants said they were told they would head to Boston, only to be told mid-flight they were going to Martha’s Vineyard, LCR said. 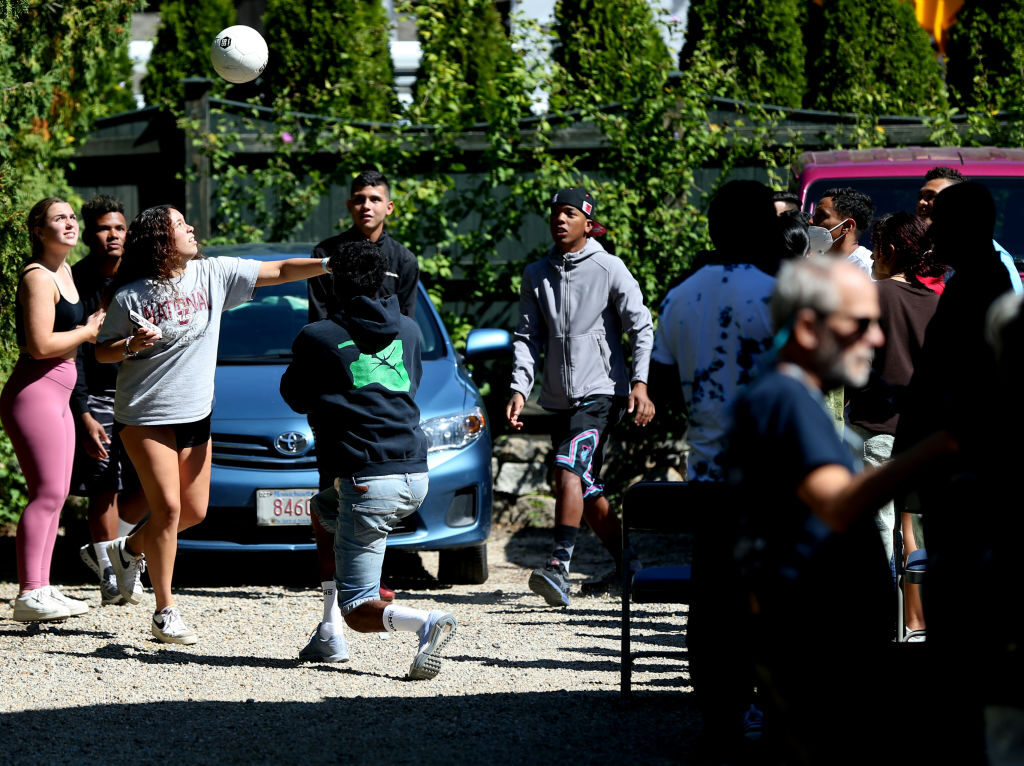 Volunteers and migrants tossed a soccer ball around at the St. Andrew’s Parrish House in Edgartown, where migrants were being fed lunch with donated food from the community. Two planes of migrants from Venezuela arrived suddenly Wednesday night on Martha’s Vineyard. (Jonathan Wiggs/The Boston Globe via Getty Images)

As Breitbart News reported, Florida Gov. Ron DeSantis (R-FL) is responsible for two planes full of immigrants that landed at Martha’s Vineyard in Massachusetts on Wednesday.

In Florida, we take what is happening at the southern border seriously.

We are not a sanctuary state, and we will gladly facilitate the transport of illegal immigrants to sanctuary jurisdictions. pic.twitter.com/YeEbMzy8yG

“States like Massachusetts, New York and California will better facilitate the care of these individuals who they have invited into our country by incentivizing illegal immigration through their designation as ‘sanctuary states’ and support for the Biden administration’s open border policies,” Fenske said.

Analysts at RealClearPolitics, who predict the probable outcomes of elections, moved New York’s gubernatorial race from “Lean Democrat” to  “Toss-up” roughly three weeks before the election between Democrat Gov. Kathy Hochul and Republican Rep. Lee Zeldin. The rating change happened on Saturday, just over three weeks before the election. The polling comes as Zeldin is within six points of Hochul on […]

A Chicago man allegedly attacked a woman before stealing her vehicle on September 24 and officials are trying to identify him. The incident occurred that evening in the 1500 block of West Monroe Street when law enforcement said the armed man targeted the woman and snatched her keys, Fox 32 reported Saturday. Surveillance footage showed […]

An illegal alien, initially accused of plotting a shooting on July 4th this year with another illegal alien, has been sentenced to fewer than six months in federal prison for having illegally re-entered the United States for the third time. Donate Please Add coin wallet address in plugin settings panel As Breitbart News reported, 52-year-old illegal […]