The governor of California, Gavin Newsom, has signed a bill into law that would require social media companies to report their content moderation policies to the state government, legislation that even the Washington Post admits is “controversial.”

In a press release, Gov. Newsom (D) made it clear that the goal of the bill, A.B. 587, is to clamp down on certain types of First Amendment protected content on social media. 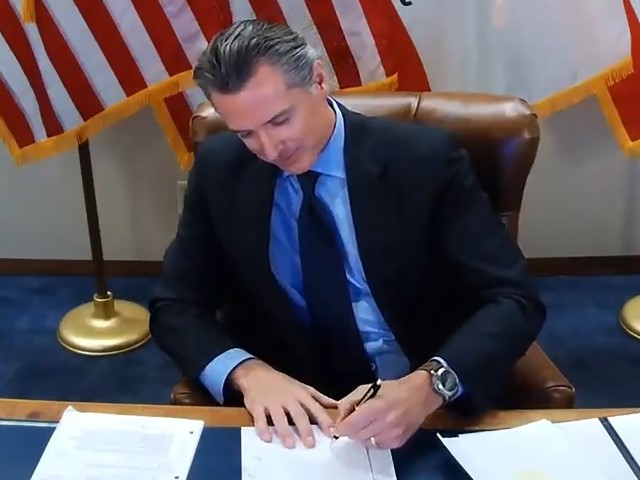 “California will not stand by as social media is weaponized to spread hate and disinformation that threaten our communities and foundational values as a country,” said Newsom.

California Gov. Gavin Newsom has signed a controversial bill into law that aims to force greater transparency of social media companies, setting up a potential battle over whether such measures violate free-speech protections.

The California effort is likely to draw the same opposition from tech companies and their trade groups that has greeted the Republican-led efforts. Chamber of Progress, an industry coalition that includes Facebook parent company Meta and Google, said Wednesday it is “absolutely” looking at potential court challenges, saying such mandates raise First Amendment issues.

“It’s like requiring a bookstore to report to the government which books it carries, or requiring the New York Times to explain which stories it publishes,” said Adam Kovacevich, the coalition’s CEO.

The California bill is further evidence of the Democrats’ determination to have social media companies collude with the government on censorship.

In the Senate, the Democrats’ point woman on tech regulation, Sen. Amy Klobuchar (D-MN), recently withdrew her much-derided Journalism Competition and Preservation Act (JCPA) from a markup hearing, after Sen. Ted Cruz (R-TX) added an amendment that would prohibit media companies from colluding with Big Tech on censorship.

“If this is in it, we can’t support the bill,” said Sen. Klobuchar, revealing how important it is to Democrats that tech companies are allowed to coordinate their censorship with other elite-controlled institutions.

Advertisement OPINION: This article may contain commentary which reflects the author’s opinion. Supreme Court Justice Samuel Alito made a startling claim this week about the leak of his draft opinion in May, which overturned the 1973 Roe v. Wade decision legalizing abortion throughout the country. During a speaking event at the right-leaning Heritage Foundation on […]

Missing Princeton University undergraduate student, Misrach Ewunetie 20, who was reported missing last week, has been found dead. According to WNBC, Ewunetie’s body was found ‘near the edge of the Princeton campus, near tennis courts and a more remote area restricted to authorized vehicles.’ There were no preliminary signs of trauma, the report said. Ewunetie […]