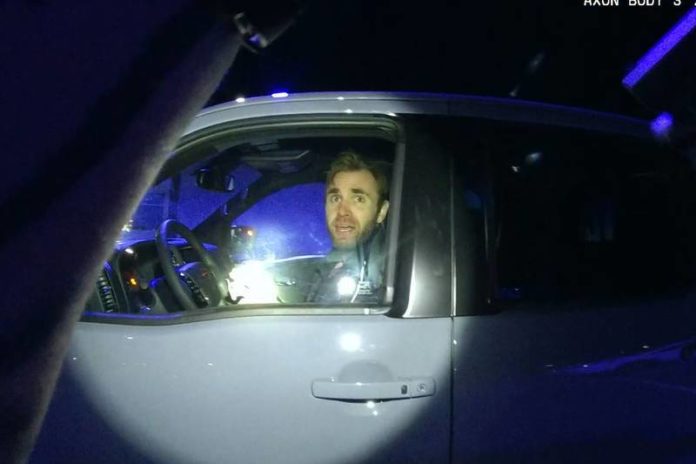 Concord, North Carolina — On Sunday, February 13, 2022, at approximately 5 a.m., Concord police officer Timothy Larson went to the parking lot of a Nissan dealership to investigate a possible auto theft. Officer Larson arrives to find 29-year-old Brandon Combs has the door open, while he was sitting inside a Nissan Frontier truck at the dealership. The DA’s Office said Combs was wearing dark clothing, sitting in the driver’s seat, and had been released from jail about 36 hours prior. They said Larson wasn’t aware Combs had a felony fugitive warrant pending from another state and several felony convictions on his record. Combs says to the officer “Take your gun off,” as Larson walks up with a flashlight and asks what is going on.

Larson then tries to get Combs to step out of the truck and Combs refuses. Larson briefly took cover behind a white van before continuing to yell commands at Combs. Combs runs from the truck towards the police SUV and gets inside. Larson chases after. Larson approaches Combs in the police SUV directly in front but at a distance, with Larson positioning himself to the passenger side of the front of the SUV as he gets closer. Larson fires five shots before calling in “shots fired” on his radio and shooting once more at Combs. Combs was later pulled from the SUV by police and given aid until EMS arrived. He was taken to the hospital where he passed away from his injuries, authorities said.

The Concord Police Department and SBI looked into the shooting and questioned Larson about his actions.

Officer Larson was fired in May. According to a notice of dismissal, the officer refused to answer questions following the shooting, and gave misleading or untrue answers in other instances to his superiors and the State Bureau of Investigation, which handled the shooting investigation. In late August, the Cabarrus County District Attorney’s Office announced former officer Timothy Larson would not face any charges in the deadly shooting. Combs’ mother, Virginia Tayara, filed a lawsuit in August 2022 against Larson and the Concord Police Department in federal court, on claims of excessive force, assault and battery, wrongful and intentional death and gross negligence.

Germany: ‘We do not freeze for your policy’ – Thousands march against soaring energy costs in Zwickau

Over a thousand protesters took to the streets of Zwickau on Sunday to voice their discontent with the federal government’s handling of the energy crisis and soaring inflation. Protesters were seen holding banners and signs with anti-establishment messages such as ‘We do not freeze for your policy!’, ‘Get out of NATO!’ and ‘Peace with Russia!’. […]

Problems with cancer? You can see the reasons pictured here OMG…. Jesus Christ….. we’ve said it so many times in some of our previous articles… Lefists of today are so stupid they aren’t even proper leftists. Here’s the latest idiotic thing leftists are saying. The number of cancer cases have skyrocketed recently in Europe…. […]