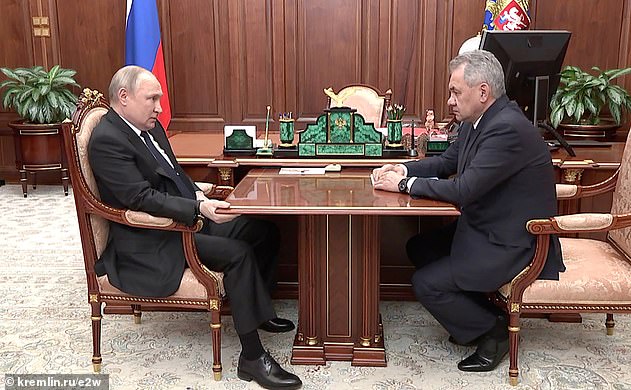 Russia has been forced to resort to buying millions of rockets and artillery shells from impoverished North Korea for its ongoing invasion of Ukraine amid crippling Western sanctions and devastating war losses, US officials have said.

A US official, who spoke on condition of anonymity, said on Monday that the fact Russia is turning to the isolated state of North Korea demonstrates that ‘the Russian military continues to suffer from severe supply shortages in Ukraine, due in part to export controls and sanctions.’

U.S. officials believe that the Russians could look to purchase additional North Korean military equipment in the future, according to a newly downgraded intelligence finding that was first reported by the New York Times.

The U.S. official did not detail how much weaponry Russia intends to purchase from North Korea.

The finding comes after the Biden administration recently confirmed that the Russian military in August took delivery of Iranian-manufactured drones for use on the battlefield in Ukraine.

The White House said last week that Russia has faced technical problems with Iranian-made drones acquired from Tehran in August for use in its war with Ukraine.

Russia picked up Mohajer-6 and Shahed-series unmanned aerial vehicles over several days last month as part what the Biden administration says is likely part of a Russian plan to acquire hundreds of Iranian UAVs for use in Ukraine.

North Korea has sought to tighten relations with Russia as much of Europe and the West has pulled away, blaming the United States for the Ukraine crisis and decrying the West’s ‘hegemonic policy’ as justifying military action by Russia in Ukraine to protect itself.

The North Koreans have hinted interest in sending construction workers to help rebuild Russian-occupied territories in the country’s east.

North Korea’s ambassador to Moscow recently met with envoys from two Russia-backed separatist territories in the Donbas region of Ukraine and expressed optimism about cooperation in the ‘field of labor migration,’ citing his country’s easing pandemic border controls.

In July, North Korea became the only nation aside from Russia and Syria to recognize the independence of the territories, Donetsk and Luhansk, further aligning with Russia over the conflict in Ukraine.

The North’s arms export to Russia would be a violation of U.N. resolutions that ban the country from exporting to or importing weapons from other countries. Its possible dispatch of laborers to the Russian-held territories in Ukraine would also breach a U.N. resolution that required all member states to repatriate all North Korean workers from their soil by 2019.

There have been suspicions that China and Russia haven’t fully enforced U.N. sanctions on North Korea, complicating a U.S.-led attempt to deprive North Korea of its nuclear weapons.

The provocative move by North Korea comes as the Biden administration has become increasingly concerned about stepped-up activity by North Korea in pursuit of nuclear weapons.

North Korea has test-fired more than 30 ballistic missiles this year, including its first flights of intercontinental ballistic missiles since 2017, as leader Kim Jong Un pushes to advance his nuclear arsenal despite U.S.-led pressure and sanctions.

The U.S. has frequently downgraded and unveiled intelligence findings over the course of the grinding war in Ukraine to highlight plans for Russian misinformation operations or to throw attention on Moscow’s difficulties in prosecuting the war. Ukraine’s smaller military has put up a stiff resistance against the militarily superior Russian forces.

Russian President Vladimir Putin and Kim Jong-Un have recently exchanged letters in which they both called for ‘comprehensive’ and ‘strategic and tactical’ cooperation between the countries.

Moscow, for its part, has issued statements condemning the revival of large-scale military exercises between the United States and South Korea this year, which North Korea views as an invasion rehearsal.

Russia, along with China, has called for the easing of U.N. sanctions imposed on North Korea over its nuclear and missile tests.

Both countries are members of the U.N. Security Council, which has approved a total of 11 rounds of sanctions on the North since 2006. In May, Russia and China vetoed a U.S.-led bid to impose new economic sanctions on North Korea over its high-profile missile tests this year.

Some experts say that Kim could likely bolster his resolve to retain his nuclear weapons because he may think the Russian attack happened because Ukraine had signed away its nuclear arsenal.

Relations between Moscow and Pyongyang go back to the 1948 foundation of North Korea, as Soviet officials installed young, ambitious nationalist Kim Il Sung, the late grandfather of Kim Jong Un, as the country’s first ruler.

Since then, Soviet aid shipment had been crucial in keeping North Korea’s economy afloat for decades before the disintegration of the Soviet Union in the early 1990s.

Moscow had since established formal diplomatic relations with Seoul as part of its hopes to draw South Korean investment and allowed its Soviet-era military alliance with North Korea to expire.

But after his election in 2000, Putin actively sought to restore his country’s ties with North Korea in what was seen as an effort to regain its traditional domains of influence and secure more allies to better deal with the United States.

Spread the love The late Queen Elizabeth II was borne on the 120-year-old state gun carriage from Westminster Hall to Westminster Abbey, drawn by a team of Royal Navy Sailors, for the state funeral before final interment in Windsor. The processions follows a tradition created in 1901 at the state funeral of Queen Victoria, when […]

Spread the love Surgeon General Vivek Murthy said Tuesday on MSNBC’s “Morning Joe” despite President Joe Biden claiming the pandemic was “over,” Congress needs to continue to invest funds into America’s response to COVID. Co-host Willie Geist asked, “When the president of the United States says the pandemic is over, what should people watching this […]

Spread the love On Tuesday’s broadcast of MSNBC’s “Alex Wagner Tonight,” White House Press Secretary Karine Jean-Pierre did not deny reporting from NBC that DHS has presented the White House with proposals to send migrants to the U.S.-Canada border and to cities like Los Angeles and responded to a question on how that’s any different […]

Spread the love German Chancellor Olaf Scholz tested positive for COVID-19 on Monday, as Deputy Spokesperson of the Federal Government Wolfgang Buchner said during press conference in Berlin on Monday. Scholz has ‘mild cold symptoms’, according to the German government. After receiving the test results, Scholz was immediately isolated in the Chancellor’s flat at the […]

Lebanon: ‘We have the right to enter whenever we want’ – Retired soldiers attempt to storm Parliament building in Beirut

Spread the love Hundreds of retired military personnel clashed with security forces as they attempted to break into the Lebanese Parliament in Beirut on Monday, during a rally over the rising costs of living. The scuffles broke out as lawmakers were in session to vote on a contentious new budget. The veteran servicemen were demanding […]

Spread the love Portugal and Manchester United superstar Cristiano Ronaldo was back in training in Braga on Monday after sustaining a nasty-looking face injury over the weekend. The 37-year-old was given a bloody nose after colliding with Czech goalkeeper Tomas Vaclik during the Nations League match on Saturday. “We had a two-day break, then played […]

Spread the love German government spokesperson Wolfgang Buchner expressed a belief that Italy will not cease to be a ‘Europe-friendly country’ after the snap elections held in the country, during a press conference in Berlin on Monday. “We must first wait for the official final result of this election as well, and then look at […]

Spread the love Hundreds of corgis and their owners gathered in Daxing, Beijing on Saturday for an annual party, which returned this year following the COVID-19 pandemic. “I believe it is worth the wait. Sure enough, the weather is very good today” said Liv Yiran, a corgi owner. “Their life is actually very short, we […]

tech news:Oppo A83 With 3GB of RAM Launching in India on Saturday, – Visual News Network

Spread the love Spread the love Unrest erupted around Al-Aqsa mosque in East Jerusalem on Monday, as Jewish visitors toured, under Israeli police protection, the flashpoint Temple Mount to mark the Jewish new year. The visitors walked around the third-holiest place in Islam, Al-Aqsa, before clashes erupted, as Palestinians launched fireworks toward Jewish settlers. Police […]

Spread the love Asalam o alikum dear viewers, today i am here with you to discuss the latest terra luna crypto news update as we all know that binance resume UST & teraluna trading in BUSD pair.so is it really posible to earn millions in LUNA trading if it kills its zeros ?what happens after […]

Spread the love Dozens of civil defense workers were seen tackling the remains of a fire that broke out at the Hyundai Premium Outlet in Daejeon on Monday. Most of the fire has been under control, with little smoke coming out of the building and background. They also continued to search for missing people inside […]

No comments to show.