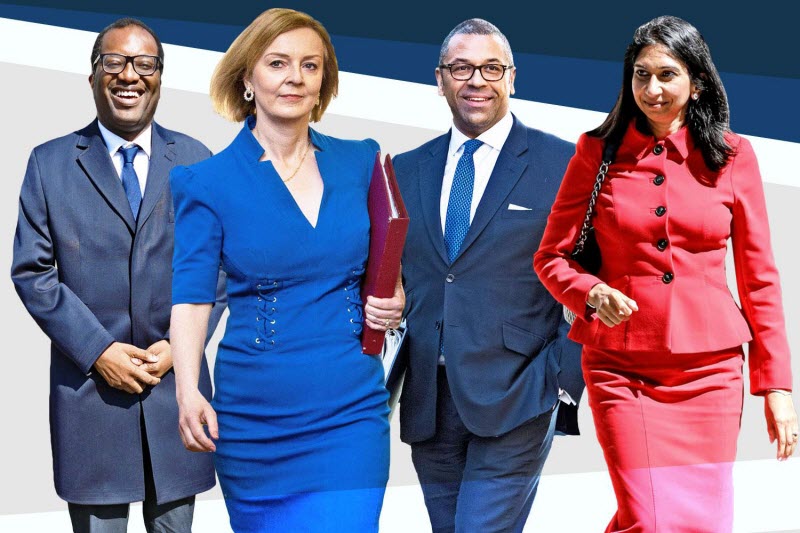 The UK’s new Prime Minister Liz Truss is expected to appoint a Cabinet with no white men in the four great offices of state for the first time in history according to reports.

The new leader is set to name a cabinet that will contain zero white men, according to the Times.

“Great offices of state set to contain no white men” the headline read.

The PM’s new likely top team is also being described as the most right-wing government in a century.

The Mail Online reporst: Ms Truss is expected to make long-term ally Kwasi Kwarteng chancellor, with Suella Braverman moving to the Home Office and James Cleverly to the Foreign Office.

If selected, Mr Kwarteng would be the fourth non-white chancellor in a row, directly following Sajid Javid, Rishi Sunak and Nadhim Zahawi.

And Ms Braverman would become the third minority home secretary, after Priti Patel and Mr Javid.

But equally as interesting as who will be in the new Government is who will not be in it.

There is expected to be a clear out of Rishi Sunak and his supporters after a bitter blue-on-blue campaign in which he seems almost certain to be defeated.

Into the political wilderness too will go Michael Gove, after serving under the three previous PMs. Dominic Raab, the First Secretary of State, and Boris Johnson himself, are expected to return to the backbenches. Both have question marks over whether they can hold on to their seats at the next election.

There is also expected to be a clear out of political advisers within No10. The Times today suggests only a handful of long-serving advisers will be kept on as Truss seeks to slim down the operation.

NASA is expected to launch the Northrop Grumman’s Antares rocket and uncrewed “SS Sally Ride” Cygnus cargo spacecraft to the International Space Station on Sunday, November 6. The 18th resupply mission will deliver scientific investigations in the areas of biology and biotechnology, Earth and space science, physical sciences, and technology development and demonstrations. The launch […]